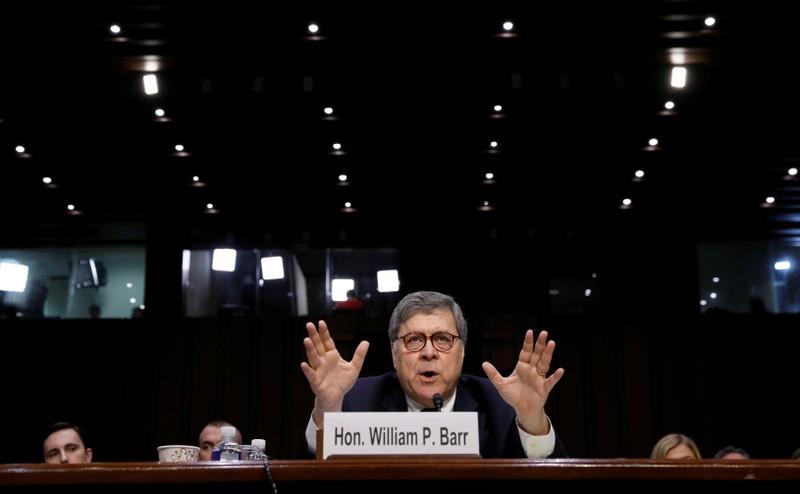 This week, the Senate is holding confirmation hearings for William Barr, Donald Trump’s nominee to replace Jeff Sessions as U.S. attorney general. At these hearings, Barr has mostly said the right things, coming off as a competent public servant who will protect the independence of the Justice Department from presidential pressure. But Barr’s words can only be of limited reassurance given his previous attacks on the Mueller investigation and many other potential concerns about his record.

Perhaps the biggest concern about Barr’s fitness to serve as the nation’s top law enforcement official is the 19-page memo he wrote last year attacking Special Counsel Robert Mueller’s  investigation into Russian involvement in the 2016 election, using arguments essentially indistinguishable from Trump’s own. According to Barr, the Mueller investigation “should not be permitted to demand that the President submit to interrogation about alleged obstruction” because its theory of obstruction was “fatally misconceived.” As the legal scholar Marty Lederman explained, however, Barr’s arguments were not only weak in themselves but made assumptions about how Mueller’s investigation was proceeding that had no factual basis. Barr’s arguments also appeared to contradict statements he had made in defending former independent counsel Ken Starr’s investigation of President Bill Clinton’s relationship with Monica Lewinsky.

In short, it seems as if Barr’s memo started with the conclusion that Mueller’s investigation should not seriously investigate Trump’s highly suspicious actions (such as firing FBI Director James Comey after he refused Trump’s request to “let go” of the investigation of former national security adviser Michael Flynn) and reverse-engineered an argument to defend the proposition. This is not an attractive form of reasoning for a potential attorney general tasked with maintaining the independence of the department.

To make things worse, CNN revealed earlier this week that Barr sent or discussed his memo with Trump’s legal team, raising further questions about his independence from Trump should he be confirmed. And as if to reinforce his partisan nature, Barr asserted in a 2017 email to the New York Times that there was more basis for investigating the Clinton Foundation based on the Uranium One pseudo-scandal than for investigating Trump.

And while his memo about the Mueller investigation is particularly disturbing, as Matthew Yglesias of Vox observes there are other disturbing aspects about Barr’s record. Barr, as you would expect of a Trump nominee, is a hardliner on immigration, and supported building a fence on California’s border with Mexico. He was a major proponent of mass incarceration when he served as attorney general and deputy attorney general for the George H.W. Bush administration. In particular, Barr favored much longer sentences for nonviolent drug offenders – reflected in the Crime Control Act of 1990 – including the massive disparity in sentences for crack and powdered cocaine that are now widely seen as racially discriminatory. In a political context,  the problems of mass incarceration can produce rare bipartisan legislative agreement, so for this part of his record Barr deserved to face scrutiny.

Taken at face value, Barr’s response to tough questioning would provide some reassurance. Barr disagreed with Trump’s characterization of the Mueller investigation as a “witch hunt” and insisted that if asked by the president to fire Mueller, he “would refuse to carry out that instruction.” At one point, Barr asserted that “I will not be bullied,” at times evoking Elliot Richardson – the attorney general who served under Richard Nixon during the Watergate scandal and resigned rather than obey Nixon’s order to fire the Watergate special prosecutor. Barr appeared to back off from his earlier implications that the Clinton Foundation should be investigated over Uranium One. He also expressed disagreement with his predecessor Jeff Sessions’ announced intention to crack down on marijuana dispensaries that are legal under state law.

And yet, Senate Democrats remained skeptical after the hearings. And for good reason. Barr is a professional who has been through the confirmation wringer before. There’s no question he knows what to say to get the job, but the pro-Trump arguments he made before being nominated leave serious concerns about his ability to act independently of Trump once he gets confirmed.

There is a more fundamental problem. Sessions, the first sitting member of Congress to endorse Trump for the Republican administration, was highly compatible with Trump ideologically. Trump forced him to resign for one reason only: he refused to compromise the independence of the Mueller investigation. Trump apparently thinks that Barr will be less independent than Sessions was, and Barr’s record leaves ample concerns that Trump’s faith in him is justified.