Buckingham Palace has shared footage of the Queen carrying out a video engagement at Windsor Castle, the first time she’s been seen since it was announced she won’t be going to COP26 in Glasgow.

During the virtual audience, the Queen is seen presenting David Constantine with The Queen’s Gold Medal for Poetry.

In the short clip the Queen jokes about having to speak to him via video link saying: “I’m very glad to have the chance to see you, if only mechanically this morning!”

Speaking about the medal, she added: “I don’t know what you do with it, do you put it in a cupboard?” Replying Mr Constantine said: “Somewhere safe, yes. This evening I shall show it to my children and my grandchildren who are waiting in our house.”

The Queen replied: “Ah right, well that will be nice. Well it is rather a nice medal isn’t it.”

Mr Constantine was joined by the Poet Laureate, Professor Simon Armitage, who physically handed him the medal at Buckingham Palace, while the Queen spoke to them from Windsor Castle.

On Tuesday night, it was confirmed the Queen will not be attending the COP26 climate summit, where she was due to host a reception for world leaders and delegates.

The palace said in their statement: “Following advice to rest, The Queen has been undertaking light duties at Windsor Castle. 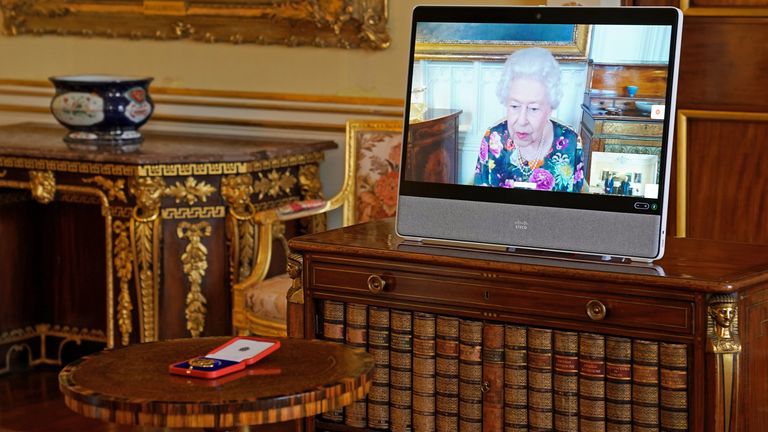 “Her Majesty has regretfully decided that she will no longer travel to Glasgow to attend the Evening Reception of COP26 on Monday, 1st November.

“Her Majesty is disappointed not to attend the reception but will deliver an address to the assembled delegates via a recorded video message.”

Last week the Queen cancelled a trip to Northern Ireland and spent a night in hospital after having “preliminary investigations”. It’s not been made clear what she was being tested for.

The palace has since said that she is still doing light duties, and remains in good spirits as she has carried out virtual engagements and other work at Windsor Castle.

The Prince of Wales, the Duchess of Cornwall, and the Duke and Duchess of Cambridge, who were always due to support the monarch at the reception, will continue to attend the event in Glasgow on Monday.