There were scenes of jubilation at parks, beaches, sports venues and tourist sites as friends and family were finally reunited. And glorious spring sunshine, with temperatures climbing to 66F (19C), added to the delight. There seemed nothing gradual about this initial lifting of restrictions in England as people embraced exercise boot camps, a wedding or two and even some midnight golfing.

After a year of on-off restrictions, Happy Monday seemed a huge boost of confidence in the Government’s much-debated roadmap to freedom.

Friends and families were able to meet up for the first time in months, albeit with social distancing rules still in place.

English Heritage said it had successfully reopened some 60 venues, though it was a bookings-only service for visitors at the likes of Dover Castle and the Battle of Hastings site in East Sussex.

On the coast, the warm weather and loosening of restrictions led to busy scenes at beaches including Brighton and Bournemouth.

Those missing their beloved outdoor sports were also overjoyed by yesterday’s first move back towards normality.

As the new rules were ushered in at midnight on Sunday, golfers in Ilkeston, Derbyshire, used neon balls to tee off in the dead of night. 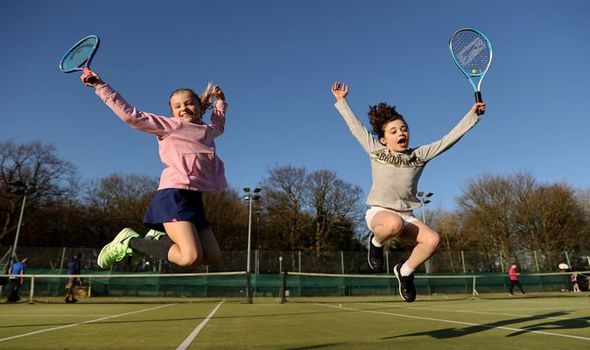 Seven teams used the glow in the dark balls and floodlit greens in a match to raise funds for Nottingham Breast Cancer Research Centre.

A few hours later, bosses at golf courses across the country woke up to long queues as players deprived of a round for months returned at the first chance.

Other outdoor sports were also reopened for business yesterday, with tennis courts, swimming pools and bowls greens across the nation welcoming back enthusiasts.

Many outdoor pools opened before dawn and were greeted by long queues. Drone shots showed the keen uptake of the offer of a swim. Olympic swimmer Sharron Davies said: “The queues are ridiculous. Some of the pools have even had their doors open since 5am to try and get everyone in.

“People are desperate to start to just be more physically active and get into a swimming pool.”

In addition to hitting out- door pools across the country, many also attended Hampstead Heath Ponds and Serpentine Lido, in London, which opened up for the first time in months.

And across the country, tennis club members returned to the courts for the new season.

Boris Johnson said he would be up for a game, while Labour leader Sir Keir Starmer is opting for five-a-side football.

The PM added: “I am personally thrilled that I will be able to play tennis. I do hope we can take advantage of this moment and the beautiful weather to play sport, to take exercise, to have fun and build our national resilience in that way too.”

Sir Keir said he was looking forward to being able to “shout and scream” on the football pitch once again.

David Lloyd gyms welcomed back members yesterday, with classes and equipment in open marquees. In all, the gym chain reopened 79 clubs in England. Chief executive Glenn Earlam said members were “desperate to get out of their houses and go and do something different”.

In Warrington, Cheshire, children headed to Victoria Park rugby league ground for a training session, where they were joined by Culture Secretary Oliver Dowden.

He said: “I’m absolutely delighted. After this dreadful long winter of Covid, spring is in the air and grassroots sport is returning. We said when we went into these dreadful restrictions that grassroots sport should be the last in and the first out. Today, we’re delivering on that.” 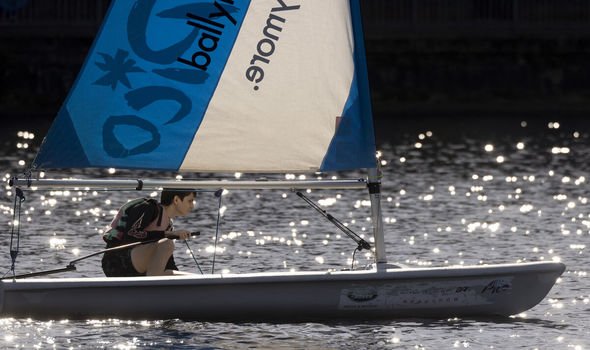 Minister for sport and tourism Nigel Huddleston described yesterday as: “A really big day, for millions of people across the UK just dying to get back to the things that they love.”

He added: “They are taking the responsibilities, those opening up spaces, really seriously with Covid-secure measures. It’s all within guidelines. They’re doing it so very responsibly.”

Up to six people are now allowed to attend weddings and civil partnership ceremonies following the easing of restrictions yesterday.

Couples rushed to their local registry offices yesterday to make the most of the new rules.

Ben and Gabriela Lloyd were the first to wed, tying the knot at St Albans Register Office.

The number allowed to attend ceremonies will rise to 15 people in Covid-secure venues that are permitted to open no earlier than April 12.

Also on April 12, non-essential shops will reopen and pubs and restaurants will be able to serve outdoors.