There have been more than 88,000 coronavirus cases on U.S. university campuses since the start of the pandemic.

Here’s what you need to know: 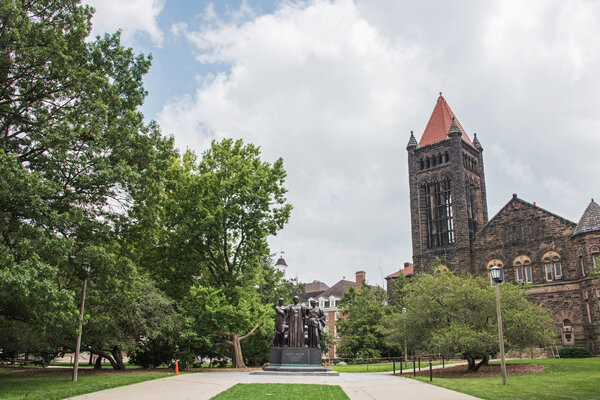 One university showed how even the most comprehensive plan to limit the virus’s spread can break down.

At the University of Illinois at Urbana-Champaign, more than 40,000 students take tests twice a week for the coronavirus. They cannot enter campus buildings unless an app vouches that their test has come back negative. Everyone has to wear masks.

This is one of the most comprehensive plans by a major college to keep the virus under control. University scientists developed a quick, inexpensive saliva test. Other researchers put together a detailed computer model that suggested these measures would work, and that in-person instruction could go forward this fall.

But the predictive model included an oversight: It assumed that students would do what they were told to.

What the scientists had not taken into account was that some students would continue partying after they received a positive test result. “It was willful noncompliance by a small group of people,” one of the scientists said.

After a university-imposed lockdown, the number of new cases has dropped again, and the hope is that all students will now take the protocols more seriously.

A New York Times survey of more than 1,600 American colleges and universities has revealed at least 88,000 cases and at least 60 deaths since the pandemic began. Most of those deaths were reported in the spring and involved college employees, not students. 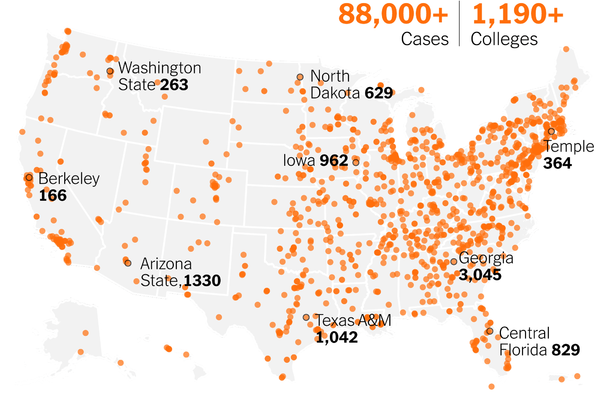 Large outbreaks expanded on campuses as new semesters were underway.

In other education news:

In Des Moines, school began this week with local officials openly defying Iowa’s governor and a judge’s order by teaching remotely. The decision puts the district’s funding and administrators’ jobs at risk, and leaves students locked out of athletics and their parents uncertain whether online classes will even count.

A new study of hospital patients challenges the notion that young people are impervious. The research letter from Harvard found that among 3,222 young adults hospitalized with Covid-19, 88 died — about 2.7 percent. One in five required intensive care, and one in 10 needed a ventilator to assist with breathing. The study “establishes that Covid-19 is a life-threatening disease in people of all ages,” wrote Dr. Mitchell Katz, a deputy editor at JAMA Internal Medicine.

Public schools are obligated to teach millions of students with disabilities. But as learning moves online, many services that parents fought for are at risk.

F.D.A. regulators defend their integrity and allude to potential interference.

In an opinion column published in USA Today on Thursday, eight top regulators at the Food and Drug Administration promised to uphold the scientific integrity of their work and defend the agency’s independence. The column warned that “if the agency’s credibility is lost because of real or perceived interference, people will not rely on the agency’s safety warnings.”

The pledge by career scientists in the federal government came amid mounting concerns over the role the White House has played in emergency approvals for coronavirus therapies, including convalescent plasma and the malaria drug hydroxychloroquine, which the agency later revoked.

The specter of political arm-twisting has grown as several drugmakers entered large late-stage vaccine trials this summer. President Trump told reporters on Monday that “we’re going to have a vaccine very soon, maybe even before a very special date.”

That timeline, framed around Election Day, has been widely challenged by the administration’s top health officials, who have said that a vaccine approval by early November was improbable.

The statement in USA Today was written in large part because of fears over political influence on the F.D.A., including from the White House, according to senior administration officials familiar with the effort.