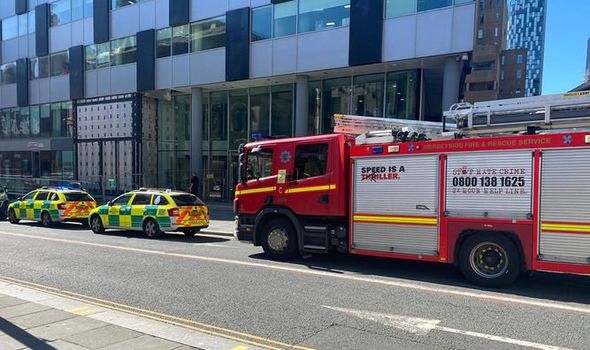 Emergency services dashed to the building in Liverpool city centre on Wednesday afternoon and rushed the pair to hospital, however, a 53-year-old man has since died.

The other victim – an 18-year-old – thought to be the other man’s son – is in a serious condition in hospital, Liverpool Echo says.

A police spokesman said: “Following an incident at a building site on Chapel Street yesterday afternoon (Wednesday 19 May), we can confirm that a 53-year-old man sadly died at the scene.

“The man’s next of kin have been informed and are being supported by specially trained officers at this time.

“The second man, aged 18, was taken to hospital where he remains in a critical condition.

“Emergency services were called to a site around 3.30pm yesterday to reports that the two men had been found seriously injured after falling.

“An investigation is being carried out by detectives and the Health and Safety Executive and officers remain at the scene today (Thursday 20 May) while enquiries are carried out.”

A spokesman for the Health and Safety Executive said: “HSE are aware and are investigating with the police.”

It is understood both men are from Castleford, West Yorkshire.

One worker at an office block described how “the building shook” when the construction lift fell.

He added: “The lift dropped a few flights. We heard screeching and then the crash. It shook the building.”

Two men were inside the external lift, which was outside a tall building covered in scaffolding and formed part of the Unity building, which consists of penthouse apartments.

Companies that dealt with shifting recommendations, angry customers and vulnerable employees earlier in the pandemic find themselves again considering mask mandates. By Lauren Hirsch and…