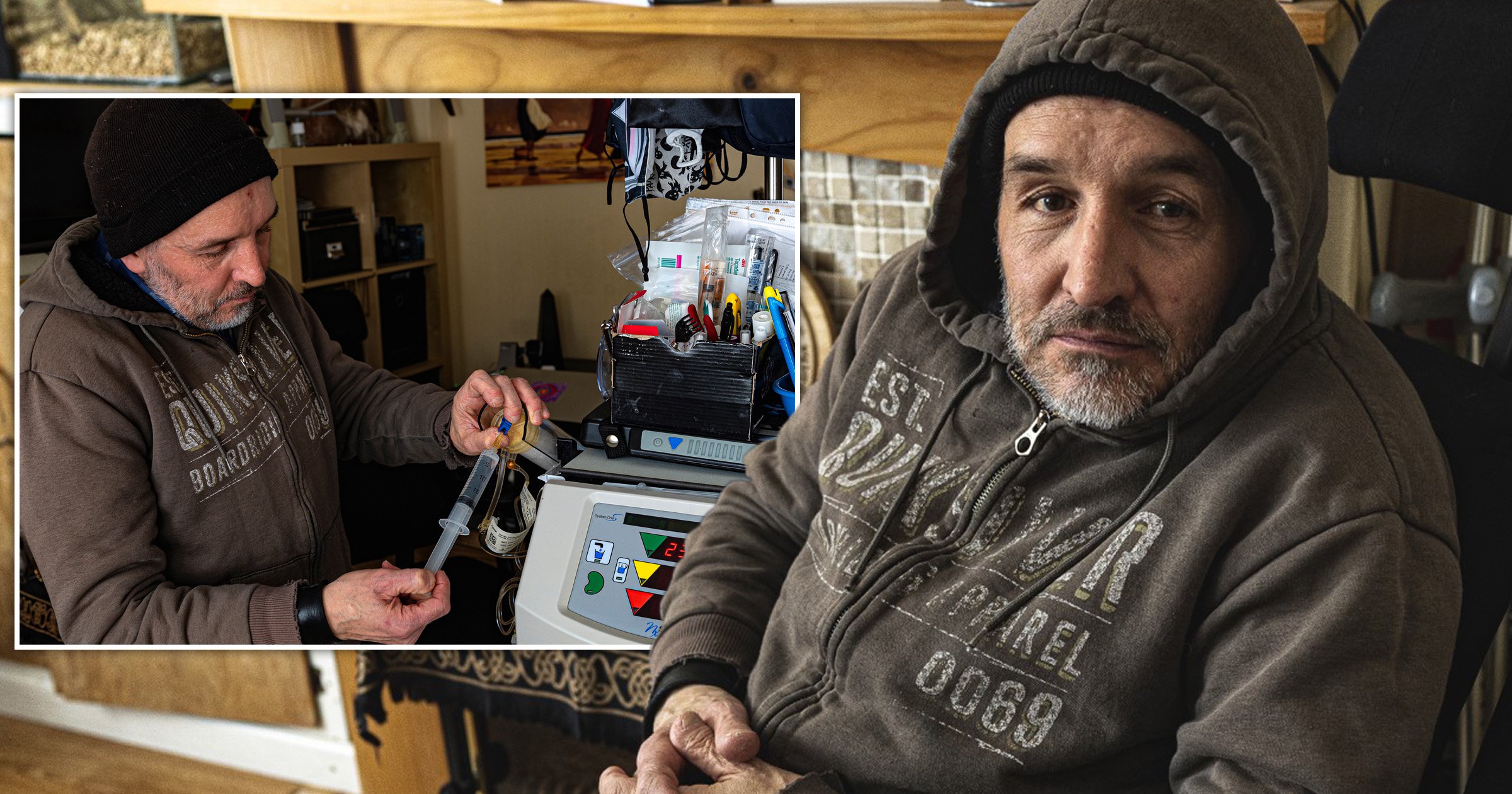 A dad footing soaring household bills including his dialysis costs has said he is ‘shocked’ at Boris Johnson’s ‘hostile’ response after his plight was raised at Prime Minister’s Questions.

Phoenix Halliwell has been forced to effectively switch off his heating as he tries to maintain his life-saving haemodialysis for five nights a week.

The former electrician, 46, needs to use his machine for nine hours of treatment at a time – with the alternative being having to go into hospital.

His case was raised by Sir Keir Starmer at the House of Commons today, with the prime minister asking for details about the ‘sad’ situation.

However, Mr Halliwell, from Coventry, has little faith in the government to help him or thousands of others in a similar predicament amid the escalating cost of living crisis.

He told Metro.co.uk: ‘I found Boris Johnson’s response to be hostile, it almost felt like he was having a personal attack on me, although it’s probably just my perception as he was defending himself at the time.

‘Clearly though, he didn’t like being pushed on it.

‘I was left in a state of shock after watching it. I just feel in general that the government’s response is short-sighted.

‘I agree with what Mr Johnson says about needing a strong economy to get out of the situation we are in but when he’s going on about high-skilled people with high-paid jobs, how’s that going to happen when education budgets are being slashed?

‘Also, a measure of a country is how much it looks after its most vulnerable.

‘The rate at which people pay National Insurance going up is good and the tapering of Universal Credit is good but it’s still a drop in the ocean compared to the rise people are seeing in the cost of living.

‘Many people who are disabled are unable to work, and that’s the bit that’s missing and is most concerning.’

Mr Halliwell and his wife Sam, who have 12-year-old daughter Rosie as their main priority, are trying to cope with the doubling of their gas and electricity bill to £150 a month. Sam has taken on extra shifts in her role as an NHS midwife and they took drastic measures in January to reduce their power bill by half, four months before the latest sharp price rise.

They have also cut back on shopping costs as the price of food soars with inflation hitting a 40-year high. The rate leapt to 9% in the 12 months to April, according to the Office for National Statistics today.

‘We’ve effectively switched off our central heating so it only kicks in on the coldest of nights.’ Mr Halliwell said.

‘We’ve cut back on food shopping and any electrical device that’s not being used gets switched off, even to the point of using a jug to measure the exact amount of water to go into a kettle.’

Mr Halliwell undergoes dialyses between 10pm and 7am and uses an alarm so he knows exactly when the machine has finished a process to make chemicals for the procedure.

He skips meals and uses hats, blankets and a sleeping bag to keep warm. Dialysis overnight means he can take Rosie to school and avoid having to go to hospital, where one session at home equates into three separate visits.

Living with a condition named glomerulonephritis that has affected his kidneys since he was a teenager means he is among 5,000 people who use home dialysis, according to Kidney Care UK.

‘I imagine there are some people who are very scared at the moment because they’ve cut back on everything they can,’ Mr Halliwell said.

‘They’re backed into a corner and they’re thinking, “I can’t do my treatment at home, I’m going to have to go back into hospital”.

‘It puts more strain on the system and that affects all of us. Fortunately, I have the support of Kidney Care UK who are highlighting the plight of people who are reliant on medical equipment within the home.’

Mr Halliwell was personally called by Sir Keir before the Labour leader brought up his case at parliament this afternoon.

Sir Keir said: ‘It’s not just him. Millions of our disabled, elderly and vulnerable neighbours are at the sharp end of this crisis.

‘They simply can’t afford to live with dignity.’

Mr Johnson responded by asking the Opposition leader to send him details of the ‘sad’ case. He then said that the NHS ‘does cover the costs of those who are on dialysis’, although this is said by Kidney Care UK to not be uniform across the country. Where the bill for the procedure is met, the full charge has to be paid upfront and the reimbursement only meets a portion of the amount, according to the charity.

Mr Halliwell currently gets back around a quarter of his electricity charge for dialysis but he fears this will drop by a third if prices soar again in October.

Figures provided by the charity show that home treatment already costs between £590 and £1,450 a year in water and electricity charges.

‘I don’t know what we are going to about October,’ Mr Halliwell said.

‘We will have to wait and see. Our first priority will our daughter but at the moment it feels like we are being priced out of existence.’

Fiona Loud, policy director at Kidney Care UK, said: ‘Sadly, Phoenix’s situation is far from unique. It is heart-breaking that people who rely on medical treatment at home do not receive the full, fair and timely reimbursements they are eligible for.

‘In a situation where all your costs are going up it is no good to have a system which pays back some of the costs, to some of the people, some of the time. Quite simply, this needs to be sorted out now.

‘Nobody should feel like they are being priced out of existence.’

Mr Johnson also used his answer to Sir Keir’s question to tell MPs that the UK has the lowest unemployment rate for 50 years.

He went on to say that government’s agenda in the Queen’s Speech ‘is about putting in the infrastructure, the skills, the technology that will build, continue to build, a platform for growth and jobs in this country’.