The government has been urged to do more to get people to switch from disposable masks to reusable coverings.

And the Green Party wants ministers to push the media to show them less, to stop their use becoming “normalised”.

Disposable masks contain plastics which pollute water and can harm wildlife who eat them or become tangled in them.

The UK government said it was investigating whether personal protective equipment (PPE) could be “reused in safe ways”.

To help prevent the spread of coronavirus, face coverings – disposable or reusable – are now mandatory on public transport, in shops and in some other enclosed spaces in England, Scotland and Northern Ireland.

The rule only applies on public transport in Wales, but it will be extended to shops and other indoor spaces from Monday.

The latest figures for Britain from the Office for National Statistics suggested 96% of adults who had left their homes in the past week had worn a face covering.

The official guidance for England is to wear a reusable, washable one where possible.

It also states that used disposable face coverings – often containing the plastic polypropylene – should be put in “black bag” waste bins “or a litter bin if you’re outside”.

It adds that people should “not put them in a recycling bin as they cannot be recycled through conventional recycling facilities” and “take them home… if there is no litter bin – do not drop them as litter”. 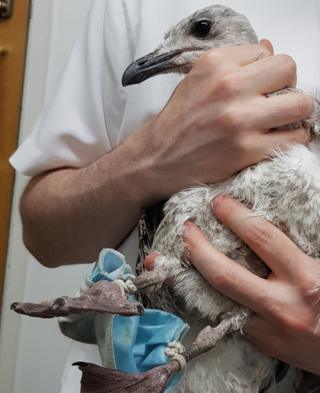 But with the public being told to cover their faces, environmental groups say hundreds of thousands, even millions, of single-use masks are being dumped outdoors, blighting towns and the countryside.

As part of its Great British Beach Clean, running from 18 to 25 September, the Marine Conservation Society is asking volunteers to record how many they pick up.

Laura Foster, the organisation’s head of clean seas, said: “Just look at rivers such as the Thames and you’ll see them floating by.

“When they’re whole, wildlife’s going to get tangled in it or the plastic’s going to be ingested. They aren’t going to biodegrade either, although they will break up, introducing more microplastics into the sea and the food chain.”

The RSPCA is encouraging people with disposable masks to “snip the straps” after use to prevent animals getting caught in them.

The Liberal Democrats are calling on UK ministers to do more to “encourage people to use reusable masks, as well as provide guidance about how best to keep them clean”.

Climate and business spokeswoman Sarah Olney told the BBC: “As we face the Covid-19 crisis, we all want to do our bit to keep others safe. Wearing face coverings is a vital part of that, but it shouldn’t cost the earth.

“It’s clear that single-use face masks are creating an enormous amount of waste. Outside of essential clinical settings, there are plenty of environmentally friendly, reusable alternatives that people can choose to use.”

Amelia Womack, deputy leader of the Green Party of England and Wales, said the surge in disposable mask use came “at a time when we are clearly drowning in plastic”.

She called for “stronger government guidance”, with the public potentially being asked to wear coverings “for years” if the pandemic continues.

The media should be discouraged from showing masks in “normal”, non-clinical, situations, Ms Womack added, also arguing that the government should impose a ban on its own websites, leaflets and films doing so.

A government spokesperson said: “Our priority is rightly to protect public health, but government and the NHS are actively looking at how PPE can be reused in safe ways, including decontamination.”

They added: “We have published guidance on how to wear and make a cloth face covering and how to safely dispose of PPE.

“Over the next couple of months, we are considering how we can inform the UK’s longer-term PPE use strategy into the future, including taking into account environmental concerns.”