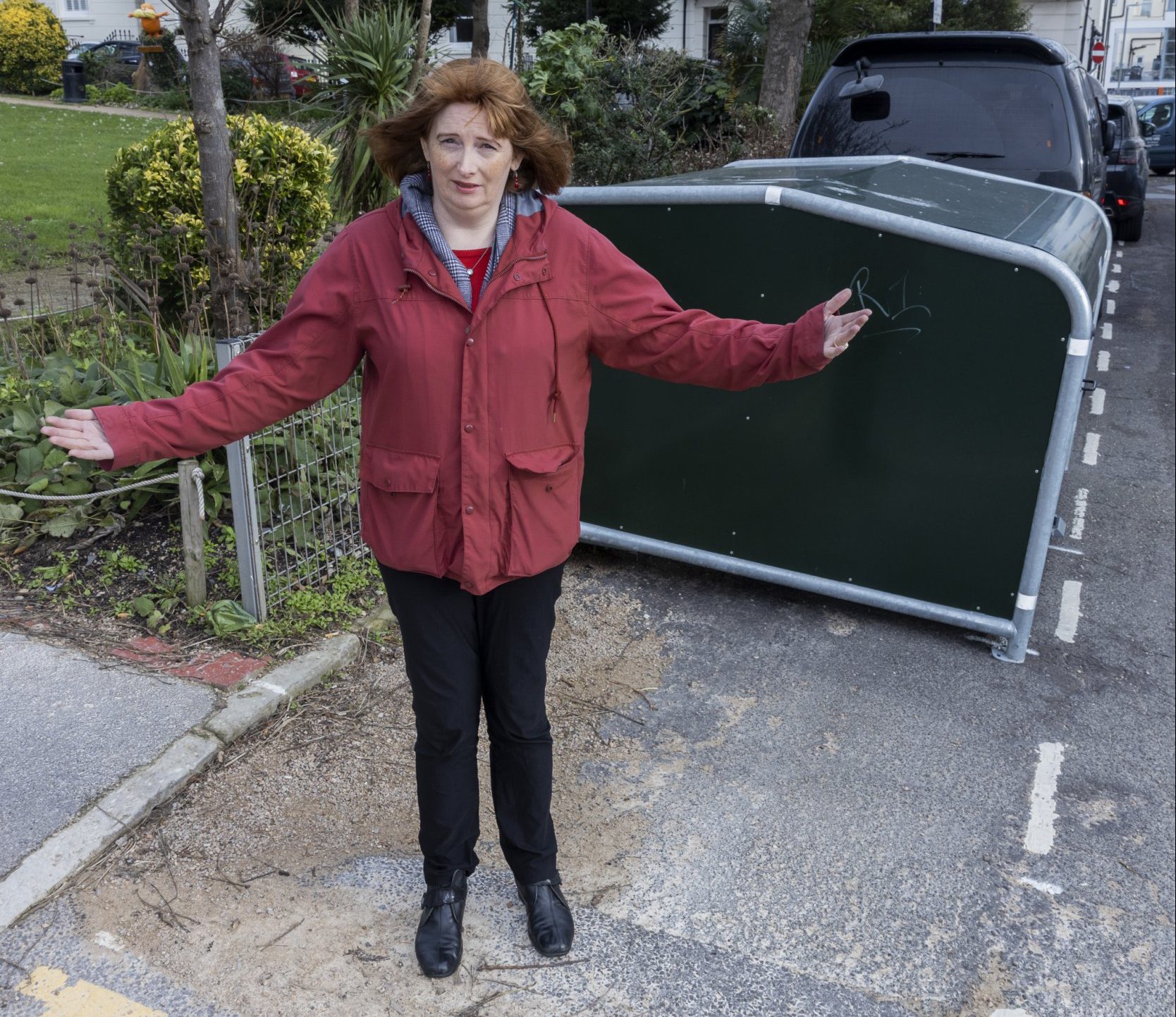 Dozens of spaces have been filled by the council by eco-friendly cycle hangars – which can hold six bikes.

But the £500,000 scheme has left locals, some of whom have paid up to £385 for an on-street parking space, fuming as they claim they can no longer leave their cars outside their homes.

They say the policy impacts elderly or disabled motorists the most, and claim the scheme was pushed through ‘undemocratically’.

Some cycle hangars have even been placed in the middle of two permit spaces, making it impossible to use either spot.

The council has faced controversy for a series of measures which have penalised motorists, including introducing a cycle lane on the seafront road.

Drivers in Brighton and Hove currently pay the council between £60 and £385 a year for a resident parking permit, depending on the vehicle’s emissions.

But with the council renting out cycle spaces at £60 each a year, it means each hangar will generate £360 a year.

Laura King, who lives in Hove, said: ‘This is absolute madness and seems to be another weapon in the Greens’ aim to push ordinary motorists out of the city.

‘These hangars are too large for the parking spaces and infringe on the pavement making them unsafe for pedestrians, especially wheelchair users and the visually impaired.

‘They also have no reflective strips on them to make them visible at night making them dangerous for motorists.

‘Tory councillor Robert Nemeth said: ‘I am hugely concerned about this latest attempt by the Green/Labour Council to push through a controversial policy without the necessary democratic oversight.

‘Bicycle hangers should be shelved until a way of installing them that is not hugely detrimental to the nearest resident can be found.’

Ellie Reid, 34, said: ‘These hangars are madness and a perfect example of yet another pet project by our Green council that doesn’t make any sense.

‘They should concentrate on other green issues like improving our recycling levels as Brighton and Hove has the second worst record in the country.

Brighton and Hove City Council said it has plans to bring in around 150 cycle hangars by next spring, creating a total of 900 spaces for bikes.

Councillor Steve Davis, co-chairman of the environment, transport and sustainability committee, said: ”We know that if we’re to get more people travelling actively and sustainably, we have to give them the right infrastructure.

‘Cycle hangars provide people who live in homes with little or no storage space an opportunity to store their bikes safely and securely.’

A spokesman for the council said: ‘We are aware of concerns relating to the cycle hangar in Norfolk Square and are investigating. We have nothing further to say about this particular issue.’