Actor Rodney Litchfield, known for roles in TV shows including Early Doors, Coronation Street and Phoenix Nights, has died at the age of 81.

Litchfield played the miserable Tommy in the pub-based BBC comedy Early Doors, which aired in 2003 and 2004.

Phil Mealey, who wrote the show with Craig Cash, confirmed the news to the BBC, saying the performer had been in poor health for several years.

“He was a fantastic actor,” and nothing like Tommy, Mealey said.

“He was quite a miserable old bugger in the pub, but he was nothing like that in real life. He was always winding people up and messing around. He was a good old guy.”

Mealey and Cash went through a lengthy audition process and saw some big names for the part of Tommy, but gave it to Litchfield “because he was just so great at that character”, the writer added. 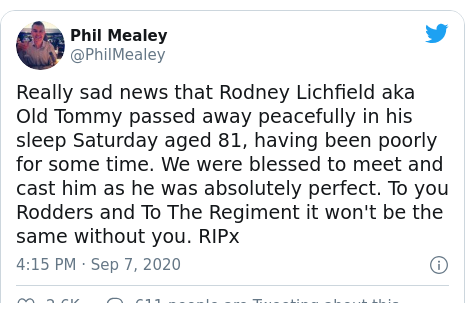 Litchfield, from Wigan, then moved into Coronation Street as Wilf Morton, a former criminal who faked his own death.

His other TV roles included Wild Bill in Phoenix Nights plus credits in Sunshine, My Family, Stay Lucky and Vacuuming Completely Nude in Paradise.

And Michael Starke, who played the son of Litchfield’s character in Coronation Street, described him as a “lovely man and fine actor”.

Litchfield often played cantankerous characters on screen, but once said: “I’m nothing like the man I play in films and on TV.

“But people who see me around Wigan must think I’m a real miserable old chap because that’s the side of me they see on the television.

“In recent years, I’ve played murderers, paedophiles, wife beaters and other terrible characters. I must have that kind of face.”