KABUL, Afghanistan — At least 24 Afghan commandos and five police officers were killed after they were surrounded by the Taliban in northern Afghanistan on Wednesday, according to local and Afghan military officials. It was a profound blow to the elite force at a time when such troops often serve as the only units keeping the insurgents from capturing more territory.

The vicious battle took place in the early morning hours in a key district of Faryab Province. The Taliban seized Dawlat Abad district roughly a week ago — one of the dozens that have fallen since American and international forces began withdrawing from the country last month.

“When the Taliban came to Dawlat Abad, they surrounded the commandos and killed them in less than an hour,” said Mohammad Hakim, a militia commander who escaped the district.

On Thursday alone, the neighboring district of Shirin Tagab fell after Afghan forces there fought for days and ran out of ammunition, said Sebghatullah Selab, the deputy head of the provincial council in Faryab. Mohammad Nader Sayedi, another member of the provincial council, said that several hundred security forces either were captured or surrendered and the Taliban seized more than 100 vehicles and hundreds of weapons.

In the country’s south, the Taliban entered Gereshk, an important town near Helmand Province’s capital despite concerted airstrikes. And in Zabul, tribal elders negotiated the withdrawal of Afghan troops from a base in Shinkay, a district that fell to the Taliban earlier this month. 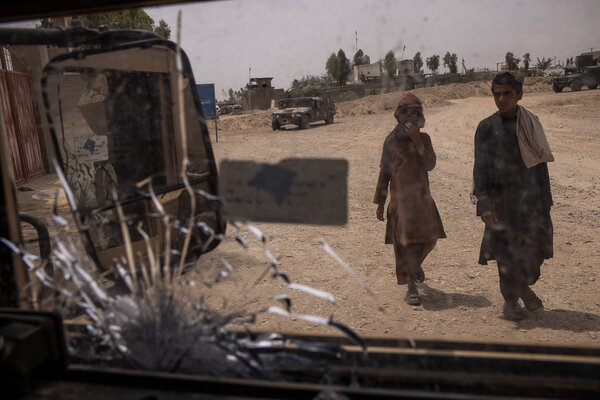 The tapestry of government defeats and territorial loss has only emboldened the Taliban and called into question Afghanistan’s fate as the United States nears the end of its military involvement in the country after 20 years. U.S. and international forces, slated to be out of the country by Sept. 11, have accelerated their withdrawal and will likely depart next month.

Now, without any guarantee of U.S. air support after international forces pull out and with a shrinking number of American aircraft overhead, Afghan commanders are being forced to make increasingly difficult decisions about which bases and outposts to hold or abandon, leaving the civilian population at the hands of the Taliban.

Wednesday’s battle came after a commando force of roughly 50 troops, intermixed with police officers and soldiers, carried out an operation to retake Dawlat Abad district from the Taliban with little coordination with nearby government forces, said an Afghan military official with knowledge of the operation, who was not permitted to speak to the media, quickly routing a contingent of Taliban fighters there.

But several hours later, a much larger Taliban force attacked the elite force from all sides, killing at least 24 commandos and five police officers. Several troops are wounded and missing, the military official said, and despite calls for air support, no aircraft were able to respond in time.

Among the scattered dead was Maj. Sohrab Azimi, a well-known and beloved officer whose job was directing airstrikes, one of the few advantages the Afghan security forces hold over the Taliban.

In the seemingly endless cycle of killing and dying in Afghanistan’s war, the death of Major Azimi, 30, the son of a well-known Afghan general, highlighted the brutal and personal nature of this new chapter of the war.

Major Azimi “was the best,” one of his fellow Afghan comrades observed, who spent the hours after his friend’s death in the north directing airstrikes in the south to defend the district of Gereshk. “I can’t tolerate any more my friends’ deaths.”

Often the seemingly countless number of Afghan security force casualties spread across the country are faceless to many, especially those ensconced in Afghanistan’s more urban and affluent cities. Frequently they are recruited from rural areas in search of job and financial security then returned and buried after their deaths. More than 60,000 Afghan troops and police have been killed since 2001.

But Major Azimi was a human face to the military for the country’s upper echelons — himself a polished officer who had received part of his education in the United States.

For another part of the Afghan population in the countryside, though, Major Azimi's command was the face of terror: the low whine of military aircraft, armed with machine guns, rockets and bombs, all tethered to his radio, capable of destroying property, insurgents and sometimes, accidentally, civilians.

The Afghan government’s air and commando forces are arguably the two pillars of the Afghan security forces keeping the Taliban outside of major cities, leaving soldiers like Major Azimi — a confluence of both — one of their most valued targets.

But Afghan commando forces are being stretched to the breaking point, shuttled between hot spots and dropped in to push Taliban fighters out of important areas. Their night vision, camaraderie and training alongside some of the West’s best military units means they are well matched against their insurgent adversaries.

“We mourn. The Taliban celebrate. And it hurts too much,” said Ferdous Samim, one of the major’s best friends, his voice exhausted.