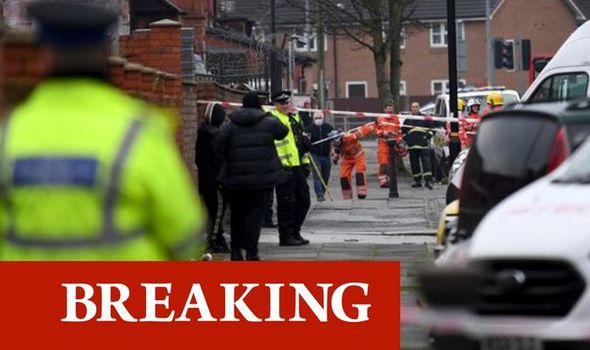 Fire crews and police officers have rushed to the scene on Shrewsbury Street in Old Trafford. The fire service confirmed the roof of an unused church has partially collapsed. A number of residents have been evacuated as a “precautionary measure”. A cordon has been placed around the area, while Shrewsbury Street has been shut between Upper Chorlton Road and Ayres Road.

Greater Manchester Fire and Rescue Service said they received reports eary this morning a “building roof had collapsed”, on Shrewsbury Street in Stretford.

A spokesperson for the fire service said in a statement: “At around 6.45am this morning (14 January), we received reports that a building roof had collapsed on Shrewsbury Street, Stretford.

“Four fire engines from Moss Side, Salford, Stretford and Wythenshawe fire stations and a technical rescue unit and special response vehicle from Ashton-under-Lyne quickly attended the scene, which involved the partial collapse of an unused church.

“Some nearby residents have been evacuated as a precautionary measure.

“A cordon is in place and crews remain on the scene.”

Transport for Greater Manchester said due to an “unstable building”, part of Shrewsbury Street has been closed.

There are expected delays on nearby Chorlton Road, with motorists advised to use alternative routes.

The service wrote in a tweet: “Due to an unstable building, Shrewsbury Street in Old Trafford is closed between the junctions with Upper Chorlton Rd and Ayres Rd.

“Please use alternative routes if travelling in the area. #TfGMTraffic for further updates.”

Trafford Council said in a statement: “We are currently at the site supporting residents to make sure they are safe and have somewhere to go to.

“We are also assisting the Fire Service at the scene.”