BERNALILLO, N.M. — On Nov. 4, the morning after the election, hope and uncertainty mingled in the air outside the adobe house of the photographer and filmmaker Danny Lyon. Wind ruffled the branches of the golden cottonwoods he planted when he built the place in the early 1970s; it was sunny out. “I’m an eternal optimist,” he said. Mr. Lyon wore a Stetson hat, a blue button-down shirt, a face mask; green suspenders hitched up his jeans. In some parts of the country he has occasionally been mistaken for his University of Chicago classmate Bernie Sanders, for whom he stumped in 2019. “I just wave back at everybody,” he said.

The previous night, Mr. Lyon and his wife, the artist Nancy Lyon, had parked in front of the television to watch the returns. Mr. Lyon is 78, born in Forest Hills, Queens, to a German Jewish doctor and a Russian Jewish mother who nurtured his early interest in the Russian and Spanish revolutions. Until relatively recently, he said, “I never cared much for elections one way or another. Because I was so young when I was in the civil rights movement, I always believed democracy happened in the streets. Part of that has never left me.”

That indefatigable belief buoys three releases of Mr. Lyon’s own very American films, photographs, and writing — work that, since his first landmark photography books in a blazingly prolific decade, has elevated social documentary to an art form. He has always spoken from the streets, whether through incarcerated people, outlaw motorcyclists, freedom fighters, or the very buildings themselves. Aperture has just reissued “The Destruction of Lower Manhattan,” Mr. Lyon’s reverent 1969 document of the historical structures that would be demolished to make way for the World Trade Center. 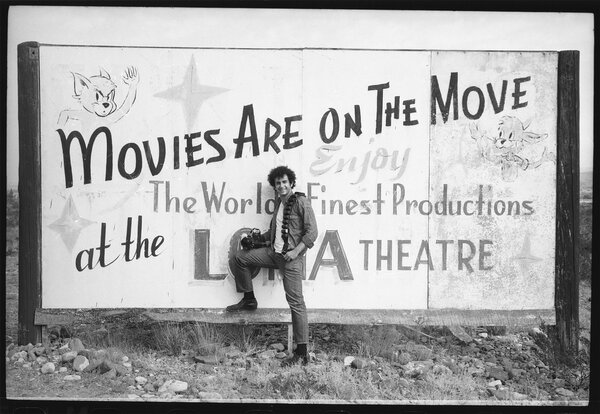 “American Blood," edited by Randy Kennedy for Karma Books, collects six decades of Mr. Lyon’s sharp-witted and sanguine essays, interviews and photographs, starting with his days as the staff photographer of the Student Nonviolent Coordinating Committee, or S.N.C.C., when he packed both an Olivetti typewriter and a camera.

But it is the fate of Mr. Lyon’s third new project, the one closest to his heart, that remains as uncertain as that of a divided country in the grips of a pandemic: the 75-minute film “SNCC” (pronounced “snick”), about the early days of the youth-led direct action civil rights organization that was known among its members simply as “the movement.” It “broke the back of Jim Crow,” he said, before its eventual unraveling.

The film also centers on Mr. Lyon’s six-decade friendship with Representative John Lewis, whom he met when he hitchhiked from Chicago to Cairo, Ill., in 1962, when he was 20 and Mr. Lewis 22.

He finished editing the film in record time — “I haven’t left this chair since March,” he said as he walked into his studio. One wall remained analog, with a photomontage in progress. The rest he had turned into an editing room, with three computer monitors and stacks of hard drives. He is intent on finding a distributor to get the film’s message into the hands of a new generation of activists.

For Mr. Lyon, whose half-century-old work about mass incarceration and racial injustice is presciently relevant, a film about the past is urgent: His ideal audience is young people addressing the climate crisis. “It’s the elephant in the room,” he said. “I cannot believe what’s happened to the earth and how culpable our quote ‘leaders’ are on both sides. I wanted to show how a small group of people could be so effective at changing the course of history, which is what S.N.C.C. did.”

The Whitney Museum of American Art, which premiered the first comprehensive retrospective of Mr. Lyon’s photographs and films in 2016, hosted a virtual screening of the film in October. Pharrell Williams has signed on as executive producer. Thus far, however, “SNCC” has been turned down by both Netflix and Hulu. “I was told the way it was made was ‘not traditional,’” Mr. Lyon said. “That’s a compliment, actually.”

Though disappointed that “SNCC” has not seen a major release, he is determined to find other avenues. “I’m psyched to enter it in festivals,” he said.

“SNCC” is the most ambitious and documentary of Mr. Lyon’s films — but like his others, most of which are free to watch via his Vimeo page — it is also personal. The poetic and idiosyncratic influence of Robert Frank, with whom Mr. Lyon shared his first film camera, is evident. Mr. Lyon calls “SNCC” a “compilation film,” collaged from his own photographs, notably many that have never been published, as well as new interviews with fellow activists, shot on hand-held camera, and vintage recordings, including the organization’s leader James Forman’s stirring and resonant speeches.

Some of Mr. Lyons’s S.N.C.C. pictures circulated again widely after Lewis’s death in July and have had echoes in contemporary images of police brutality. (Most recently, posters made from those images emerged as hot collectibles on an episode of “Antiques Road Show.”)

“The nature of my work is to make a great work of art, which means if you get one frame on a roll of film, you’re happy,” Mr. Lyon said. “One.”

Those that didn’t appear in books went unknown for decades. When Mr. Lyon finally had scans made, he said, he was fascinated by the tiny details that emerged — “how the kids put a SNCC pin in their hair,” memories of mass meetings in a church strung with microphones “like at Carnegie Hall” to record Bettie Mae Fikes leading the Freedom Singers in “This Little Light of Mine.” “They’re raw material made in the middle of the struggle and they’re untouched by time.”

Image after image flashes by, luminous and unpolished, showing startlingly young activists clasping hands, rejoicing, grieving, resisting, believing. Watching and listening now, it is impossible not to feel newly transported to those rooms and streets.

“Lyon’s photographs are going to be looked at by historians for as long as people are interested in looking at the history of democracy in America,” said the critic John Edwin Mason, who teaches the history of photography at the University of Virginia. “I’m pretty excited to know there are many more that have been unseen that focus on the ordinary people who were part of that movement.”

Recently, Mr. Lyon discovered a boarding pass from his last trip to see Lewis. “I think it was January 21,” he said — before the pandemic broke out, before the murder of George Floyd spurred international protests. Lewis, who always wore suits, especially as a young demonstrator, is uncharacteristically dressed down in an undershirt, with a recent diagnosis of Stage 4 pancreatic cancer. Still, interviewed in bed under quilts, the congressman’s manner remains gentle, thoughtful, dignified.

That scene echoes another intimate moment, shot in a hotel room in Denver during the 2008 Democratic National Convention. In that clip Lewis had described a dream — a nightmare — of falling. In that moment the great civil rights hero is revealed as human.

In Mr. Lyon’s last in-person visit with Lewis, the human becomes oracle. Candid and reflective, as he vividly recalls his long-ago youth in Alabama, Lewis also speaks to the future. “They’re on their way. Another group is on the way.”

That group “on the way” is what drives Mr. Lyon’s push to get the film seen. “So I’m saying S.N.C.C. is the model for climate activists,” he said. “It’s the whole way they worked. They targeted impossible areas. They said if we can do this in Mississippi — which would cost them their lives — we will change all of America. And they were right.”

If ”SNCC” is the work of the eternal optimist, “The Destruction of Lower Manhattan” is the lament of the historian. In a beautiful new printing, the book is a window onto a double-disappeared life: the paintings and layers of patterned curtains still hanging in an abandoned apartment in a World Trade Center site that would undergo its own destruction, for instance.

Just as he was a participant, New Journalism style, on the streets of Albany, Georgia and Clarksdale, Miss., Mr. Lyon is spiritually allied with the demolition men he photographs as they prep the sites for eradication; like him, they are the last witnesses to these vanishing places.

“What the hell does John Lewis have to do with architecture?” he asked, self-effacingly, half-jokingly, questioning the connections between his works as he wandered the yard behind his house. His own collections answered back. Wooden tables lined the patio, covered with rocks and fossils the Lyons have foraged, some dating back to the dinosaurs. Inside more than half of his library is devoted to volumes of history. Mr. Lyon is a student of the long-ago past, an empathetic participant-observer, and a restless soul who’s ready to tear the broken parts down.

The near-simultaneous arrival of these projects may appear coincidental, but aptly speaks to his persistent productivity, and to the serendipity of a life that has intersected with some of the major figures of the 20th century. What other artist has shared apartments with both John Lewis and Robert Frank? For that matter, what other artist has gone skiing with Robert Frank? (Mr. Lyon, a first-timer, left the slopes in a wheelchair.) What other photographer can rightfully attest that their ophthalmologist father, a talented amateur photographer, was the eye surgeon of Alfred Stieglitz? Within the same year, Mr. Lyon met Sanders, Lewis, and Mark di Suvero, to whom he dedicated “The Destruction of Lower Manhattan.”

Days later, after the race was called for Joseph R. Biden Jr., Mr. Lyon did leave his chair. He and Nancy drove to Albuquerque, where Mr. Lyon photographed overjoyed strangers, posting them afterward on Instagram.

Last week, in a speech at the “Biden, Be Brave” rally urging the president-elect to uphold the tenets of the Green New Deal, Representative Alexandria Ocasio-Cortez repeatedly referred to her fellow climate activists as part of “the movement” — an echo of S.N.C.C. speak.

And when one of Mr. Lyon’s photographs of a youthful Lewis, speaking at a rally in 1963, was recreated as a 3,000-square-foot painting on a building in Rochester, N.Y., by Darius Dennis and other artists, it delivered a welcome shot of optimism.

“This spontaneous reappearance of my work after 58 years is one of the most rewarding things I have experienced,” Mr. Lyon wrote in an email. For a moment, it did look as though democracy had returned to the streets.