Activists from Extinction Rebellion, including two British Olympians, have blockaded and broken into an oil refinery in Hampshire, the group has said.

Extinction Rebellion used their pink boat – the Beverly Geronimo – to blockade the main entrance to the Fawley ExxonMobil refinery, while other protesters cut through the site’s electric fence and climbed two 50ft oil silos, the group said in a statement.

The protesters, who include Olympic sailor Laura Baldwin and gold medal-winning canoeist Etienne Stott, are demanding the government stops all fossil fuel investments and are also calling for ExxonMobil to stop its expansion plans for the Fawley refinery. 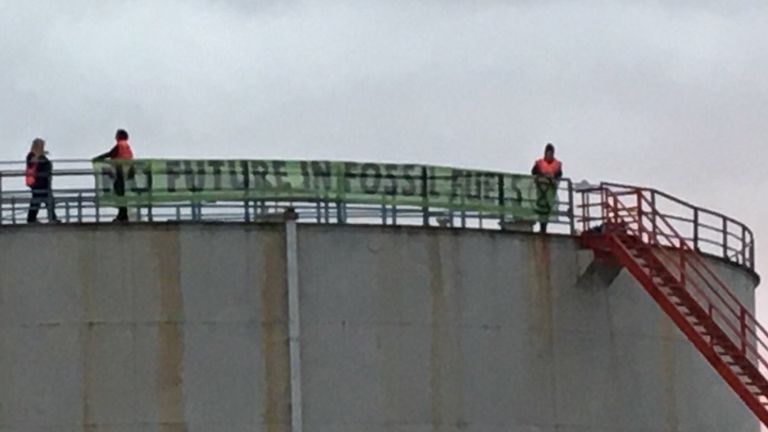 ExxonMobil is a subsidiary of oil giant Esso and its Fawley site is the largest in the UK, supplying 20% of UK fossil fuels, according to XR.

Extinction Rebellion said 15 activists had gained access to the site early this morning and had “locked on” to structures.

Seven of them has climbed the silos and unfurled two banners, one saying “climate emergency” and the other “no future in fossil fuels”.

The two Olympians are chained to the boat, with Ms Baldwin saying she is a “deeply protective mother, moved to direct action in a desperate bid to force this suicidal system to change”.

“Watching the news this summer was horrifying and heartbreaking, witnessing catastrophic climate impacts killing people on every continent of the globe,” she added. Mr Scott said: “I think it’s totally wrong that oil companies continue to put their profits ahead of everyone’s right to a future on a living planet.”

The protests come three days ahead of the COP26 UN climate conference in Glasgow, where members of XR offshoot group Ocean Rebellion staged another protest yesterday. 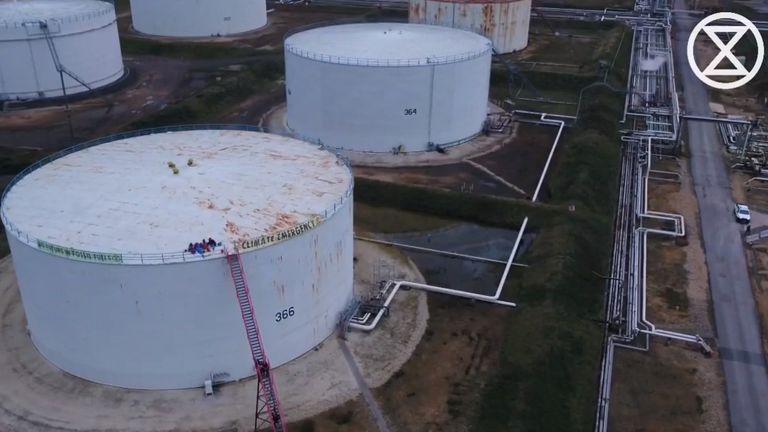 A campaigner dressed as Prime Minister Boris Johnson set fire to a prop boat with the words ‘your children’s future’ written on it outside the conference venue on Wednesday.

OR members, including an ‘oilhead’ character with a petrol can mask, also burned stacks of fake money during the protest on the banks of the River Clyde.

Police announced today they have charged four Animal Rebellion activists – a separate offshoot of XR – with aggravated trespass after they scaled the Department for Environment, Food and Rural Affairs building in London on Tuesday.

Orla Coghlan, 26, Jamie Ozden, 25, of Tottenham, north London, were bailed to appear at Westminster Magistrates Court on 15 November, alongside Liam Bright, 28, of Sherborne, Dorset, and Annabel Berwick, 19, of Cambridge.