The director Nancy Meyers explains how a sort-of sequel was born amid worry and a desire to help. George Banks would approve. 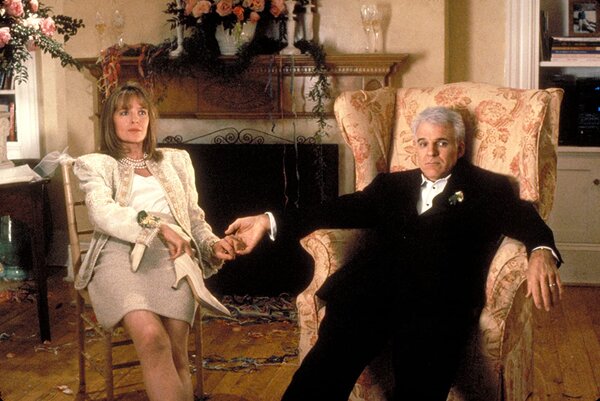 The short “Father of the Bride Part 3 (ish)” was set to be posted Friday on YouTube as a fund-raiser for World Central Kitchen.

LOS ANGELES — I thought I was retired. After 40 years of making movies, I felt done. I was planning to travel more, start reading more. I wanted to buy a hammock. You know, all the regular stuff retired people want to do. Then Covid-19 came to America.

When I heard it had reached Seattle, I feared life was about to change. That’s when I started buying medical supplies, cans of beans, boxes of pasta and jars of almond butter.

It was on March 8 that I thought I had better get that pneumonia shot my doctor had been telling me to get for the past five years. I asked the pharmacist if she’d meet me in the parking lot so I didn’t have to go inside and potentially be near sick people. She kindly came out with the shot on a tray. She wasn’t wearing a mask. But I was. Two of them. I held my breath, got the shot and drove home. I haven’t ventured out much since.

My children say I’m a person who needs a project. Unable to see friends and staying socially distant from my kids and grandkids, I made my home my project. I became a dedicated house cleaner. In May, after two months of mopping, wiping, washing, disinfecting and endlessly buying new cleaning tools on Amazon, I knew I couldn’t go on like this. I needed an escape. I needed to go back to work.

I recognized how lucky I was to be able to stay home while others couldn’t. On the news, there were families waiting in line for food in 2020 America. It was heartbreaking. What could I do? What can I do? I wondered. That’s when I emailed Steve Martin and asked him if he had time to chat. He wrote back, “I have nothing but time.”

I told Steve I had an idea to write a short Part 3 to “Father of the Bride,” a movie my former partner, Charles Shyer, and I had made with Steve nearly 30 years ago (followed by a sequel, “Father of the Bride Part II”). Steve played the title role of a father who resisted letting go of his daughter and misplaced all of those difficult emotions into fighting the cost and hullabaloo that goes into making a wedding. At least, that’s how I always saw it. I told Steve I thought his character, George Banks, a self-admitted overreactor, was ripe to revisit during the pandemic. I explained I’d like to make the film as a fund-raiser for World Central Kitchen to help those who were struggling.

I said all the actors would shoot from home, and I would direct from my computer and we’d get it online somehow. At the time, I wasn’t sure how to do any of that, but I asked Steve if I could figure it out, would he do it? Without hesitation he said yes. So did Martin Short, Diane Keaton and the rest of the cast.

I hadn’t written the “Father of the Bride” characters in decades. I was a little nervous. I watched both movies, made some notes and got that excited feeling in my stomach that I hadn’t felt in a long time.

It was fun and comforting to think about the Banks family and where they might be today. George and his wife, Nina (Keaton), would now be in their 70s. I wondered what they were like 50 years into their marriage. Did they still live in the big white house? And how did their son, Matty (Kieran Culkin), turn out? We last saw him at 12 years old. Then I thought about “Father of the Bride Part II” and the two babies born on the same day — one to George and Nina and the other to their daughter, Annie (Kimberly Williams-Paisley), and her husband (George Newbern). When I realized those babies would now be 25, I thought I must’ve done the math wrong. It felt like when you see friends’ kids you haven’t seen in a while, and you can’t believe they’re grown-ups. I couldn’t wait to get started.

Thinking about how George Banks might respond to sheltering at home kept me up at night. I was no longer awake at 4 a.m. because the news was so frightening, but because I was thinking of all the “what-ifs” I could write into this screenplay. The pandemic brought me back to being a writer.

I started to feel grateful, then a bit guilty about feeling that. The work was giving me a sense of calm and purpose. As long as I was in the Bankses’ world, I wasn’t in this one — even though the story was set in August 2020. When we shoot nighttime interior scenes, we call that kind of lighting “movie night” because you can still see faces in the dark. I was writing the pandemic like that. Not quite as dark.

I gave all of my worries and concerns about the pandemic to Steve’s character, and by channeling myself into his naturally over-the-top personality I could finally laugh at some of what I was putting myself through. I mean, I was using up 50 pairs of disposable gloves a month, and I never left my house. I was forwarding so many emails about the virus to my kids that they finally stopped answering me. I decided this was how I was going to write George Banks. There would be a bigger piece of me in him this time.

Another part of my life made its way into the plot when my daughter’s July wedding was postponed. Matty would be 37, and just the right age to be engaged and have his wedding canceled. I had my third act.

Now I had to figure out how to make a short movie without any of us leaving home. In the summer, I put together a small crew and stepped into the world of remote filmmaking. 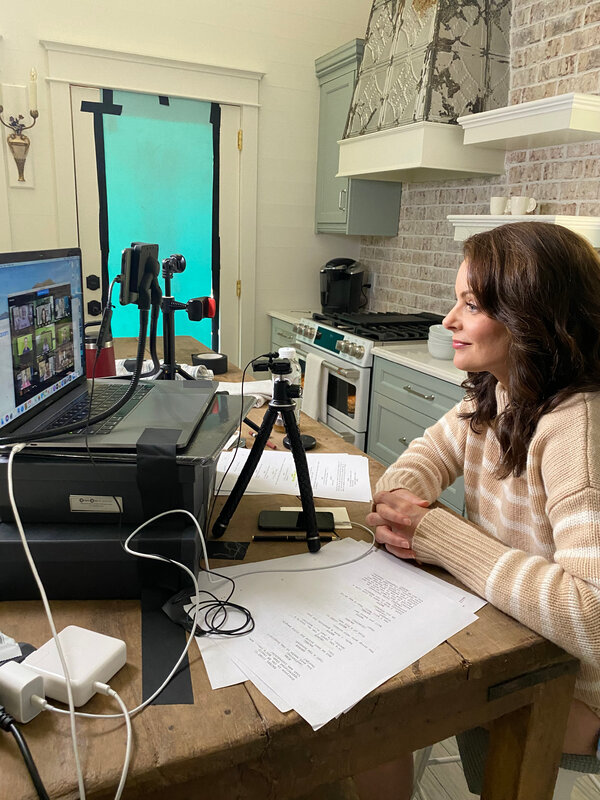 There was Zoom location scouting with all the actors showing us around their homes. The rooms needed to fit their characters but also had to be suitable for shooting. When one of the actors didn’t have a space that worked, we sent them green screens and found appropriate backgrounds to put in later. Kieran, for example, lives in New York, but his character is supposed to live in Los Angeles, so we gave him a green screen and used a photo of my daughter’s dining room as his background.

The actors and I figured out their costumes mostly from their own closets. Steve and I thought he should be in sweats. I went online and sent Steve a dozen different sweatshirts, which he tried on for me over FaceTime. None seemed exactly right. Then Steve showed me an old one of his, and it was very George Banks. Steve later told me, “When you asked me to do this I thought, this will be a pleasant two hours. Then we shot for four days and tried on sweatshirts for six days.”

Our producer sent a box of equipment to each actor (lights, a mic and an iPhone). With help from husbands, wives, significant others and kids, our sets were lit and we were ready for the July shoot. It all felt a bit like those old films where everyone in town helps put on a show, except these were movie stars, and I could not have been more grateful for their efforts.

The actors recorded themselves while I watched their slightly blurry iPhone images via Zoom. They couldn’t easily see one another, but they could hear each other. At one point, there were 10 blurry actors on my computer screen. I couldn’t tell if a hair was out of place or if someone had tears in her eyes, so I did enough takes to cover all of the “just in cases.”

It was challenging to say the least, but it was a fun challenge. I think the actors would agree. We had none of the usual crew or tools at our disposal. No one was there to touch up their makeup, fix their hair, move a light, adjust their mic or straighten their wardrobe. We had no monitor to play anything back to see how something worked.

Even editing was a unique experience. We had the same amount of footage as on a small film. After all, there were 10 cameras rolling for almost four days. My film editor worked in his home and shared his screen with me in mine.

As I think about it, this unusual process reduced filmmaking to what it ultimately comes down to: performance and telling our story.

Even though we were never in the same room or even the same time zone, the camaraderie was still there. When it was over, it felt like all movies feel when shooting ends — a little sad.

For me, I guess I always do need a project. This one, with its positive themes and love of family, made me feel whole at a time when I needed it most. And if our efforts lead to a little relief for someone else, then it was a summer well spent.