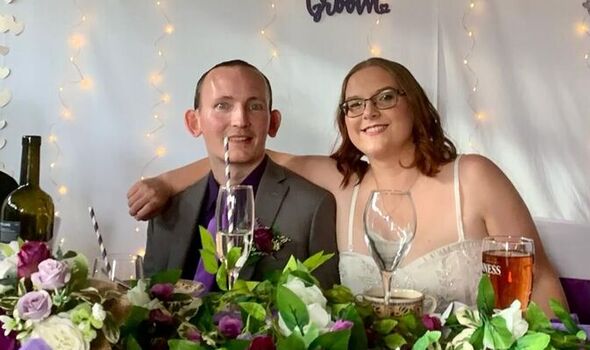 A couple who met on Channel 4 show First Dates have married after the husband was given devastating news that he has just five years to live.

Mike Sumner, 38, wed Zoe Welch, 31, in a relative’s garden in September, a ceremony planned in just three months as Mike had been told motor neurone disease meant his health had deteriorated.

Mike, a former driving instructor, arrived at he service in a DeLorean car, from his favourite film Back to the Future, and Zoe downed a pint of squash – recreating the stand-out moment from their televised first date.

Speaking from his home in Sheffield, South Yorkshire, Mike said: “It was surreal seeing Zoe walk down the aisle in her dress. She looked amazing and I got emotional at the ceremony. It was fun turning up in the DeLorean car and seeing the guests’ reactions.”

Recalling their March 2020 Channel 4 appearance, Mike said: “I arrived first and was taken to speak to the barman, Merlin. He was fun, we chatted about the future, the 80s and electric cars and I explained why I can’t drink strong beer as it doesn’t agree with me. I only spoke to Fred for a minute or two, he was very suave and smooth.

“I thought she was fun and really easy to talk to. I’m so glad we went on First Dates.”

Zoe, who is a people manager at a bank, said: “It was surreal when I walked into the restaurant I was like ‘oh there’s Fred, there’s Merlin’. I only spoke to Fred for a minute but he was just as nice as he is on TV.

“I was jealous Mike got to spend more time with Merlin, I spoke to him when I ordered a pint. There were little cameras dotted around everywhere but you soon forget they’re there.

“There wasn’t an instant spark between us but I thought ‘let’s get to know each other and see where it goes’. I did notice his bright blue eyes.”

Mike was diagnosed with motor neurone disease in November 2020, around eight months after he met Zoe.

“I was crushed,” Mike said.

“I really cared for Mike and knew I would support him through it all.”

Zoe supported Mike through the struggle and the couple soon moved in together in Sheffield.

But Mike’s health has worsened since, to the point now that he now needs a wheelchair.

He proposed to Zoe earlier this year, while on holiday in Florida, USA.

“We don’t know how much time we have so we wanted to do it sooner rather than later,” Zoe said.

“We only decided in July that we would get married in September, so it’s been a rush to arrange it all.”

“We decided on a purple theme as we both like the colour and love Dairy Milk. All the table decorations and cake were purple, and Mike’s tie was purple and the skirt of my dress.”

Twenty guests attended the ceremony, held one month after a legal ceremony at a registry office in August 2022.

Zoe said: “The readings at the ceremony were lovely and I did the speech as the best man didn’t want to. We had Barnaby with us at the ceremony – he’s the bear Mike had bought me to remind me of him when we were long distance.

“Rather than having a child we have a cuddly bear. We had beautiful blue skies it was amazing.”

The newlyweds are now set to have a mini-moon in York and hope to go to Italy next year for their honeymoon.

“We’d love to have a bigger party with more guests to celebrate soon too,” Zoe said.

“It was an amazing day.”