A Roman Catholic priest has been killed in a small town in western France, in what the country’s interior minister called a “dramatic assassination”.

The body of Father Olivier Maire, 60, was found in the village of Saint-Laurent-sur-Sevre.

French media reported the suspect handed himself in to police on Monday and admitted to the killing.

The 40-year-old had been under judicial control for allegedly setting fire to the 15th-century Nantes cathedral in July 2020. The blaze destroyed the organ and shattered stained glass windows. 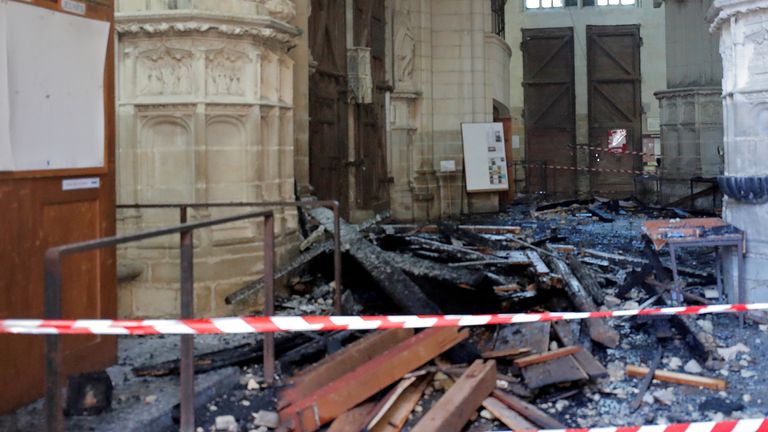 The head of the religious community of Montfort, Santino Brambilla, confirmed the priest had housed the suspect for several months.

“This is a human drama, but the suffering is great,” Brambilla he told BMFTV.

The suspect – a church volunteer from Rwanda – had been seeking political asylum when he allegedly set three fires in the cathedral last year. He had been tasked with locking up the building at the time of the incident.

Following the blaze, the suspect was held in detention until May 2021 when he was then released under judicial supervision and placed in the abbey, prosecutor Yannick Le Goater said.

After talking about wanting to leave, he was transferred to a psychiatric hospital where he stayed until the end of July.

France’s immigration authorities had handed the Rwandan national an expulsion order in 2019, but he remained in the country as he awaited trial.

Interior minister Gerald Darmanin confirmed the killing and said he was heading to the Vendee region following the “dramatic assassination”.

The man did not have a terrorist motive, the regional deputy prosecutor said.

Yannick Le Goater confirmed the suspect has been arrested and remains in custody.

Local worshippers described a priest much loved by his parishioners.

“I’m in shock. I cannot believe it to be,” Sister Dorothee Harushinana, who attended a mass the priest had led on Sunday.

“He was someone close to the people. You could always call on him.”