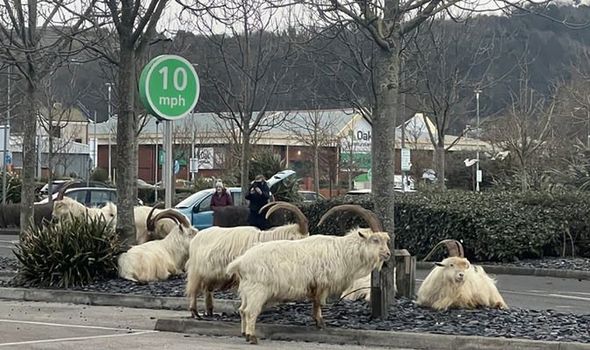 The herd of around a dozen large goats watched as two angry bucks locked horns at the traffic lights near Asda in Llandudno, north Wales, stopping cars entering or leaving the shop’s car park. Despite drivers beeping their horns, the Great Orme goats were too busy scrapping or watching the fight to move.

Michelle Evans was driving to the supermarket when she had to pull up and wait for the animals to move on.

The nurse told North Wales Live: “There were two goats fighting at the traffic lights by Asda.

“They were having a right scrap and making a heck of a noise. It sounded like one was hurt. But they wouldn’t give up.

“They were really going at it.”

They were having a right scrap and making a heck of a noise. It sounded like one was hurt

Goats butt heads to establish their dominance or their place in the herd.

Michelle, who is a mum, added: “The two goats fighting had their horns locked while the rest of the herd was just watching.

“People were beeping their horns because they couldn’t get in or out of Asda. In the end, people just drove around them. You don’t expect to see that when you go to pick up your shopping.”

“There were about ten goats stopping cars getting in and out of the car park. The drivers were getting frustrated,” Claire said.

The matter was reported to Conwy County Council.

A spokeswoman for the authority said: “The council acts in the interests of the goats’ welfare when they are on our land.

“We are not responsible for any damage they may cause, and we cannot become involved in removing goats from private property.”

The Kashmiri goats were originally a gift to Lord Mostyn from Queen Victoria and have roamed in a wild state for about 100 years.

Although once in the ownership of Lord Mostyn, they are now regarded as wild animals, and no one is legally responsible for them.