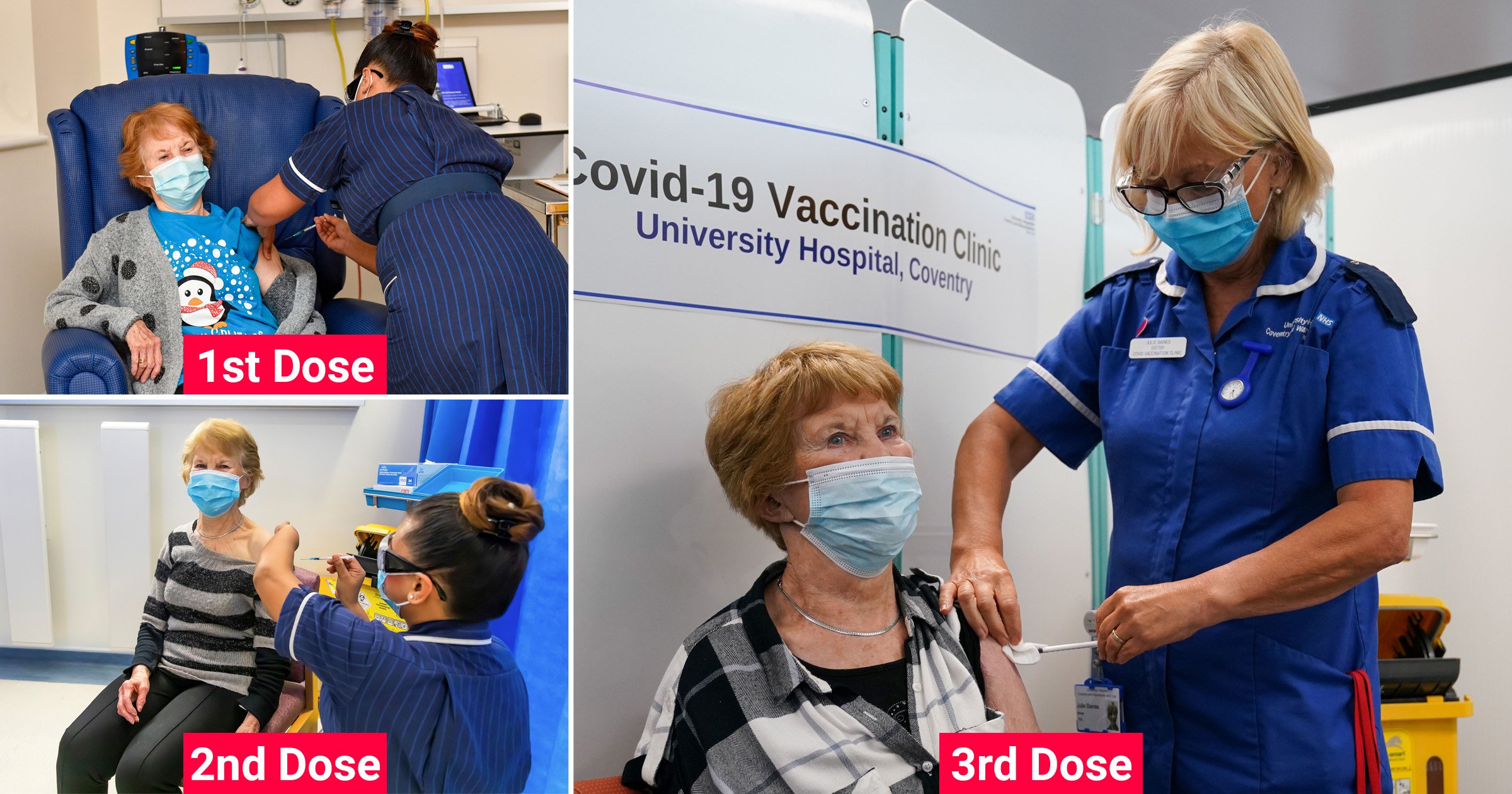 A gran who became the world’s first person to have a Covid-19 vaccine outside of trials has urged people to have their booster jab after receiving hers.

Margaret Keenan, 91, returned to University Hospital Coventry, in the West Midlands, where she had the historic injection in December 2020.

After getting her booster today, she told reporters ‘I feel great’ and urged eligible members of the public to ‘go for it’.

It comes as the NHS revealed more than 350,000 people have booked a booster this week, as the latest stage of the fight against Covid-19 gets underway.

More than 1.5 million eligible people have so far been invited to book their booster vaccine.

Margaret, a mother-of-two and grandmother-of-four, was reunited with hospital matron May Parson.

She was also having her booster jab, as a frontline health worker – with the pair sharing a big hug.

May was the medic who administered Margaret’s jab on December 8 last year.

As the first person anywhere in the world to have a Covid jab at the start of the mass vaccination programme, the face of Margaret – known as Maggie – was beamed around the globe.

In April 2021, she urged people to get their second jabs and she is now lending her voice to the NHS campaign supporting the booster rollout.

Margaret said: ‘I think, for the few seconds it takes, (they should) go and have the injection because it’s saving their lives; their family’s lives, and saving the NHS.

‘I keep saying this all the time, do go and get your vaccination.’

Margaret has lived in Coventry for more than 60 years but is originally from Enniskillen, Northern Ireland. She only retired from her job working in a jeweller’s five years ago.

She says she ‘doesn’t really know what stops people’ from having the Covid vaccine and that ‘there’s nothing to be frightened of’.

Margaret added: ‘It’s protected me in the mind, as well, you know. I feel quite confident now, going out, places I wouldn’t have thought about before.

‘I felt a bit, not scared, but feel so happy now that I’ve got this done and can be free, if you like.

‘I’m happier that I’ve had the jab, I would have probably gone out but I wouldn’t be very happy about it.’

Asked what her message to the public would be, she said: ‘I’d say go for it, go and have it done, and you’ll feel much better for it – I think that anyway.

‘When you walk down the street, you feel a different person, you feel so happy because you feel it’s going to help you and help others.’

Asked by journalists about her new-found celebrity status, Margaret told journalists she had received ‘loads of letters’ from ‘some lovely people’ in places including Japan, Australia and the United States.

Those eligible for the booster include over-50s, frontline health and care workers and those aged 16-49 at risk of severe illness.

Anyone in those groups who has had their second vaccine at least six months ago will be invited for a booster, and can book here or by calling 119.