Heidi Klum’s daughter is following in her supermodel mom’s footsteps, and the America’s Got Talent judge couldn’t be more proud of her eldest offspring. Leni Klum, 17, is on track for a successful modeling career thanks to a winning combo of genetics and hard work — and mom Heidi just shared the sweetest post about her daughter’s success on social media. 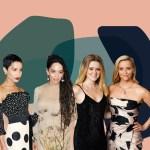 Over the weekend, Heidi added a video of Leni on a modeling job for Chopard diamonds to her Instagram feed. In the footage for the ad campaign, Leni is casually gorgeous in a cream top and light-wash jeans with her sun-kissed locks flowing in the breeze (or fan?). She’s twirling a pink long-stemmed rose with a perfect sultry-yet-sweet model gaze, until something in the distance catches her eye and makes her break into a gorgeous smile. Sade’s “Nothing Can Come Between Us” plays along with the clip.

Klum captioned the pic, “DerApfel fällt nicht weit vom Stamm 🥰🌸❤️💗❤️💗❤️💗❤️💗 CONGRATULATIONS @leniklum.” If your German is a bit rusty, that translates to “the apple doesn’t fall far from the tree” — and we definitely agree.

The mother-daughter love is equally strong in the other direction: Leni, who is Klum’s daughter with Italian business man Flavio Briatore, called her mama her “best friend” in a birthday post on June 1. Leni was raised by adopted father Seal, to whom Klum was married from 2005 to 2014. The celebrity exes have also been co-parenting their children Henry, 15, Johan, 14 and Lou, 11, together since their split in 2012.

“It’s a fun thing for her to do,” Klum told People earlier this month about Leni’s modelong career. “She’s not afraid of cameras because she’s always come to my sets and my shows. She’s quite strong in the sense where she plays with it!”

“I’ve been helping her with deals and she has so many things in the pipeline,” added Klum, who is now married to Tokio Hotel drummer Tom Kaulitz. “It’s really exciting. She’s doing the things I was always dreaming to do!”

“I said to her, at the end of the day you have to be happy with yourself,” Klum concluded in her comments to People. “And don’t do anything you don’t want to do. It’s okay to say no. You don’t always have to please people. But I’m always with Leni. And she has a very good head on her shoulders.”

Before you go, click here to see kids who are following in their supermodel moms’ footsteps.