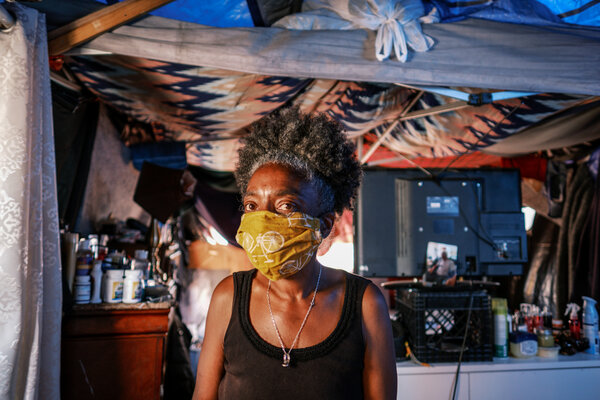 When Kymberli Wilson opens her eyes in the morning, the sight of a solid roof still disorients her.

She and her husband, Lenton, live in a 20-foot trailer at the Coliseum Stadium parking lot in Oakland. Home used to be a tent at the 77th Street homeless encampment, where they had to fill two jugs of water daily and dodge rats at night.

Kymberli and Lenton, 61, arrived at the city-run trailer site last May. But they never expected to stay. In a time of increased investment in helping the homeless, the trailer was offered as a pathway to permanent housing. And this year, a real home seemed within reach for the couple.

But more than a year after arriving at a stadium parking lot that was meant to be temporary, the Wilsons remain in the trailer, and feel no closer to finding permanent housing and leaving life on the streets behind.

The Wilsons are two of the approximately 2,000 homeless seniors in Alameda County. Some have gotten lucky with long-term leases on apartments, group homes and hotel rooms. But the Wilsons’ odyssey through a year of hope and disappointment points to a more persistent crisis for the homeless population that has evaded solutions, despite a significant injection of pandemic-relief money.

“I don’t worry about a virus,” Kymberli Wilson said. “It will be false hope that gets us in the end.”

A little more than a year ago, the Wilsons’ tent-home in Oakland at the 77th Street homeless encampment had no solid walls. At the end of a line of tents, under the overpass of the Coliseum BART station, the structure was unmistakable: a sprawling patchwork of blue tarp, gray nylon and red duct tape stretched over wooden beams. Other homeless residents there called it “the mansion.”

Outside, bikes, lawn mowers and construction tools were sprawled everywhere. Inside, there was a kitchen table, a full-size bed and a dresser full of clothes.

It was all that remained of the couple’s old life. In 2014, both left their jobs at the nearby Oakland Arena — she was a cashier, he was a parking attendant — to care for her father. When her father died in 2015, she and her husband were evicted from her father’s house. They spent a year in a parking lot behind a Church’s Chicken, then moved to the encampment.

They started a landscaping business, pulling their gear on a trailer behind a mint green cruiser bicycle as they rode across the city to tend lawns and dreamed of saving enough to escape. Last year, as Covid-19 swept across the state, the pandemic brought fear and uncertainty but also something unexpected: opportunity.

One morning last year in mid-April, the encampment leader showed up at the Wilsons’ tent with news: Oakland was receiving 67 fully furnished and state-financed trailers from the state’s Office of Emergency Services to house homeless people during the pandemic. Because of their ages, the Wilsons were eligible.

A trailer meant running water and electricity. It meant no more trips across the BART tracks to fill five-gallon jugs with water. And no more noisy generator consuming gallons of costly gas every day. But the Wilsons were hesitant. The trailer was smaller than their tent, with less storage space. And there was no sense of how long they could stay after the pandemic.

“Our tent is all we have,” Kymberli said that night in April. “If we leave, we can never come back.”

Then they heard from a former neighbor that Operation HomeBase, a new city program to help Oakland’s oldest and most vulnerable homeless residents, wouldn’t just provide a trailer, but would also provide a case worker to help them find permanent housing. The couple talked it over, eating Panda Express on the queen-size bed in the so-called mansion. And they decided to take the risk.

“We’re not getting any younger,” Kymberli said at the time. “Every choice we make is to get back inside.”

So on May 28, the Wilsons loaded the possessions they could fit onto their bike trailer — mowers, food, clothes, shoes — and traversed the overpass to a parking lot on Hegenberger Road. They filled out forms, received keys to Unit 46 and walked inside. What they saw stunned them: an open interior, filled with light from six windows. Gleaming brown cabinets, an upholstered couch, a bed and a kitchen table. Air-conditioning, Wi-Fi and an indoor bathroom.

Outside, an awning unfolded with the push of a button. And a community building offered free on-site meals, laundry service and medical support to all residents. As soon as the Wilsons dropped off their belongings, they took celebratory showers.

As the summer faded into the fall, they adjusted. They stopped expecting the sound of rats at night. They got used to using the bathroom without going outside. Three times a day, they got in line with the other residents and enjoyed a free meal — compliments of local restaurants. The Sunday brunch was their favorite: eggs, sausages, hash browns and Danishes. They began to gain weight.

But a promised case worker, who was supposed to help them transition to a home, never materialized. In January, the Wilsons took matters into their own hands. They applied for spots in public and private housing programs. Time and again, they failed to win the housing lottery. They are now on four waiting lists.

Marichelle Alcantara, homeless programs manager for Operation HomeBase, said only one case worker served all 124 of the site’s residents for the first year of the operation. In May, the site hired three more case workers. But the Wilsons, both healthy and without dependents, have not reached the top of the priority list.

“Honestly, we expected people to arrive with their own case workers,” Alcantara said in April. “We were overwhelmed by the demand for support.”

In late April, the city announced that Operation HomeBase would be extended for another year. All residents can continue living at the Hegenberger Road site until 2022.

But the Wilsons feel stuck.

They cannot move forward, and they cannot go back to the tent. Their old “mansion” still sits under the BART overpass, but it is now occupied. Everything the Wilsons left behind there has long since been claimed. Their former friends and neighbors have mostly scattered to state-sponsored hotel rooms under Project Roomkey, another program that started during the pandemic.

“We want a house key. We want to pay rent,” Kymberli said. “We never thought we’d have to wait this long.”

Brett Simpson writes for the Investigative Reporting Program at the University of California, Berkeley, Graduate School of Journalism.

Here’s what else to know today

In a departure from federal guidance issued last week, state officials have said that children will be required to wear masks to attend school in California. But they walked back an earlier suggestion that students who refuse will be barred from campus, The Press-Enterprise reports.

Uduak-Joe Ntuk, the state oil and gas supervisor, rejected 21 applications for fracking permits in western Kern County. It was part of Gov. Gavin Newsom’s stance against fracking, but has been facing pushback from local officials, The Bakersfield Californian reports.

Smoke from the River fire burning north of Fresno has been visible to satellites and has prompted a health caution to San Joaquin Valley residents, The Fresno Bee reports.

Hundreds of millions of marine animals were killed by the combination of intense heat and drought that hit the Western United States and Canada over the past two weeks.

Charles Feezel, known as Chuck, struggled from a young age with physical and mental challenges that required serious psychiatric treatment. Berkeleyside looks into the tragic life of a man who ultimately fell victim to a system that failed him.

The Los Angeles Times looks into the L.A. County sheriff, Alex Villanueva, and his political shift against the liberal constituents who played a major role in electing him. The sheriff will be on the ballot again in 2022.

HBO, aided by its year-old streaming service, HBO Max, led all networks with 130 nominations for the 73rd Emmy Awards that were announced on Tuesday.