At NewYork-Presbyterian Morgan Stanley Children’s Hospital, one of the most highly regarded hospitals in New York City, a rumor spread last week that the line for the coronavirus vaccine on the ninth floor was unguarded and anyone could stealthily join and receive the shot.

Under the rules, the most exposed health care employees were supposed to go first, but soon those from lower-risk departments, including a few who spent much of the pandemic working from home, were getting vaccinated.

The lapse, which occurred within 48 hours of the first doses arriving in the city, incited anger among staff members — and an apology from the hospital.

“I am so disappointed and saddened that this happened,” a top executive at NewYork-Presbyterian Morgan Stanley Children’s Hospital, Dr. Craig Albanese, wrote in an email to staff, which was obtained by The New York Times.

The arrival of the first 40,000 vaccine doses in New York City hospitals last week was greeted with an outpouring of hope from doctors and nurses who had worked through the devastating first wave in March and April. But for now, the vaccine is in very short supply, and some hospitals seem to have stumbled through the rollout.

Most of the vaccinations in the New York region to date have involved hospitals giving shots to their own employees, a relatively easy process compared with what is to come as part of the largest vaccination initiative in the nation since the 1940s.

The dynamics playing out at hospitals in New York City may be emblematic of what may happen across the country in the near future, when all adults will be given a place in the vaccination line by either the government or their employers.

In interviews for this article, more than half a dozen doctors and nurses at New York area hospitals said they were upset at how the vaccine was being distributed at their institutions. They described what had happened to The New York Times but asked that their names not be used because hospitals have shown a willingness to fire or punish employees for speaking to the news media during the pandemic.

At some major hospitals in Manhattan, doctors and nurses have recalled scrolling through social media and pausing to make a snap judgment each time they saw a selfie one of their colleagues had posted of getting vaccinated: Did that person deserve to be vaccinated before they were?

“We feel disrespected and underappreciated due to our second-tier priority for vaccination,” a group of anesthesiologists at Mount Sinai Hospital wrote to administrators over the weekend.

Health care workers said rumors were proliferating in WhatsApp channels and amid the banter of the operating room. Stories have begun to circulate of a plastic surgeon who managed to get vaccinated early, of doses being thrown out at one Manhattan hospital because of poor planning. On group chats, doctors debate how — and whether to — try to get vaccinated ahead of schedule.

At Mount Sinai Hospital, some doctors told others that you could talk your way into receiving a vaccine just by getting in line and repeating that you do “Covid-related procedures,” one Mount Sinai doctor, who requested anonymity for fear of retribution, recalled.

One doctor at the Morgan Stanley Children’s Hospital said, “Clearly, we’re ready to mow each other down for it.”

Many of the rumors have not been true. Still, they illustrate a growing distrust and “every man for himself” attitude, another Mount Sinai doctor said. 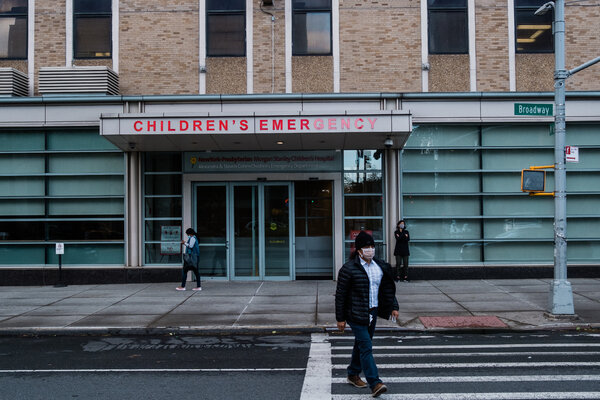 Dr. Ramon Tallaj, who serves on a state task force advising the governor on the vaccine’s roll out, said that ill-will and resentment would fade as the vaccine became more widely available.

“People are going to fight over who goes first, or who doesn’t go first, but the important thing is that it’s happening,” Dr. Tallaj, the chairman of SOMOS Community Care, a network of clinics across New York City that treat many patients from Hispanic and Asian immigrant communities, said of the vaccinations.

Health care workers and nursing home residents and staff members form what is called Phase 1 of New York State’s vaccine distribution plan. About two million people are in this group, and the state’s initial allocation of the vaccine most likely means that Phase 2, which includes essential workers, won’t begin until late January. (Widespread distribution isn’t likely to begin until the summer, officials have said.)

But the state has left it mostly to each health care institution to devise a vaccination plan during the first phase. In the first week of vaccinations, many hospitals chose a wide variety of health care workers — nurses, doctors, housekeepers — from emergency rooms and intensive care units to be the first at their institutions to receive the vaccine. But in the days after the celebrations accompanying the first shots, the moods at hospitals have shifted.

Asked about workers cutting the vaccine line at Morgan Stanley Children’s Hospital, NewYork-Presbyterian said in a statement, “We are proud to have vaccinated thousands of patient-facing employees in just over a week, and we will continue to do so until everyone receives a vaccine. We are following all New York State Department of Health guidelines on vaccine priority, with our initial focus on I.C.U. and E.D. staff and equitable access for all.”

Still, The Times interviewed four health care workers at Morgan Stanley Children’s Hospital, all of whom expressed resentment at colleagues and dismay that hospital administrators had allowed the vaccine distribution system to devolve.

One nurse at Morgan Stanley Children’s Hospital said she had gone as far as to confront a social worker who she believed had jumped the line about why the social worker thought she deserved the vaccine ahead of others.

“She said, ‘We have to go to E.R. sometime,’ but that’s not true,” the nurse said of the social worker.

At some places, doctors and nurses who work in dedicated Covid-19 units were not included in the priority group. At Morgan Stanley Children’s Hospital, some of these nurses said they had yet to be vaccinated a week after vaccinations began.

Another doctor working in an intensive care unit at the children’s hospital recalled the scene last week: A group of staff members were striding energetically toward the elevator banks, where a vaccination station awaited. One of them even explained in passing that they were on their way to get the vaccine.

“It was a free-for-all,” said the doctor, who requested anonymity for fear of retribution from the hospital.

Dr. Albanese, the chief operating officer of the children’s hospital, addressed the free-for-all in the email, placing some blame on the vaccination team for not limiting vaccinations to people on their list.

“We need to prioritize the highest risk teams,” he wrote.

At Mount Sinai Hospital in Manhattan, the vaccine rollout has unfolded in plain view, in the hospital’s atrium, which staff members crisscross throughout the work day or visit to grab a snack or coffee. Many doctors and nurses said they would glance over to see who was standing in line — and whether that person fit the government’s recommendations for those who should be prioritized.

“Despite our strict and stringent vaccination policies and procedures, we are aware of a handful of accusations of improprieties,” Mount Sinai said in a statement. “Due to confidentiality, we cannot speak to any specific individual issue, however, any allegations of any missteps will be appropriately and thoroughly investigated.

This weekend, anesthesiologists — who have played a crucial role in treating the sickest patients during the outbreak in New York — complained as they say they have watched others get vaccinated before them.

That led to the anonymous letter sent to hospital administrators.

“A boiling point was reached when we witnessed vaccines being administered, seemingly at random, to employees who were not a part of the originally-planned cohort,” read the letter, which was sent anonymously in the name of “Concerned Faculty Members” of the department of anesthesiology, perioperative and pain medicine. The letter was first reported by Politico.

In interviews, several anesthesiologists at Mount Sinai noted that their colleagues at some other hospitals had already been vaccinated.

The anesthesiologists said they expected to play a major role in the second wave if hospitalizations kept rising, and in recent days some in the department have gotten vaccinated.

But just last week, an email from the head of the anesthesiology department, Dr. Andrew Leibowitz, asked for volunteers willing to work full time in a unit for critically ill Covid-19 patients if the outbreak worsened. There might be an upside to volunteering, the email noted.

“I am looking into the possibility of having persons volunteering to perform this duty possibly vaccinated earlier than they might otherwise be,” Dr. Leibowitz wrote.

Dr. Leibowitz did not immediately respond to requests for comment.

One anesthesiologist said he recognized it was reasonable to vaccinate the volunteers first.

But also, he said, it “felt that they were using the vaccine as a bargaining chip.”