The campaign material began appearing in Yiddish earlier than usual this year, declaring that the best defense that ultra-Orthodox Jews in New York City could have against a hostile world would be to elect Andrew Yang as mayor.

One ad, invoking a passage from the Babylonian Talmud, told voters that Mr. Yang was the sort of honest man who is loved by God, not someone “who says one thing with his mouth but means another in his heart.”

Another ad cast the choice in existential terms, urging people to vote for Mr. Yang because he alone supports “our right to educate our children according to our fundamentals” and “values our way of life.”

With the June 22 Democratic mayoral primary roughly a month away, Mr. Yang, a former 2020 presidential candidate, has been able to push to the top of the contest through a potent mix of celebrity, optimism and tireless outreach, both in person and on social media.

As he did in his presidential candidacy, which had support from a broad spectrum of disaffected voters, Mr. Yang has been able to widen his appeal in New York, attracting a significant following from influential ultra-Orthodox Jewish leaders.

There are at least 500,000 Orthodox Jews in the New York area, by some estimates, and the endorsement of ultra-Orthodox leaders is highly coveted because the community is seen as a formidable voting bloc, especially in a race that has so far not energized the electorate. 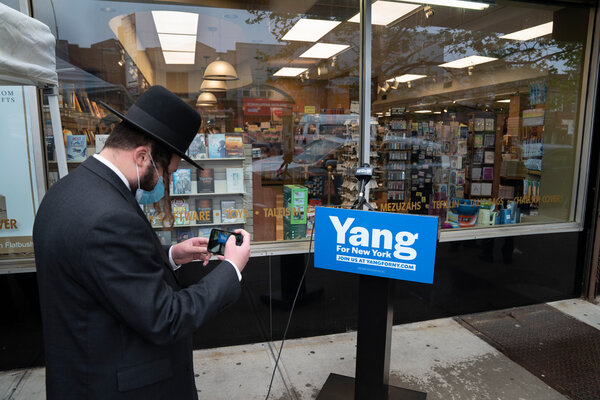 The key for Mr. Yang was his early declaration that he intended to take a laissez-faire attitude toward Hasidic yeshivas, the private schools to which almost all ultra-Orthodox families send their sons, as well as toward the schools where they educate their daughters.

The yeshiva system has faced intense criticism over the failure of some schools to provide a basic secular education. Some also operated secretly during the pandemic, in violation of public health rules.

“We shouldn’t interfere with their religious and parental choice as long as the outcomes are good,” he told The Forward, a Jewish publication, in February.

That approach has helped him undercut rivals, particularly the Brooklyn borough president, Eric Adams, a former state senator who has a long working relationship with the Orthodox community.

In the 2013 Democratic mayoral primary, Hasidic groups in Borough Park, Brooklyn, backed Bill de Blasio, who had once represented the area in the City Council.

But in the last two presidential elections, neighborhoods with large ultra-Orthodox populations were islands of deep red in overwhelmingly blue Brooklyn. Some precincts in Borough Park voted for President Donald J. Trump by more than 90 percent in 2020.

It remains to be seen how much influence Hasidic leaders will have in the Democratic primary; most ultra-Orthodox Jews support the Republican Party, according to a study published last week by the Pew Research Center, and the 2020 presidential election results in Orthodox Brooklyn seem to bear that out.

Nonetheless, for Hasidic leaders, the decision to endorse a newcomer like Mr. Yang over a known quantity like Mr. Adams highlights their anxiety after a yearslong series of calamitous events: a devastating pandemic, a rise in anti-Semitic hate crimes and a long history of clashes with secular authorities over issues like social distancing, measles outbreaks and high school curriculums.

Mr. Yang comes to city politics without the baggage of those past clashes. Capitalizing on that blank slate, he has won over allies with well-honed rhetoric on religious freedom, a sophisticated messaging campaign in Yiddish media and a willingness to adopt the hands-off approach favored by Hasidic leaders.

In past elections, debates over yeshivas often centered on the allocation of public funds to the religious schools, which receive millions of federal, state and city dollars through education and child care programs.

But the political conversation changed after a 2015 legal complaint filed by yeshiva graduates who said they had been given little secular education. That complaint led the city to open an inquiry that found that 26 of 28 yeshivas that were investigated were not meeting a legal requirement to provide education “substantially equivalent” to that provided in city public schools.

No action was taken, but it prompted a citywide dialogue that cut to the heart of the yeshiva’s role in Hasidic society and profoundly insulted many in the community. There are more than 50,000 students in Hasidic schools in New York City, according to a 2017 report by Young Advocates for Fair Education, an ultra-Orthodox advocacy group.

“The perceived threat to the autonomy of the yeshivas is greater now than it ever has been in part because there are critics from within the community publicizing what they see as the problems with the yeshiva system in a way that hasn’t happened before,” said Nathaniel Deutsch, a professor at University of California, Santa Cruz.

Mr. Yang’s approach to the community was on full display at a recent event in Midwood, Brooklyn, where he received the endorsement of two local politicians, Assemblyman Simcha Eichenstein and Councilman Kalman Yeger.

Standing before a crowd of reporters, Mr. Yang vowed to fight anti-Semitism and told Hasidic voters they were part of the “beautiful mosaic” of New York City.

But when asked by The New York Times about yeshivas, Mr. Yang stood quietly behind Mr. Eichenstein and Mr. Yeger as they heatedly defended the schools, attacked “so-called advocates” for reform and decried the city investigation.

Mr. Yang appeared bewildered by their anger — at one point, Mr. Yeger accused members of the City Council of being “OK with our kids getting blown up” — and sought to calm tensions with a joke about the “high-value add” they made to his campaign.

He then took the microphone and criticized the city for allowing investigators “to check for infractions of various kinds” in yeshivas. He said he would take a different approach as mayor.