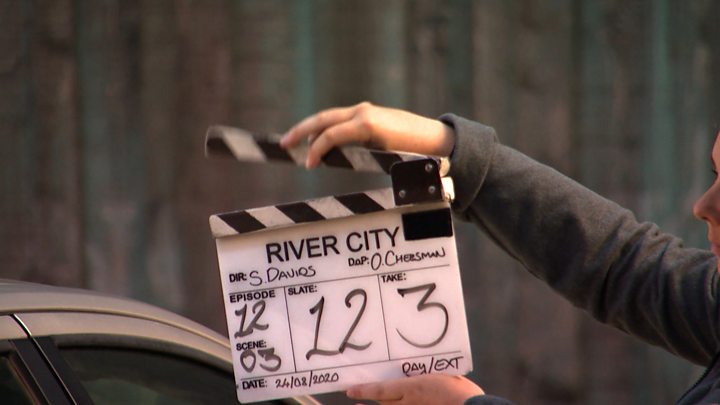 My cousin Louise, an avid fan of River City, who has toured the set on several occasions, has one piece of advice. Don’t eat the cakes, they’re not real.

The problem is that nothing is real in River City. The cakes, the Oyster Café, the pub, the subway. Even Shieldinch itself is just a fictional city suburb, in a soapy version of Scotland.

And yet, returning to set after a five-month hiatus is both scarily real, and strangely surreal.

What is real is the one way system, the reduced cast, the masks worn by crew members in the studios, the two-metre distancing at all times, which is strictly enforced by a member of staff with a long pole.

What is surreal is the social units, built around fictional families, like Lenny and Alex Murdoch (played by Frank Gallagher and Jordan Young).

They work together, and film together but they can’t sit on the same sofa, or share the same meal, even on set, because they are not really related.

So Frank has to film his lines on the other side of the room, and Jordan performs his to a tennis ball on the end of a boom mic, and some clever bod in post production will have to make it look like they have spent the whole of lockdown together.

Elsewhere, they have had to adjust the storylines to deal with challenges, like the fact that Scarlett’s shop is too small for socially distanced filming, and that with only two extras per unit, one of them has to be able to drive a car to provide maximum value.

The covered backlot is no longer in use, but there is a spot in Shieldinch Underground Station which is rarely used so a writer is given a nudge to find a reason to set a scene there. 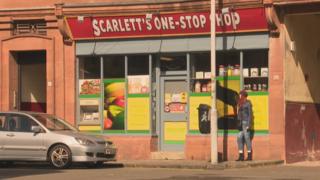 There is another surreal moment when I spot a familiar red-haired woman, watching from a distance, and realise on closer inspection, she is one of a number of mannequins, placed around the set to help fill it up.

Everything takes a little longer. Actors have to do their own hair and makeup. Each has a little kit which they carry around the set. Every so often, they will step off set, and touch up their hair and makeup themselves, with a distanced assistant acting as a mirror.

The biggest problem say the make-up artists, is actually hair. With no hairspray allowed on set, no hairdryers, and no cover from the rain, it is going to be a challenge.

A serum helps keep it in place – and the sought-after look is “lockdown casual” although thankfully no-one is sporting a DIY hair cut or colour here.

As well as looking after their own hair, make-up and costumes, and not sharing dressing rooms, actors must look after their own props, whether that is a cup or a car. Once you have touched it, it is your responsibility.

To make things even more surreal, there’s another programme on location in the Dumbarton studios, Vigil, which is part set on a nuclear submarine.

With no chance of social distancing on a submarine (even a pretend one) the entire team are working in a self contained unit, with regular testing. This is endlessly fascinating for the team on River City, who are still getting to grips with their own regime.

Covid looms large over the whole location, and the relief of being back in work in an industry which has been hit disproportionately hard, is tempered by the understanding that this is a fragile arrangement.

If all goes to plan, River City will be back on our screens in October, initially for half-hour episodes only. At least one character will get the virus onscreen and the repercussions will be an important storyline.

Apart from that, life in Shieldinch, like Scotland, will continue as normal. A new normal.