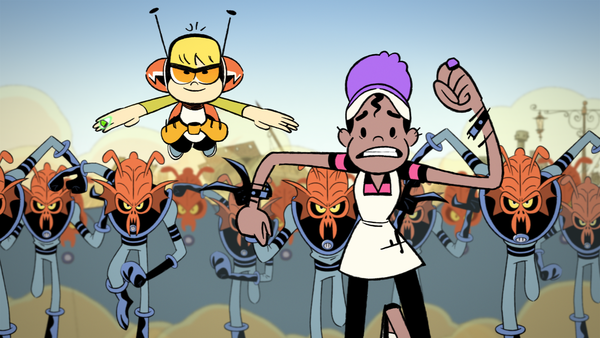 ‘Kid Cosmic’
When to watch: Now, on Netflix.

This new series from the creator of “The Powerpuff Girls,” Craig McCracken, follows a plucky hero, Kid, who discovers five powerful rings in the wreckage of an alien spaceship. He accidentally forms a kind of superhero squad, which includes a teen waitress, an older neighbor with a white beard, a 4-year-old girl and a cat named Tuna Sandwich. There are plenty of solid jokes and decent lessons, and the show’s newsprint-comic aesthetic is both retro and fresh. If you want a show for kids that is appropriately energetic but not grating, watch this.

Sam Heughan and Graham McTavish star on “Outlander” and team up here for a cute travel series through Scotland. Although the first episode is about cuisine, it’s not all food and whisky; the second is about Scottish sports, and later episodes cover music and witchcraft. If you’ve seen “The Wine Show,” which follows the actors Matthew Rhys and Matthew Goode as they learn about wine, but mostly as they just kind of hang out and make each other laugh, this is very similar, except with more sweaters. Heughan and McTavish seem to be having a ball, and it’s nice to remember a time when road trips were good and normal.

… a few hours, and I like reality show bickering

‘The Bridge’
When to watch: Now, on HBO Max.

There are a few murder shows called “The Bridge,” but this is a six-episode British reality-contest show in which the 12 participants have to live on an island and build an 850-foot floating bridge in order to win a cash prize. The show is more “Kid Nation” than “Survivor,” and the producers are patient, crafty monsters whose twists and prompts elicit juicy fights, hushed gossip, a few alliances and some good disparaging nicknames for those alliances. The bridge building is mostly a backdrop for interpersonal conflict and nosiness, so I’m holding out hope that Season 2 will be called “The Hole” and contestants will simply dig a huge hole together.