Hurricane Elsa, the first of the 2021 Atlantic hurricane season, battered the Caribbean islands, leaving at least three dead as it felled trees and buildings. Now, some 180,000 have been evacuated in Cuba amid fears the storm could unleash deadly flooding before moving up to Florida, Georgia and the Carolinas.

According to the latest forecast from the National Oceanic and Atmospheric Administration (NOAA), hurricane-force winds will batter Cuba on Monday from 8am EDT (1pm BST).

The storm will then churn north, hitting the bottom of the Florida panhandle on Monday evening around 8pm EDT (1am Tuesday BST).

Tuesday will see the storm battering Florida, before it weakens and tracks northeast over Georgia on Wednesday. 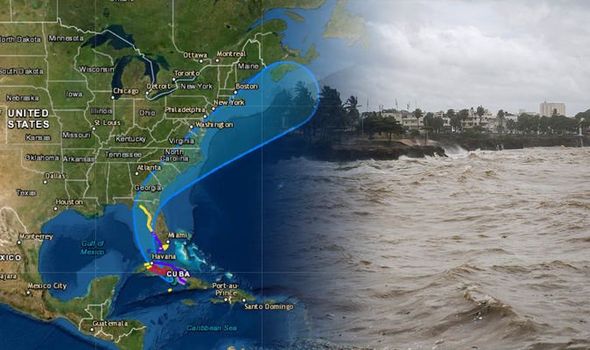 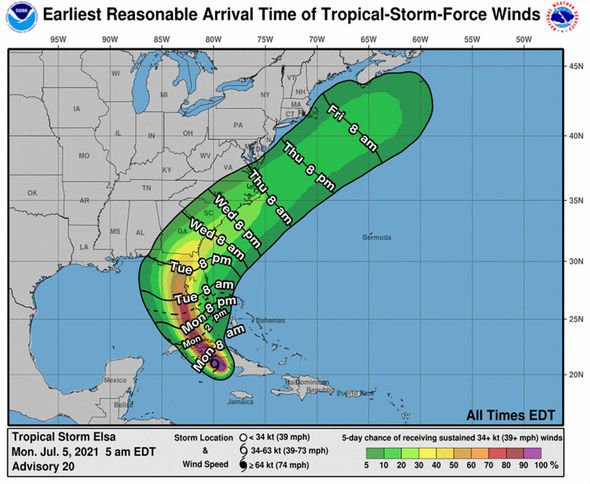 The latest public advisory from NOAA said: “On the forecast track, Elsa is expected to move across central and western Cuba later today and head toward the Florida Straits tonight, and pass near the Florida Keys early Tuesday.

“Elsa is then forecast to move near or over portions of the west coast of Florida on Tuesday and Wednesday.”

Currently, maximum sustained winds are near 65mph (100 km/h) with higher gusts, and tropical-storm-force winds are extending outward up to 80 miles (130 km) from the centre of the storm system.

Some strengthening is possible before Elsa moves over Cuba later today, NOAA said, followed by some weakening while the centre moves over land. 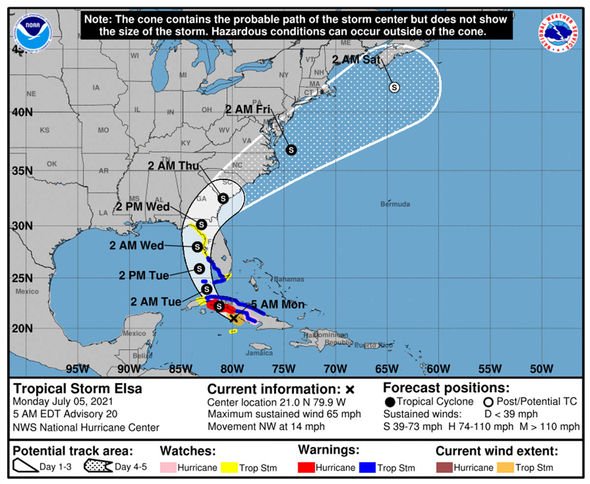 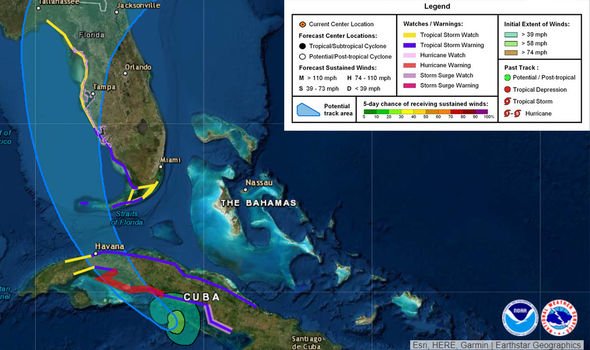 Watches and warnings in place

NOAA has issued the following watches and warnings:

A Hurricane Warning is in effect for:

A Hurricane Watch is in effect for:

A Tropical Storm Warning is in effect for:

A Storm Surge Watch is in effect for:

A Tropical Storm Watch is in effect for:

So far, the Caribbean has been the hardest hit by the full force of Elsa.

The storm killed one person in Saint Lucia, according to the Caribbean Disaster Emergency Management Agency.

Meanwhile, a 15-year-old boy and a 75-year-old woman died on Saturday in separate events in the Dominican Republic after walls collapsed on them, according to a statement from the Emergency Operations Center.

Barbados was also among the hardest-hit areas, with more than 1,100 people reporting damaged houses, including 62 homes that completely collapsed as the government promised to find and fund temporary housing to avoid clustering people in shelters amid the pandemic. 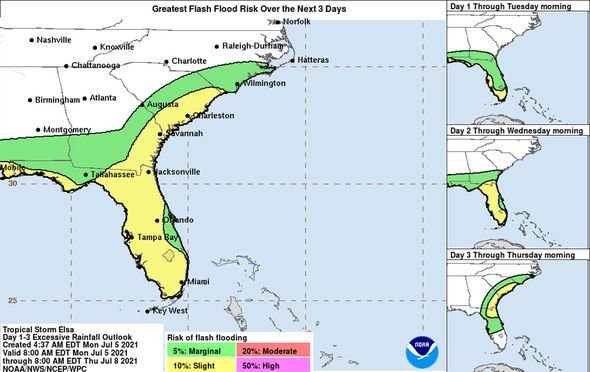 Wilfred Abrahams, Barbados’ minister of home affairs, told the Miami Herald: “We have been significantly affected.

“There are downed power lines across Barbados, live power lines, downed trees, some roads are impassable.”

Downed trees also were reported in Haiti, which is especially vulnerable to floods and landslides because of widespread erosion and deforestation