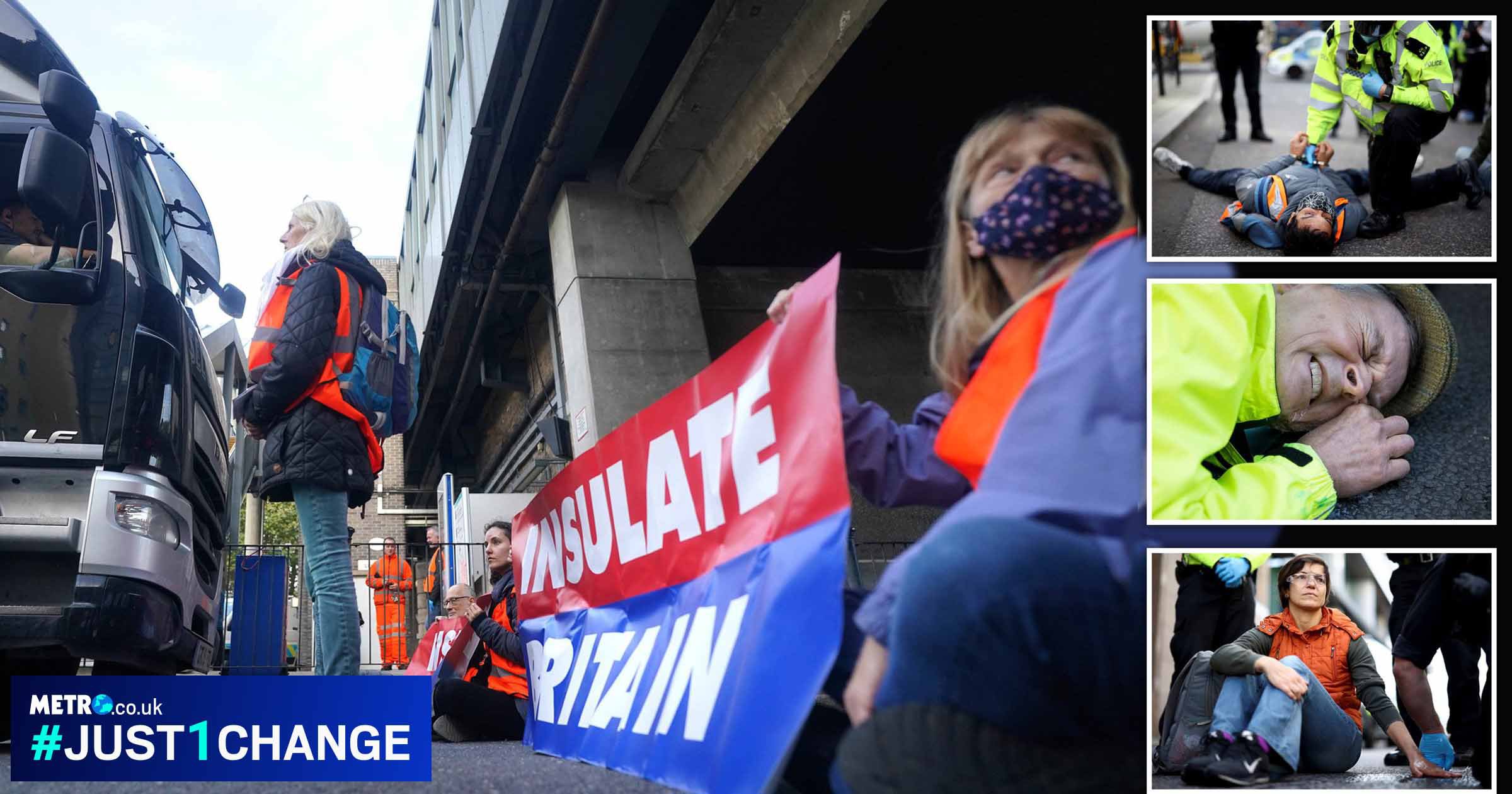 Since Insulate Britain started dominating the headlines, I feel like we have been taking steps backwards in terms of saving the planet.

It’s a real kick in the teeth if, like me, you’re passionate about supporting positive, sustainable and environmentally friendly practices.

Watching footage online of a crying lady trying to follow her mother to hospital but being blocked from doing so by Insulate Britain protestors and reading of the understandable backlash from the public made me feel like all the progress climate activists have made in recent years is unravelling before my eyes.

In 2015 I launched a sustainable fashion brand – driven by my love of fashion and a desire to help the planet.

So it’s devastating to see this group give a bad name to campaigners like me – and many who make far more compelling arguments as to why we should care more for the earth – using tactics that are pushing people away from the cause.

It is infuriating to have environmentalism be made to look so foolish.

With the dangers of climate change becoming increasingly concerning, I understand why Insulate Britain activists are rightly arguing that greater home insulation for everyone across the country is also crucial. But how could they possibly believe that blocking the M25 is the best way of convincing the public that this is important?

If you are worried about getting to work to make money to pay the bills, being stuck in gridlocked traffic due to some sanctimonious Insulate Britain protestors stopping you on your way, isn’t going to encourage you to get behind their cause.

It angers me greatly that they believe disruptive tactics like these could ever work.

I have been vocal on TV and radio about explaining why I think wearing the same item of clothing for three decades can be both appealing to customers and better for the planet. I have protested against unethical fast fashion retailers on a few occasions in London outside some major high street fashion chains. I know what it means to be passionate about protecting our planet and taking to the streets in a demonstration.

I would rather not participate in any environmental activism that causes roadblocks, however because it not only causes inconvenience, it puts lives in danger. The harmful consequences of such actions are worth considering before glorifying such activism.

I felt so embarrassed for climate change activists everywhere when I recently saw footage of angry members of the public in London dragging a bunch of pathetic-looking Insulate Britain protestors sitting in the middle of a busy commuter street. I feel they are giving us all a bad reputation by association.

What I find most confusing about them is what exactly they are proposing will change as a result of their actions.

At best, they have divided the public, and no doubt fuelled the Government’s proposed Police, Crime, Sentencing and Courts Bill, currently under consideration in the House Of Lords, which will introduce ‘proportionate’ measures to enable the police to deal with disruptive protests which some fear will tip the balance of power and affect even peaceful protests.

It’s insulting, especially as the climate is in real need of people standing up to take action. Just not the kind this group is doing.

Around half a million tons of microfibre – the equivalent of 3million barrels of oil – is being dumped into the ocean every year. The fashion industry is responsible for more carbon emissions than all international flights and maritime shipping combined. Clothing production doubled between 2000 and 2014, which means it is crucially important to ensure that clothes are produced as ethically and sustainably as possible.

I am trying to combat this by only producing items that come with a 30 year guarantee – meaning that, if anything happens to it, we’ll repair it free of charge. We’re actively not further exacerbating the devastating effect the fashion industry has on the environment.

My love of keeping clothing for longer stems from my belief that garments have memories attached to them and become historical artefacts as a result.

I am passionate about anything that we can do to combat the acceleration of environmental damage, which is why I have been so disgusted by Insulate Britain’s actions in recent weeks.

How come Liam Norton, a leader in the movement, hasn’t even bothered to insulate his own home? When he was asked why he hasn’t on talkRADIO, Liam replied: ‘Because I’m a hypocrite’.

If Liam can’t afford home insulation, why doesn’t he borrow money to pay for it? If home insulation really is the deciding factor in terms of the potential immediate end of the human race, surely getting into debt will be well worth it?

It was also reported recently that another Insulate Britain leader, Roger Hallam keeps a convoy of six diesel guzzling vehicles on his organic farm and Cameron Ford, another protestor who recently blocked the M25, previously drove over 10,000 miles on holiday in a diesel van all the way from Cambridge to Poland claiming ‘I am not perfect’. These people cannot seriously expect to be trusted to teach the general public about best climate-friendly practices?

I’m so angry about this hypocrisy I have released a ‘F*ck Insulate Britain’ sweatshirt and T-shirt – with the proceeds going to charity – because I feel they are doing such damage to the reputation of eco activists and their ‘protests’ are counterproductive.

I hope we can move away from political tribalism like Insulate Britain. If anyone wants to do something realistic to combat climate change, I would suggest lobbying the government for the introduction of a proper carbon tax.

Nobody is going to be compelled to think about measures they could take, big or small, if they are too busy being inconvenienced by Insulate Britain.

I am no fan of this Conservative Government and, as I said, I agree that better home insulation for all would be a positive development but I am not going to sit and listen to Liam and the rest of his gang compare critics to those who appeased Hitler while they stop people from getting to hospital. It’s unforgivable.

BEIJING (Reuters) – Two months since many Chinese homebuyers stopped repaying mortgages to protest stalled construction on their properties, a lack of progress at more…

Hot weather, heavy use of energy and one more shutdown of a large coal-fired power plant contributed to thousands of Xcel Energy customers losing control…