KALININGRAD, Russia — Aleksandr Dobralsky took to the streets to protest the arrest this past month of Russia’s most prominent opposition leader. But he had other grievances as well.

“It’s like somebody stepped on your toe and said, ‘Just be patient with this for a little while,’” Mr. Dobralsky, a lawyer, said of the country’s economic woes. “How can you just wait for it to be over?”

Opinion polls have for a few years been tracking a pivot in the national mood, away from what was called the “Crimea consensus” of wide support for President Vladimir V. Putin for annexing the Ukrainian peninsula. Now, people are focused on their disappointment over slumping wages and pensions.

In Russia, the competition between the rally-around-the-flag effect of Mr. Putin’s assertive foreign policy and anger over the sagging economy is often referred to as the battle between the television and the refrigerator: Do Russians pay attention to the patriotic news on TV or notice their empty fridges?

“Rallying around the flag is no longer an antidote against protest,” Ekaterina Schulmann, an associate fellow in the Russia and Eurasia program at the British research institute Chatham House, said in a telephone interview. 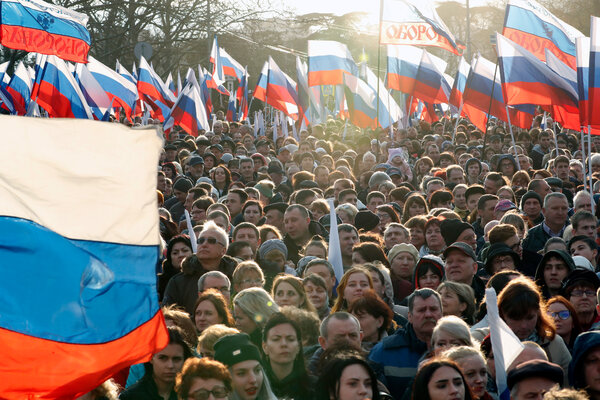 A number of factors eroded the Crimea consensus. The year Mr. Putin annexed Crimea, 2014, his approval ratings at home soared even as European countries, the United States and others responded with sanctions that threatened Russia’s economy.

The confrontational foreign policy was initially wildly popular, while the economic pain took years to work its way into politics.

But financial stagnation brought on by sanctions, a decrease in foreign investment amid tensions with the West and low oil prices have forced the Kremlin to impose unpopular policies, including raising the retirement age to shore up government pension funds.

Russians’ average take-home wages adjusted for inflation have been declining since the Ukraine crisis. They are now 10 percent lower than seven years ago.

It is taking a toll on support for the Putin government. A range of opposition groups have taken to the streets, from Communists to right-wing nationalists. “If you don’t already have a place in the system, you don’t stand a chance” of finding work, Mr. Dobralsky said.

And, political analysts say, it is no coincidence that protests have seeped out of the wealthy cities of Moscow and St. Petersburg to Russia’s far-flung provinces, which are feeling the economic pain more acutely.

Protests have been reported in more than 100 cities and towns, from Vladivostok on the Pacific Ocean to Kaliningrad, Russia’s westernmost city. Such remote cities and towns were once seen as hotbeds of support for Mr. Putin.

But after a protest movement Aleksei A. Navalny led in 2011 and 2012 in Moscow, the government poured money into popular urban renewal projects that blunted political opposition, like sprucing up parks and repaving sidewalks.

Meanwhile, the Kremlin muddled its own portrayal of the country as a fortress besieged by an encroaching West by hosting and promoting the 2018 World Cup, exposing Russians to tens of thousands of friendly foreign soccer fans.

In Mr. Dobralsky’s hometown, Kaliningrad, a Russian exclave between Poland and Lithuania, state propaganda warning of foreign danger was always a tough sell.

“They say, ‘The Americans are building a military base in Poland,’” Dmitry Feldman, a graphic designer working in Kaliningrad, said of the television news. “But we know the Poles. You ask an ordinary dude in Poland, ‘Do you want to conquer Siberia?’ and they don’t know what you are talking about.”

To be sure, extraordinary circumstances unrelated to Russia’s long economic slide touched off the protests. Protesters said they were outraged by Mr. Navalny’s arrest after he returned to Russia from treatment in Germany for a nerve agent poisoning, and by Mr. Navalny’s subsequent release of a video accusing Mr. Putin of corruption and of building himself an opulent palace. Mr. Navalny blamed the Kremlin for the attack, in which he said agents placed a near-lethal dose of nerve poison in his underwear.

“I would look at it the other way around,” said Ms. Schulmann, the political scientist. “When political factors change, the economy also becomes important. People are saying, ‘Yes, this happened and groceries are getting more expensive, too.’”