JERUSALEM — A police officer who fatally shot an unarmed Palestinian man with autism was charged with manslaughter on Thursday, in a case that brought attention to the issue of police brutality.

The family of the 31-year-old victim, Iyad al-Hallaq, expressed frustration that the authorities did not indict the officer on a more severe charge.

Mr. al-Hallaq was shot last year on May 30 during his morning commute to a school for adults with disabilities in Jerusalem’s Old City. His death prompted comparisons to the killing of George Floyd by police officers in Minneapolis days earlier. And Mr. al-Hallaq’s picture was raised at many demonstrations in Jerusalem and Tel Aviv over the past year.

The prosecutors filed the indictment after coming under criticism in recent weeks because they still had not charged anyone a year after the killing.

For decades, efforts to rein in violent officers and impose accountability for their actions in Israel have repeatedly failed. The majority of complaints of police violence are never investigated, according to Justice Ministry records. Those that are almost never lead to criminal charges or even disciplinary action.

Prosecutors have said that they face enormous obstacles in pursuing such cases, such as police officers who refuse to incriminate one another and judges who are sympathetic to officers. Many Palestinians don’t bother filing complaints, prosecutors say, because they have such little trust in the system.

The officer charged on Thursday, whose full name has not been released publicly, could face up to 12 years in prison if convicted.

A statement by the prosecutors accused him of taking “an unreasonable risk” by opening fire on Mr. al-Hallaq, who they said “performed no action that justified the shooting.”

Khairi al-Hallaq, the victim’s father, protested the manslaughter charge as too lenient, calling it “unjust” and “unacceptable.”

“I’m angry,” he said by telephone. “The officer purposefully killed my son. Why only a maximum of 12 years behind bars? That’s insufficient.” 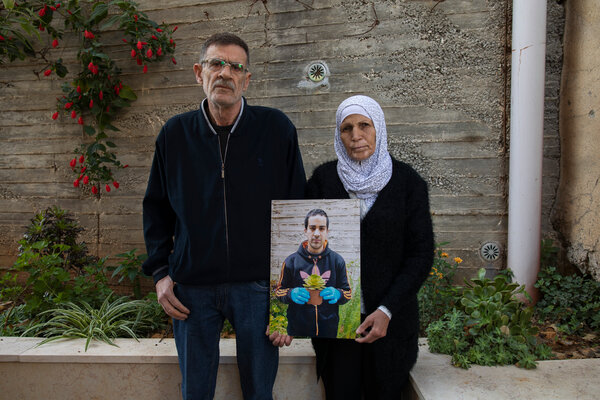 Efrat Nahmani Bar, the charged officer’s lawyer, called Mr. al-Hallaq’s killing “a horrible tragedy.” But her client was “absolutely positive he was dealing with a terrorist who was endangering his life,” she said.

“He was not operating in a laboratory,” she added. “Everything happened very quickly in one of the most dangerous places in the country.”

Ms. Nahmani Bar also emphasized her client’s youth — he was 19 at the time — saying he had finished his basic training just a few weeks earlier.

Mr. al-Hallaq, who lived in small home with his mother, father and sister outside the Old City, aroused the suspicions of police officers on a Saturday morning when he exhibited unspecified “certain characteristics in his behavior,” leading them to fear he was a “terrorist,” according to the indictment.

When he did not obey the officers’ commands to stop, they ran after him. One of them, a commander who was to leave the force within days, shot twice at Mr. al-Hallaq’s legs while pursuing him but missed, the indictment said.

Mr. al-Hallaq turned into an enclosed area, according to witnesses, he crouched in fear in a corner. Among those looking on was one of the teachers from his school.

The teacher, Warda Abu Hadid, has said that she yelled to the officers that Mr. al-Hallaq was disabled and posed no threat, but the indictment does not mention that.

When the officer now being charged arrived and spotted Mr. al-Hallaq in the corner, he shot him once in the abdomen, the indictment said. After that, his commander shouted at him to cease fire.

One of the officers then asked Mr. al-Hallaq, in Arabic, “Where is the gun?” the indictment said. When he did not answer, the officer asked the teacher the same question, to which she replied, “What gun?”

At that point, the officer who was charged fired a second shot at Mr. al-Hallaq, killing him, according to the indictment.

Nitzan Horowitz, a left-wing minister in the newly formed Israeli government, welcomed the decision to charge the officer, calling it “necessary to preserve our moral backbone.”

But Ayman Odeh, the leader of an alliance of three Arab-majority parties, blasted the decision, saying the “infuriating and contemptible” charge allows for the “murder of any Palestinian who does not look good in the eye of a police officer or soldier.”

Mr. al-Hallaq’s father said his wife was still struggling to cope with her son’s loss.