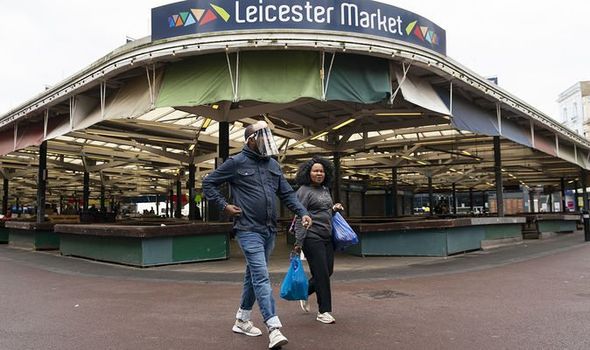 But infections are not falling fast enough to warrant a complete citywide lifting of restrictions. It is now two weeks since Matt Hancock announced Leicester would be the first city in the UK to be put under a local lockdown. Data shows 115 cases per 100,000 people were detected in the seven days to July 9, down slightly down on the 120 cases per 100,000 people in the previous week.

The Health Secretary spoke with the city’s Mayor Peter Soulsby yesterday and has suggested that officials could be more targeted in their approach.

He said that more than 100 “local actions” are being taken across the country each week to tackle outbreaks of Covid-19.

Mr Hancock said: “Each week there are more than 100 local actions taken across the country – some of these will make the news, but many more are swiftly and silently dealt with.

“This is thanks in large part to the incredible efforts of local authorities – all of whom have stepped up and published their local outbreak control plans in line with the end of June deadline.”

His comments come after 73 cases of the virus were confirmed at a farm in Herefordshire, leading to around 200 workers being quarantined as a precautionary measure.

In an article for The Daily Telegraph, the Health Secretary said officials will “hunt down the virus” by targeting areas of concern.

An increased testing capacity means the Government can take “more targeted local action and less national lockdown” to allow the easing of measures for the majority of the country, he said.

He said that door-to-door testing, which was utilised in the worst-hit areas of Leicester, is to be used more widely to curb outbreaks in the coming months.

Portable walk-in centres will also be stationed in areas where there is a flare-up of the virus.

One of the Government’s deputy chief medical officers said any decision to lift Leicester’s lockdown “can’t be rushed”.

Professor Jonathan Van-Tam said that a lockdown exit plan for the city depends on value judgments by public health professionals on when COVID-19 rates are “consistently and obviously” falling.

Mr Van-Tam told BBC Radio Leicester that data published on Saturday showed the city is “really quite an outlier” compared with anywhere else in the country.

He said: “The situation has improved but it needs to go further.”

Professor Van-Tam said any “exit plan” would depend on several factors.

The professor said: “The clear exit plan is when a number of things come together – that the disease rate is consistently and obviously falling … that it is comparable and sensibly comparable with other areas of the country, when the swab positivity rate is dropping and holding its drop, and when there is a clear understanding that everything is in place to be able to keep it that way.

“All of these things are value judgments by professional public health specialists – this can’t be rushed.”

Pressed on whether Leicester’s lockdown is likely to be lifted after a review expected next Saturday, Professor Van-Tam said: “With any of these things, usually the way that one approaches them from a public health perspective is to take a phased approach.

“I think that’s a reasonable expectation to set.”