Ten people were hurt, none of them seriously, when an explosion ripped through a three-story house in the Bronx on Thursday, officials said.

It was not immediately clear what caused the blast. Fire marshals were investigating, as were Con Edison employees, officials said. A Con Edison spokesman said that the utility was not doing work at the house at the time of the explosion and that gas service had been shut off after the incident.

Officials initially said that two of those injured in the blast, including a child, had been taken to the hospital in critical condition. But a hospital spokesman later said none of the nine patients treated by trauma specialists there had life-threatening injuries.

The explosion’s force blew one of the house’s doors off its hinges and across the street, where it hung from telephone wires in the frigid air as night fell and investigators scoured the house and the area around it. 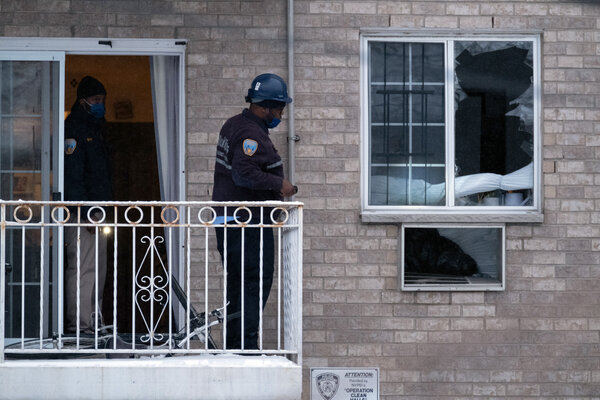 Residents, still looking stunned in the explosion’s aftermath, grabbed clothes and blankets from their homes. A black cat that appeared to have burn wounds slinked around in the snow near the remnants of windows that had been knocked from their frames.

Genesis Garcia, 18, said she was cleaning her room in her family’s first-floor home when she heard a loud boom and felt the building shake.

Ms. Garcia, like her neighbors, spent hours in the cold helping her family grab things from their home. She was grateful that her dogs and five ferrets, bundled up together in a blanket, were safe.

The blast, on Paulding Avenue in the Westchester Square neighborhood, occurred just before 3:30 p.m. and was under control in about an hour, fire officials said. Ten people, including a firefighter with a minor injury, were injured, and most of them were taken to Jacobi Medical Center, fire officials said.

By 7 p.m., one person had been released and the rest were being treated in the hospital’s trauma center for injuries that were not life-threatening, said John C. Doyle, a spokesman for Jacobi.

Inspectors and engineers from the Buildings Department were assessing the house’s structural stability, an agency spokesman said. Department records indicated that the blast happened on the second floor of the property, which had no outstanding violation.

The house is one of four in a row that are owned by Trackside Homes L.L.C. of the Bronx, according to city property records. The property’s owner could not immediately be reached.

Alberto Martinez, 50, was among the residents taking stock of the damage on Thursday evening.

Mr. Martinez told reporters that he had rushed home from his job at a Manhattan law firm after hearing about the explosion. He said his wife, Norma Galarza, had been home when the blast happened and had run outside. She saw a neighbor whose two children she often babysits for calling for help, Mr. Martinez said.

“The parent was out the window begging for help because she didn’t know what to do at that point,” he said. “So my wife just asked her to throw the baby down.”

Ms. Galarza caught the baby, he said, and the neighbor and the second child, a toddler, eventually got out of the building safely. Mr. Martinez said he was proud of his wife’s bravery.

“I would never expect anything less of her,” he said.