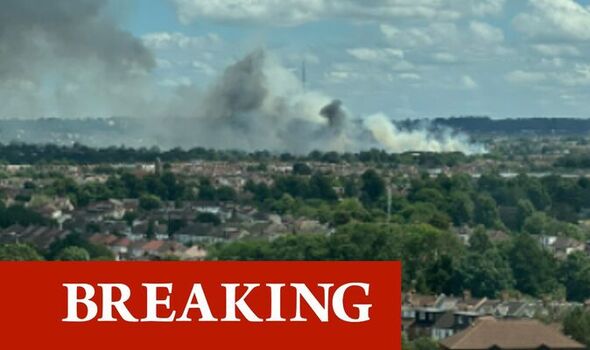 School fields as well as wasteland and shrubbery have caught alight.

Locals are being warned to keep windows and doors shut to protect against the massive plumes of smoke emerging from the blaze.

There are even reports on social media that people have been forced to evacuate their homes in the area.

Twelve fire engines and around 80 firefighters are on the scene near Turle Road.

The London Fire Brigade have warned that the fire “is producing heavy smoke”.

Pictures show the smoke as visible from miles away.

One social media user said they were “praying they get it under control”.

Another added: “Ash falling through my skylights, smoke blocking out the sun. Quite freaky.

“Lots of sirens. Hope everyone is OK.”

The Brigade’s 999 Control Officers have taken over 70 calls to the blaze.

London Fire Brigade has said that the cause of the fire is not known at this time.

It was first called at 12.27pm to a grass fire near Turle Road in Norbury.