The same RNLI lifeguards also launched to rescue a person in difficulty caught in a strong rip current, while a few days later the same lifeguards had to deal with eight lost children in one day also at Fistral beach. The RNLI is urging beachgoers to be vigilant when entering the water and always keep a close eye on their family, both on the beach and in the water.

Senior RNLI lifeguard Arron Evans said the mass rescue – which happened on July 25 and involved nine bodyboarders and one swimmer being dragged 75 metres out to sea in a strong prevailing rip current outside of the red and yellow flags – was so bad it prompted the RNLI to red flag the whole beach.

Speaking to CornwallLive, he added: “This was a mass rescue which involved two of our lifeguards going back and forth on rescue boards and RNLI lifeguard Angel Daimay also supporting them on the shoreline – it was an amazing team effort in challenging sea conditions.

“These conditions prove just how powerful rip currents can be and how suddenly the sea state can change. As professional lifeguards, we have the local knowledge of rip currents and areas that are renowned for being dangerous so we always prepare and assess according to the conditions which constantly change throughout the day.

“During a mass rescue, it’s so important to keep an eye on the wider picture so immediately after this incident we made the decision to red flag the entire beach and reassess the sea conditions. After careful consideration, we decided to open a small bathing area so we could keep a condensed vision and advise anybody who entered the water to remain at waist-depth and keep a close eye on whoever they were in the water with.” 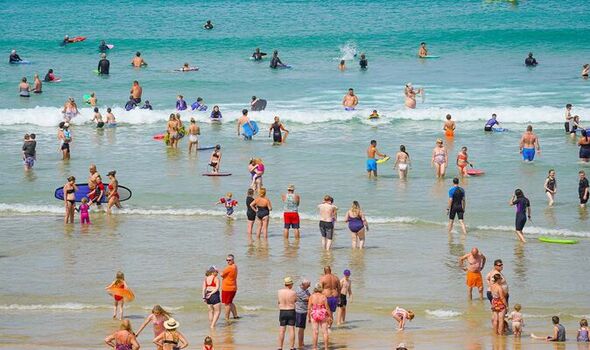 Another person ended up in difficulty not long after that after a strong rip current had pulled them out to sea and they were struggling to swim back to shore. The casualty, Darren Callander, said: “As a family, we have been visiting Cornwall for the past five years and with two children, now aged 12 and 13, having RNLI lifeguards present on the beaches we visit gives us great peace of mind.

‘Thankfully, up until last week we have never needed their assistance, however, last week the speed in which the lifeguard came to my rescue was incredibly quick and I cannot thank them all enough for the care I received that day, it was greatly appreciated – who knows what the outcome would have been if the RNLI hadn’t been on the beach that day to help me.’

Fistral RNLI lifeguards also rescued an experienced surfer on Sunday (July 31) during what was a busy week after he suddenly felt his blood sugar level rapidly drop and as a result began to lose consciousness. The surfer continued to lie down hugging his surfboard as a floatation device.

Two people spotted the casualty floating on a surfboard and quickly swam over to them. They held his head up out of the water and the entire surfing line-up nearby waved for help. The surfer was picked upon the back of the rescue sled by lifeguards having thankfully regained consciousness while still in the water.

On Monday (August 1) lifeguards at the famous surf beach also had to deal with eight missing children, all of whom were quickly reunited with their families.

Arron added: “The sea state can change very quickly and if you find yourself suddenly caught in a rip current it’s important to follow this simple safety advice. Swim parallel to the shore until free of the rip and then head for shore, do not try to swim against the rip current or you’ll get exhausted and always raise your hand and shout for help.”

The RNLI is urging anyone visiting the coast this summer to make sure they keep themselves and their families safe by following beach safety advice: