Mirror mirror on the wall, who’s the lustiest couple of them all? If you watched the Billboard Music Awards last night, or have been anywhere on the internet since, there is only one answer: Megan Fox and Machine Gun Kelly, the latter of whom just took home three awards for best rock artist, best rock album, and best rock song. It’s safe to say that Kelly (née Colson Baker) is feeling on top of the world with his scantily-clad boo at his side, and he is celebrating in a way fans have simply never seen before: dying his tongue black and engaging in some downright randy PDA on the Billboards red carpet. Between Fox’s really, truly barely-there ensemble and Kelly’s unique styling, this is a red carpet couple the world won’t be forgetting anytime soon. 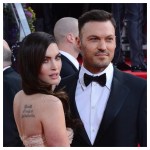 Fox is channeling her sex symbol side in a cut-out Mugler gown that bares cleavage and midriff all at once, with a long gauzy skirt wrapped around her legs. MGK’s look is comparatively almost traditional with a white shirt and black jacket, but the shirt is unbuttoned to best show off his tattoos and his tongue is, as mentioned, jet black.

Fox and Kelly were all over each other from their red carpet entrance to their highly photographed exit, and it’s clear this couple is going strong a little over a year since their whirlwind romance began. After shooting Midnight in the Switchgrass with Kelly in Puerto Rico, Fox announced her separation from estranged husband Brian Austin Green and debuted her romance with Kelly shortly thereafter — though her initial Instagram ode to her new love was met with some derision from critics including Green himself, who repurposed her caption of “achingly beautiful boy” on a photo of his and Fox’s sons.

Perhaps that’s why Fox has banned comments on her new post with Kelly too…though after last night, it’s hard to imagine anything getting these two down.

Before you go, click here to see all the celebrity couples who met on set.