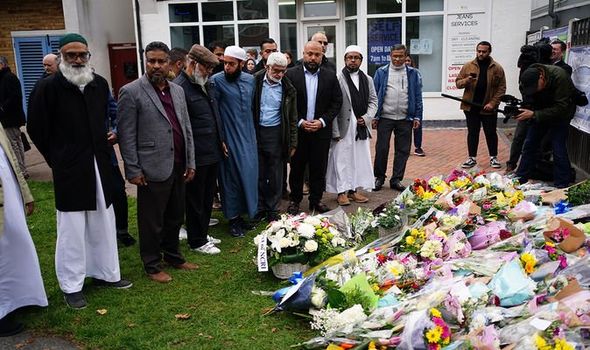 It came as police said the attack may be linked to Islamist extremism.

The emotional statement was issued as leaders from various different religious and ethnic groups, local politicians and residents paid tribute to Sir David at the scene of his death yesterday.

A steady stream of mourners laid flowers with tributes to Sir David at both ends of the police cordon.

Many branded him an ally and friend and noted that his “infectious smile” would never fade from memory.

One local councillor told how Sir David had “helped so many refugees”.

In the joint statement published on behalf of “all Southend mosques” it said that the father-of-five was an “upstanding friend to our Muslim community” and attended key events, including weddings, mosque openings and the launch of the town’s first Muslim Scout group.

They said their thoughts and prayers were with Sir David’s family, friends and colleagues.

“Sir David’s murder was an indefensible atrocity, committed on the grounds of a place of worship and we condemn it in the strongest possible terms,” the statement said.

“This act was committed in the name of blind hatred, and we look forward to the perpetrator being brought to justice.”

Members of Southend’s Muslim community joined leaders from many other faiths and people from across the political spectrum in paying their respects to Sir David yesterday.

“There are some Iranians in London he has helped so often with family and problems, even in their own country,” he said.

“They hold great respect and admiration for him and they are as devastated as we are that this has happened to him.”

Ruhul Shamsuddin, joint secretary of Essex Jamme Masjid, described the MP as a “tremendous force for good and pillar of support for our community”.

“This was senseless violence against a truly wonderful man,” he said.

Meanwhile, an Iranian opposition group has paid tribute to Sir David, describing him as a “human rights champion” and an “enemy of many dictators”.

Hossein Abedini was among several members of the National Council of Resistance of Iran who laid flowers and framed photographs of the MP near the church where he died.

Mr Abedini said: “Sir David had a very important role in supporting the people of Iran, the uprisings happening in Iran and Iranian refugees in Camp Ashraf.” As part of this, Sir David had recently called on the Government to ban Iran’s president Ebrahim Raisi, a hardline cleric, from attending the Cop26 global climate summit in Glasgow, Mr Abedini said.

Another group that paid their respects was the Greek Orthodox Church of St Barbara, St Phanourios and St Paul the Apostle, based in Westcliff-on-Sea.

A note left with flowers by the church said: “We are all so shocked and saddened to hear of the awful news. We sincerely thank you for all your hard work and support towards the Greek community of Southend and your tireless efforts to bring peace to the island of Cyprus and for both communities to lovingly live together.” Father Panayiotis Anastasiou, who laid the flowers, said: “This was so shocking and terrible and you never expect this to happen in your area.

“We knew Mr Amess for many years and he came to our meetings for over 20 years. We considered him a friend. He tried to do as much as he could for us, but not just by bringing the communities together across Southend, he also worked for us internationally to help the situation in Cyprus.

“He will be so very missed.”

Sir David campaigned for years for Southend to become a city, mentioning it most weeks in Parliament.

Just days before his murder, he told BBC Essex radio that his plan was “to wear them down”.

He said: “If they’re sick to death of hearing all the reasons why Southend should become a city then they should grant it to us, it’s a no-brainer, the benefits are enormous.”

Mr Lamb said at the tribute site yesterday the council was looking at ways to honour the late MP.

He said: “One thing we are looking at is that he was always keen for Southend to be a city. Pursuing that would be a great legacy.

“He never stopped working for us and a huge void has now been opened and who knows how it will be filled.

“We are working with his family to carry out their wishes on what they want us to do for Sir David.”

LBC radio presenter Maajid Nawaz launched the Quilliam Foundation, which sought to challenge the narrative of Islamist extremists, after Mr Amess successfully campaigned to get him released from an Egyptian jail in 2006.

He had been there since December 2006 in connection with his membership of the Islamist group Hizb ut-Tahrir, which aimed to establish an Islamic caliphate and implement sharia law globally. Speaking on LBC yesterday, Mr Nawaz said Mr Amess had stood up for his basic human rights at a time during the War on Terror when he had nothing to gain politically.

He said: “He was what he said on the tin and you knew what you got.

“You knew that he was genuine.

“He was committed to his work, his passions, his commitments and his people,” continued Mr Nawaz.

“Everyone who met him from left to right could see the human in him. He also tweeted: “I don’t speak for Southend Muslims, but I loved David.

“He attended our family weddings and he campaigned hard for my release.

“My Muslim family loved him.

He honourably defended me, mostly alone in Parliament, for years when I was a Prisoner of Conscience in Egypt.

“He was a good human being,” said Mr Nawaz.