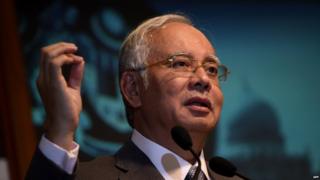 But in 2018, the then prime minister lost a general election to his former mentor, 92-year-old Mahathir Mohamad. The Barisan Nasional coalition, which had governed the country since its independence in 1957, was voted out of power.

Following the defeat, Mr Najib’s properties were raided and both he and his wife were charged with a string of offences.

He is now facing allegations of corruption linked to the multibillion dollar state investment fund, 1MDB.

Mr Najib has always denied the allegations and while still in office had been cleared by the country’s authorities.

But his time in office will likely be remembered as an era plagued with scandal and a strengthening of central power.

After earning an industrial economics degree from the University of Nottingham in the UK, Mr Najib returned to Malaysia in 1974 and worked for the state oil firm Petronas.

When he moved into politics, Mr Najib held numerous cabinet posts – as minister for energy, telecommunications, education, finance and defence – before becoming deputy prime minister to Abdullah Badawi in 2004.

When Mr Abdullah stepped down in 2009, he handed power to Mr Najib.

Mr Najib initially promised a more liberal political approach, but did not really follow through.

While he reformed tough laws on public gatherings and repealed the controversial Internal Security Act in 2011, he later reinstated detention without trial.

The following year, he also went back on a pledge to repeal a controversial sedition law and instead strengthened it.

Critics say the laws were a way for Mr Najib to silence his political opponents and to pander to the ethnic Malay-Muslim majority who formed his political party’s largest support base.

The opposition politician has since been pardoned by the new prime minister and is seen as a likely successor to Mr Mahathir.

In 2016, a security act aimed at combating terrorism was used to detain electoral reform activists.

Ahead of the 2018 election, Mr Najib’s government set up a law against spreading “fake news”.

The real blight of Mr Najib’s political career has been accusations of corruption and mismanagement over the state investment fund, 1Malaysia Development Berhad.

Mr Najib, members of his family and several allies are accused of embezzling huge sums allegedly used to buy everything from artwork to high-end real estate around the globe.

In July 2015 he replaced his deputy, who had criticised his handling of the affair, and the attorney-general investigating the case was dismissed for health reasons.

In January 2016 the new attorney-general cleared Mr Najib of wrongdoing but the criticism remained.

Ahead of the 2018 election, mass demonstrations in Kuala Lumpur called on him to resign.

After his defeat, authorities reopened their investigation and charged the former PM with money laundering, breach of trust and abusing his position.

He appeared in court for the first of several trials in April 2019, where he pleaded not guilty to seven of 42 charges. He is expected to appear for his second trial in August.