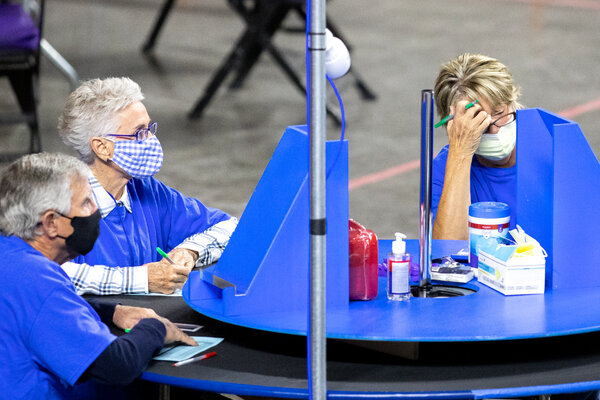 By Gail Collins and Bret Stephens

Ms. Collins and Mr. Stephens are opinion columnists. They converse every week.

Bret Stephens: Hi Gail. So it turns out that Joe Biden really did win Arizona last year. Are you … shocked?

Gail Collins: Pass the champagne, Bret. We’ll drink a toast to the fact that recount-wise, it’s been easy to find excuses to celebrate.

Arizona’s recheck showed Biden actually getting a few more votes than originally tallied. And some of the state’s Republican leaders nodded their approval — one called it “encouraging.” Despite one little cyclone of outrage spotted over Mar-a-Lago.

Did you start out here because it’s the only good news in the country right now? If so, appreciate the effort.

Bret: The truly bad news is that even this modestly good news is actually awful news.

Gail: Ah, welcome to our world.

Bret: What I mean is that this Republican-ordered, Republican-financed audit of ballots in Maricopa County, which is Arizona’s largest, won’t make any difference to Donald Trump’s true believers. There was a similar audit of votes in Michigan that finished earlier this year, also overseen by Republicans, which proved that Biden won that state, too, and it also didn’t have the slightest effect on the two-thirds of Republicans who, as of August, thought the election was rigged.

Gail: Congratulations — you’ve convinced me to be depressed again.

Bret: It reminds me of a line from Huck Finn: “Hain’t we got all the fools in town on our side? And ain’t that a big enough majority in any town?” That sums up Trump’s political strategy, and if the Biden presidency continues to stumble the way it’s been stumbling, it might just work.

Gail: We talked last week about Biden’s proposed budget, and, perusing the reader comments, I noticed many, many responses to your suggestion that it doesn’t include enough military spending.

Think you really hit a nerve on that one?

Gail: Wow, Martin Shkreli — the criminal ex-hedge fund manager who raised the price of a lifesaving drug by 5,000 percent. Love the way you bring up blasts from the not-so-distant past. How do people sign up for this fan club?