Paris Jackson is refusing to listen to anyone who criticizes her fashion choices — she’s still going to free the nipple. She doesn’t care that her gorgeous sheer lace dress for Paris Fashion Week showed off her nipple piercings because she believes in the freedom of choosing how to dress.

To hit back at the social media trolls, the 24-year-old model is doubling down on the nipple flash. She posted an Instagram Reel with the text, “my nipple piercing wanting to make another appearance after everyone got so angry last time.” There is a voiceover to the short clip, saying, “We cannot escape, we cannot come out. Mama?” While that is happening, Jackson looks around to realize it’s her nipples talking, which are peeping just behind her lacy maroon tank top.

Her fans supported her right to dress the way she darn pleases because no one should be policing her body. One follower wrote in the comments, “Rated “N” for none of their business.” Another added, “I am a 64 yr old Grandmother …. you do you , and don’t let them get at you, beautiful girl.” One social media account gave her advice from a Madonna song, “Express yourself don’t repress yourself.” Jackson has some solid people in her corner on this issue.

Jackson is joining a host of other Gen Z celebrities, who don’t think a nipple is a big deal at all (it really isn’t). Florence Pugh was body-shamed for her reveal recently, and Kendall Jenner talked about her first nipple-baring time on the runway — they are leading the way in destigmatizing women’s nipples when it comes to fashion.

Before you go, click here to see which other stars got naked on camera. 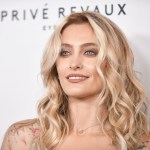