WARSAW (Reuters) – Poles were voting in droves on Sunday in a knife-edge presidential election, as the deeply polarised country makes a choice that could have major consequences for relations with the European Union. 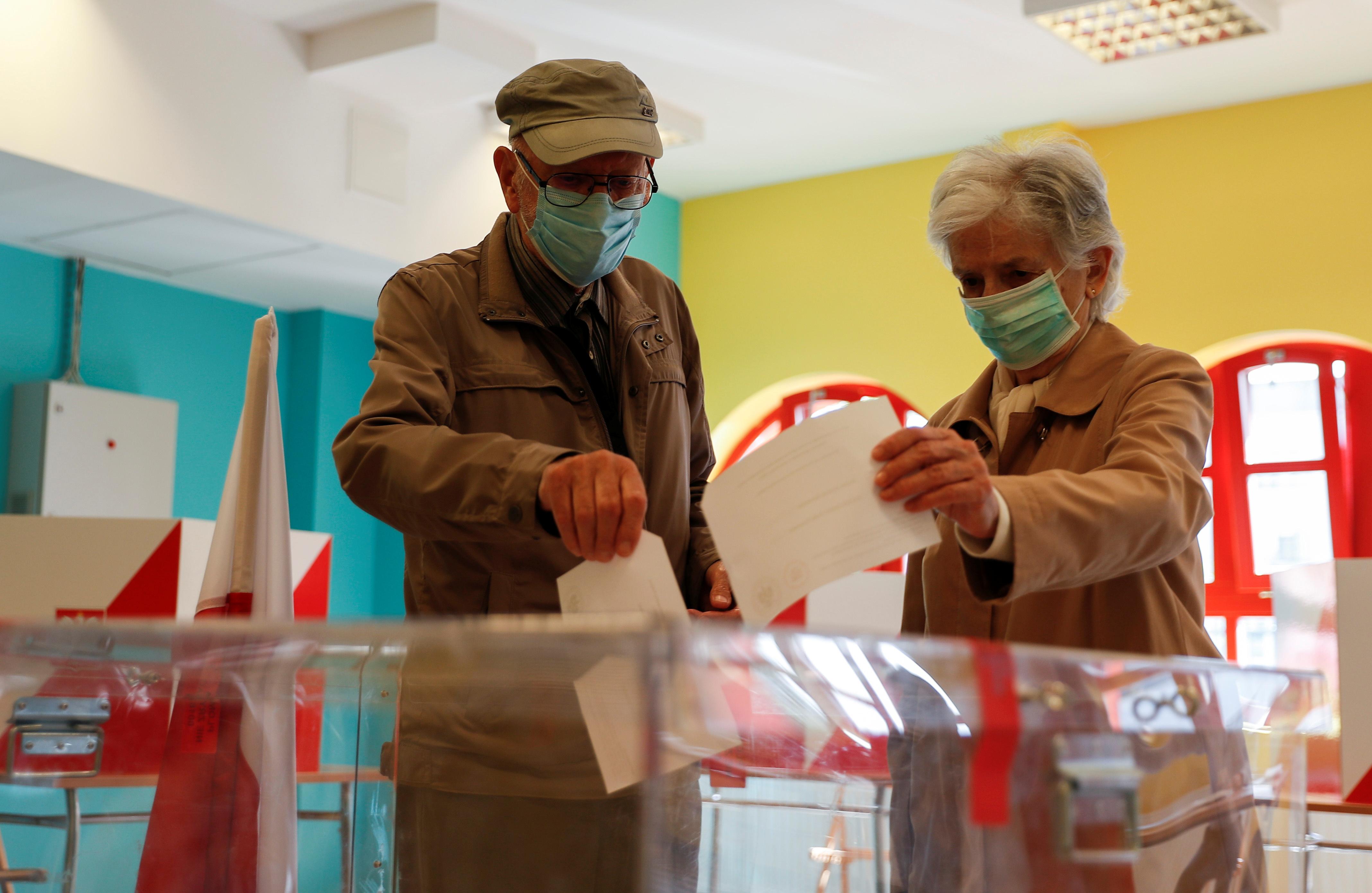 Incumbent Andrzej Duda, an ally of the ruling nationalists Law and Justice (PiS), is facing Warsaw Mayor Rafal Trzaskowski in a contest that highlights a divide between conservative, Catholic Poland and a country that seeks to be more open and socially liberal.

The election will determine if the government can deepen judicial reforms that the European Union says increase political control over the courts. The president holds the power of veto and Trzaskowski has promised that if he wins he will block legislation that he believes would undermine democratic norms.

Given that Poland’s president holds few executive powers, it is unlikely Trzaskowski could bring about significant change if he won. But with the presidency as well as the upper house of parliament in opposition hands, PiS’s ability to implement its agenda would be hampered.

Krystyna Engelking, 84, a retired university professor outside a polling station in southern Warsaw said that maybe the vote “could be like the first pebble of an avalanche that could bring some improvement”.

Polling stations in the election, a run-off after a first round on June 28, close at 1900 GMT, at which point the results of an exit poll will be announced.

Turnout at 1000 GMT was 24.73%, slightly higher than at the same time during the first round and more than seven percentage points higher than in the last presidential election in 2015.

Duda has painted himself as a defender of Catholic values and of the generous social benefit programmes that have transformed life for many, especially in the poorer rural regions of the country, the EU’s largest post-communist member.

He has also championed large infrastructure projects which he says will create jobs and boost the country’s autonomy and international standing.

“In my opinion we should battle for independence,” said Bogdan Kwiatkowski, 81, a pensioner from Warsaw. “Democracy exists (in Poland) and it is in a very good state.”

But while Duda vows to stand with the weak, critics say his campaign has also drawn on homophobia and anti-Semitism.

He has compared what he calls LGBT “ideology” to Soviet-era communist indoctrination, while state TV, the mouthpiece of the government, has used the sensitive issue of Jewish property restitution to attack Trzaskowski.

For many religious conservatives in Poland, Trzaskowski, mayor of Warsaw since 2018, came to represent the threats facing traditional values when he pledged to introduce sex education and education about LGBT rights in the city’s schools.

The Archbishop of Krakow, Marek Jedraszewski, told worshippers in the southern city of Czestochowa on Saturday that Poland faces a “lethal danger” from ideologies that seek to undermine the traditional family structure and corrupt children.

“Have you ever heard such homophobia, such anti-Semitism, such attacks on everybody who is brave enough to say ‘we have had enough’,” he asked supporters on Friday, contrasting PiS’s use of language with that of opposition politicians.

He has stressed that he would leave PiS’s social benefit programmes intact and not seek to raise the retirement age.

Trzaskowski has tried to portray himself as someone who can unite a divided nation, but many observers say a period of bitter conflict between the PiS-dominated parliament and the presidential palace awaits if he wins.