West Midlands Police has apologised after a man was threatened with arrest and forced into a police car as he refused to give an officer his name while travelling to work in lockdown.

Alarming footage showed a cop ignore social distancing as he called the man ‘an idiot’ and told him ‘you’re going to get locked up’ in Solihull, West Midlands, on Wednesday.

Anyone stopped by police does not have to give their name and address, unless the officer points out an offence they reasonably suspect the person to have committed.

The force admitted the officer’s conduct ‘fell far below what we’d expect’ in a statement on Thursday night.

The incident will be addressed in an action plan set out ‘for his learning and development’, they said.

A statement posted to Twitter read: ‘#SORRY | We’ve reviewed video footage of one of our officers challenging a man near #Dorridge train station, #Solihull yesterday morning.

‘It’s clear that the officer’s conduct fell far below what we would expect. His manner was not acceptable, not the face of @wmpolice and we will deal with the situation.

‘The officer has accepted his behaviour was not up to our high standards and we will address this as part of an action plan for his learning and development. 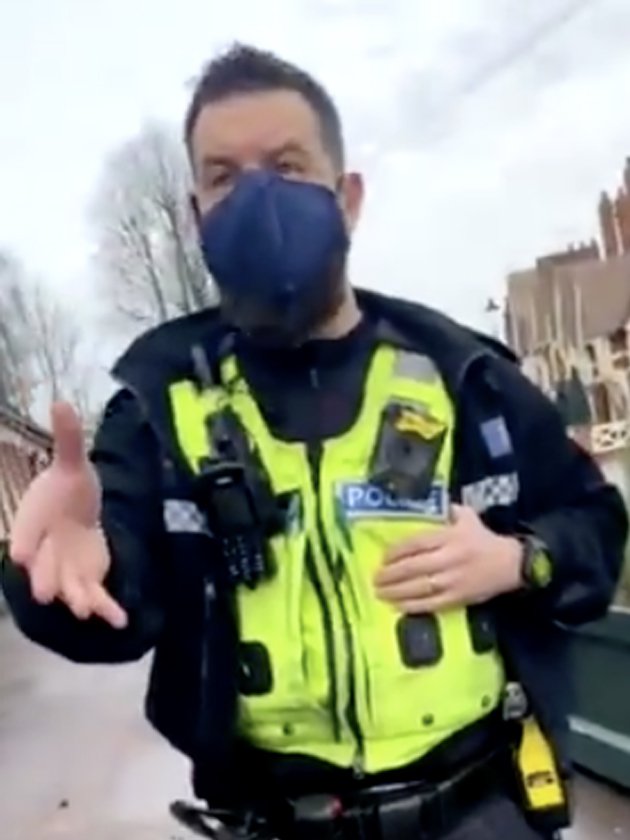 ‘The officer was with a colleague on patrol & part of their duties was ensuring people are adhering to CoVID restrictions.

‘The man explained he was heading to work – that’s clearly a justifiable reason to be out and about and there was no suspicion he had committed any offences. As such, he should not have been challenged in the way he was.’

The man told the officer he didn’t need to know who he is as he ‘hasn’t committed an offence’ during the confrontation on Wednesday.

Moments later, the incident became heated, with the cop accusing the man of lying.

He said: ‘I don’t know you live round here. You’re arguing with me, that gives me reasonable suspicion that you’re telling me lies.’

The officer then added: ‘We’re the police, we’re not just someone, you idiot.’

Appearing to grab the man’s wrist and pull him in the police car, he said: ‘Sit in there, we’ll see what you’ll say at the station then. You’re going to be late for work.’

A second video seemed to show a struggle in the vehicle as the officer demanded the man put on his seatbelt.

Under coronavirus laws, a police officer can carry out an arrest if they have reasonable grounds to suspect a person has committed an offence.

However, they should encourage individuals to go home before attempting other methods of enforcement.