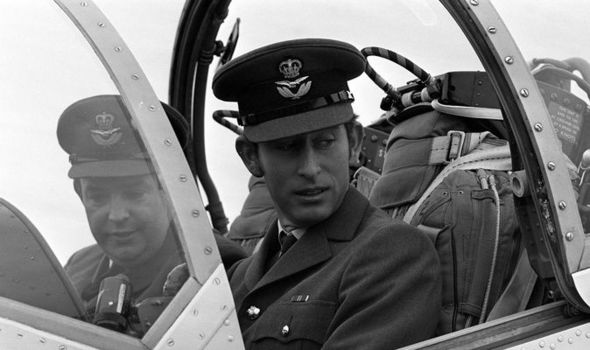 But on July 27, 1971, a hard-working RAF Vulcan crew tasked with carrying Britain’s nuclear deterrent was joined by a special crewmember, codenamed “Golden Eagle”. The Prince of Wales would be taught how to drop a nuclear bomb during the mission over England. The 22-year-old heir to the throne, already a keen pilot, was about to become the first member of the Royal Family to earn his RAF wings.

Flight Lieutenant Wales’ four-month training was also to include a very special mission: a three-hour practice run in a Vulcan. Had he had to drop a nuclear bomb for real it would have killed all its crew.

Pictures show the fresh-faced prince – who was just weeks away from meeting his second wife-to-be, Camilla Shand – clambering up the ladder of the mighty V- shape bomber at RAF Waddington, Lincolnshire.

Once in the co-pilot’s ejector seat, the bomber flew to Scotland before swinging back again, descending to just 500 feet as it made its way to its target in Staffordshire. Former Vulcan pilot Squadron Leader Martin Withers recalled that day.

“Our role was to launch nuclear strikes against the USSR, and we were constantly training,” said Mr Withers, 75, last night. “I was a co-pilot – I’m afraid Prince Charles took my seat on the aircraft, so I wasn’t actually on board, but I know he flew a good part of the mission himself.”

Addressing new RAF graduates last year, Prince Charles – now Marshal of the Royal Air Force- said: “I can remember, very nearly fifty years ago, being on parade for my own Flying Graduation, here at RAF Cranwell, in 1971.

“Believe it or not, I was part of the very first graduate entry course at the time. My father was the inspecting officer and it was a very proud moment after all the effort that had gone into eventually gaining my wings.” The five-man crew faced many challenges on their mission.

By 1971, RAF Vulcans had been forced to change their tactics and fly low – sometimes only 300 feet – to avoid detection by Soviet radars. “After the Soviets shot down CIA pilot Gary Power in his U2 surveillance aircraft, we realised their missiles were developed enough to be a real threat. We couldn’t fly at 50,000 feet any longer,” he said.

“We had no defensive armaments so we relied on staying hidden. We’d take circuitous routes and, given the choice, would fly by night and in poor weather. It was a different sort of stealth to today’s aircraft.”

He added: “Prince Charles would have flown to his target at around 500 feet above sea level. 500 feet sounds low, but when the Dambusters practiced on the Derwent Dam, they were just 30 feet off the ground. Of course we didn’t have bouncing bombs. And we’d just carry the one. One was all we needed.”

Dropping that bomb for real at just 300 feet would probably have killed its crew, recalled Vulcan pilot Air Commodore Edward Jarron. “Though it had a 30-second delay, we knew the shockwave would soon catch up with us,” he said last night.

“They warned us there may be some structural damage to the aircraft. Whether we’d have ridden it out or not is something which, thankfully, we never had to find out.”