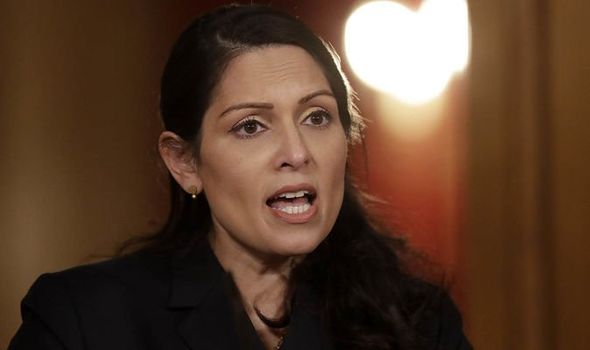 Writing exclusively for the Daily Express, Ms Patel, 49, criticises the Police Federation and its claims that Britain’s 153,000 officers are being taken for granted by the Government.

In what will be seen as a firm response to stinging Federation comments, she says: “Police officers are not interested in politics – they want their Government to take practical action that helps them get on with their job.”

Relations between the union and Ms Patel, who has been Home Secretary for exactly two years, have soured since frontline officers were denied priority for Covid jabs, despite tackling mask-less yobs flouting lockdown rules.

But they reached a new low last week when, unlike public sector colleagues in the NHS, fire service and local government, police were denied a pay rise. The Federation passed a vote of no confidence in Ms Patel and withdrew from the police remuneration review body.

On Tuesday, Federation chairman John Apter delivered a letter to 10 Downing Street, which told Prime Minister Boris Johnson the pay freeze was the “final straw”. Speaking of the brave frontline officers, some of whom she has met this week, Ms Patel said: “They want to clamp down on violent crime, smash up county lines drug gangs and get knives off our streets.

“I will always fight to give them what they need to do their job without fear or favour.”

She said when she became Home Secretary she gave a “clear message” that she was determined to cut crime and make Britain safer.

Ms Patel also told police officers: “I will give you the tools, powers, and backing to get out into our communities and keep us safe.”

She said: “That is what the British people expect.

“Officers make extraordinary sacrifices day in and day out, but they have my unconditional support to cut crime and keep the public safe.” But Mr Apter said: “Last week’s confirmation of a pay freeze for police officers, while firefighters and local government workers get 1.5 per cent and many in the NHS receive three per cent, was a real kick in the teeth for my colleagues. It was the final straw.”

Several chief constables have also expressed disgust as ill-will intensifies after officers, some earning just £24,780 a year, lived in fear of catching the deadly virus while enforcing the Government’s Covid rules.

One of them who spoke out was Nick Adderley, chief constable of the Northamptonshire force.

He said: “Over the past 18 months I have seen officers punched, stabbed, shot, persecuted and ridiculed while attempting to implement confusing, rushed and ambiguous legislation in order to protect the public and rightly, the NHS, only to be ignored when it comes to a pay settlement.

“The announcement of a nought per cent pay increase is quite frankly an insult and wholly unacceptable.

“Pay aside, this indicates a complete lack of awareness, appreciation or recognition for the incredible work officers have done throughout this pandemic.” A major Daily Express investigation discovered more than 20,000 officers were attacked during lockdown – a rate of almost 50 a day.

Each injury resulted in 21 days lost to sickness.

John Robins, chief constable of West Yorkshire Police, said: “A punchbag gets hit from every side; it feels a little like that in policing at the moment.

“They are punched, kicked, pushed and spat at every day. They are also racially and religiously abused or insulted because of their gender or sexual orientation, but that is another sad story.

“Worst of all, last week we saw officers who have been working on the front line of the pandemic not deemed worthy of a pay rise, yet colleagues in local government and the fire service were. Now that is shocking.”

The Federation’s rebuke has deepened divisions between the police and the Government, which had started to improve after reaching a low when Theresa May was home secretary from 2010 to 2016.

At its annual conference in 2012, Mrs May was heckled as she tried to justify budget cuts of 20 per cent while embarking on a radical reform agenda, telling officers they had to share the austerity pain.