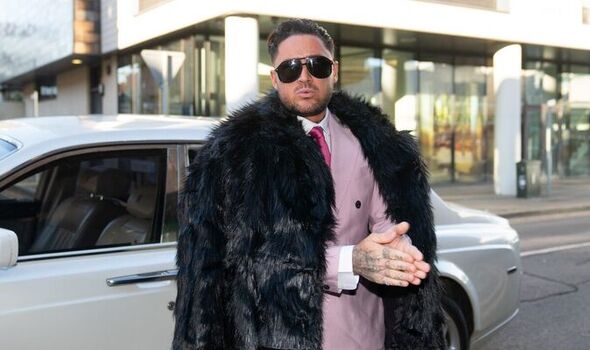 The reality star posed for photos as he arrived in court in a white limo wearing a pink suit and an oversized fur coat.

On the opening day of the trial the court heard that the former Ex on the Beach star made just shy of £40,000 from the subscription-based site after he opened the account in October 2020 up until its deactivation in December.

On the night in question, Ms Harrison said she went to Bear’s house in Loughton, Essex where the pair ended up drinking throughout the day and eating lunch at a local Turkish restaurant.

They then returned to Bear’s home where they “chatted, had a laugh and drank tequila shots and wine”.

She told the court she had “absolutely no idea” he had CCTV until he mentioned it later.

Ms Harrison said: “He was like ‘Oh babe I just realised some of that might have been on my CCTV’.

“I didn’t think in a million years it was caught from start to finish.”

She said after briefly skimming through the 20-minute footage on a screen in the kitchen, she asked him to send it to her phone so she could look at it the next day.

She said: “I knew in the morning I was going to want to know what was on there.

Ms Harrison continued: “I was trying to explain if he ever sent it to someone and it came out it would have a serious effect on our lives. He was making me feel like I was over-exaggerating about something that wasn’t intentional.

“As I got more serious about the subject, he stopped being so humorous. He just seemed like he understood and seemed quite compassionate and at that point was being nice to me trying to stop me from crying.”

Ms Harrison said she next saw Bear a month later for his sunbed shop launch but shortly afterward was told by a man he had seen footage of her giving Bear oral sex.

She told the court that whilst on holiday she began to receive messages warning her that a video of her and Bear had been posted online.

Jacqueline Carey KC prosecuting said the defendant was “effectively selling the footage for get money”.

Ms Carey said Bear later uploaded the footage “either himself or had it uploaded to OnlyFans and profited financially”.