The daughter of the late Lisa Marie Presley, 33, and the Pirates of the Caribbean actor, 36, star as lead singers of a fictional 70s band in the upcoming Amazon Prime series.

Based on the best-selling novel by Taylor Jenkins Reid, and executive produced by Reese Witherspoon, the progamme details the rise and precipitous fall of the renowned rock group before they call it quits at the peak of their fame

Daisy Jones & The Six sees the musicians, decades after their split, finally agreeing to reveal the truth behind that painful decision in the mockumentary style drama.

The first trailer for the much-anticipated series sees Daisy (Keough) walk up to a stage, with thousands of fans chanting her name, before exiting a private jet emblazoned with their band name.

The clips then shows Daisy Jones & The Six looking exuberantly happy while performing in extravagant costumes in arenas, but the illusion is shattered with the announcement: ‘Their break up made them legends.’ 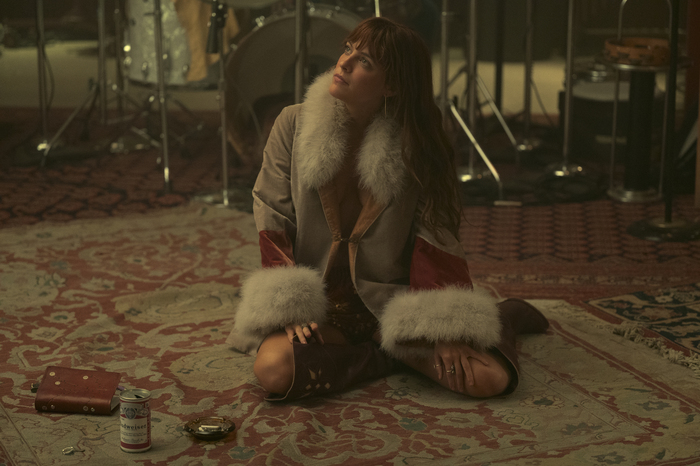 Speaking to the camera, Daisy reveals: ‘Look I know I told you I would tell you everything. But how much of everything do you really want to know?’

‘You write songs about who you wish you were not who you are,’ she continues to Billy (Claflin). ‘What about if you wrote songs about the guy who wants things he shouldn’t?’

Next is a montage of sound checks, backstage revelry, and Billy hugging what could be a lover in an 80s, Architectural Digest-approved, swag pad in LA.

‘Who’d want to hear a song about that?’ Billy remarks, with Daisy replying: ‘I think everybody would’.

The trailer also shows clips of Daisy cradling a newborn in hospital, Suki Waterhouse, who plays Karen Sirko, welling up and a violent-looking punch-up.

The trailer comes a couple of weeks after Riley’s mother Presley died suddenly on January 12 aged 54, leading to an outpouring of grief and love from around the world.

The singer’s death was confirmed by her mother, Priscilla, after she was rushed to hospital following a cardiac arrest.

Riley has paid tribute to her mother in tender Instagram posts, including one of her as a child, and a second which captured the last time she saw her ‘beautiful mama.’

At the singer’s memorial service in Graceland, which was attended by Elvis actor Austin Butler, a eulogy penned by Riley was recited.

Her eulogy read: ‘I hope I can love my daughter that way you loved me. The way you love my brother and my sisters. Thank you for giving me strength, my heart, my empathy, my courage, my sense of humour.

‘We are you. You are us, my eternal love. I hope you finally know how loved you were here. Thank you for trying so hard for us. If I didn’t tell you every day, thank you.’

Daisy Jones & The Six lands on Amazon Prime on March 3, with episodes rolling out weekly until March 24.

Daisy Jones & The Six premieres on Amazon Prime on March 3.

You can follow our new Snapchat show Pop Cultur’d, the go-to place for all things pop culture.

Keep up with the latest Showbiz exclusives by following Metro Showbiz on Snapchat.

And football fans can indulge in all the transfer gossip and more on Metro Football on Snapchat.