Rubén Blades is a renowned vocalist, one of the emblematic singer-songwriters of 1970s salsa. But he’s not always recognized for his achievements in other disciplines: He’s also a Broadway and Hollywood actor, a composer, a Harvard Law School master’s graduate and a one-time candidate for president of his native Panama. And don’t ever say he can’t sing a swing tune like Frank Sinatra or Tony Bennett.

“We’re still segregated in many ways when it comes to music,” Blades, 72, said in a video conversation from his home in Manhattan. Outside of a few more wisps of gray in his beard, he hasn’t changed much, dressed in his typical all-black with an omnipresent porkpie hat. “People think, if you’re a salsero that’s what you’re going to do in your life. It’s like you’re a horse, racing with blinders on — I don’t wear those things. For me, music is subversive, because art is subversive. You change things.”

Blades’s ambitious new project with the Panamanian big band leader Roberto Delgado celebrates the fruits of evolution and cultural blending: the connections between Afro-Cuban music and jazz. It has arrived over the course of April in three different packages: “Salswing!,” an 11-track album that freely mixes salsa classics like “Paula C.” and “Tambó” with jazz standards like “Pennies From Heaven” and “The Way You Look Tonight”; and “Salsa Plus!” and “Swing!,” which emphasize the tracks from those genres.

Jazz has been flowing through Blades’s work for longer than many listeners realize. “Pedro Navaja,” arguably salsa’s most popular song, is best remembered as an unusually long piece that was initially frowned upon by the radio industry. According to Blades, a trio of heavyweight radio D.J.s told him that “Siembra,” the 1978 album it appears on, which he recorded with the trombonist and arranger Willie Colón, would ruin Colón’s career. The song was actually derived from “Mack the Knife” from Bertolt Brecht and Kurt Weill’s “The Threepenny Opera.” Blades had been smitten by the Bronx-born Bobby Darin’s hit rendition while growing up in Panama.

“I heard that version in 1959 — I really liked the feel of it, the attitude, the insolence,” Blades said.

Blades’s wife, Luba Mason, a similarly eclectic jazz singer he met when they both appeared in Paul Simon’s short-lived musical “The Capeman,” credits Blades’s mother, Anoland Díaz, with his passion for show music. “She loved the theater, playing the piano and singing,” she said. “I was a classical pianist for 13 years and when he heard that I think it sparked memories of her.”

While Blades’s interest in recording in English goes back to “Nothing but the Truth” from 1988, which featured collaborations with Elvis Costello, Lou Reed and Sting, the “Salswing!” project had its roots in a performance he did in November 2014 with Wynton Marsalis’s Jazz at Lincoln Center Orchestra.

“I’d always been drilling Wynton with Afro-Caribbean music and he started loving it more and more,” said Carlos Henriquez, the bassist and musical director of the orchestra’s cultural exchange with the Cuban Institute of Music in 2010. “So I told him, look, we could do this whole thing with Latin and swing, and the vocalist we should work with is Rubén Blades.” 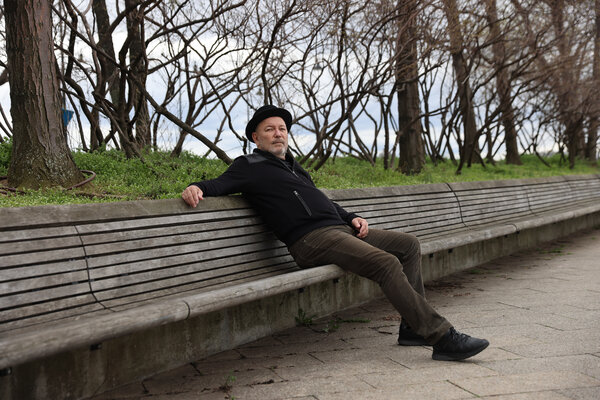 For the 2014 show, which featured Blades singing Gershwin’s “They Can’t Take That Away From Me” alongside the Héctor Lavoe standard Blades wrote, “El Cantante,” he began to use the term “mixtura,” Spanish for mixture, as a kind of branding for Latino hybridity. Blades’s sense of mixture is emblematic of how many artists and intellectuals have viewed Latin American culture as a whole — a layered conglomeration of racial and cultural influences, an identity defined by difference. He sees himself as a kind of creolized vessel of voices from Panama, Havana and New York (both uptown and downtown).

“The connection between jazz and Afro-Cuban music is very well documented,” said Blades, whose grandfather was born in Louisiana and moved to Havana to fight in the Cuban War of Independence from Spain. The interchange of musical knowledge between New Orleans and Havana was crucial to the development of jazz and Afro-Cuban music. New Orleans — which is also Marsalis’s hometown — was “a melting pot of Cuban, French, Haitian, African-American, even Mexican musical influences,” said Henríquez. The ragtime jazz pianist and arranger Jelly Roll Morton famously asserted in an Alan Lomax field recording that he often played with a “Spanish tinge,” that was actually an incorporation of a Cuban rhythm called the habanera.

Musicians from Latin America have also played a key role in the development of jazz through the decades: The Harlem Hellfighters, a World War I infantry unit that doubled as a jazz-oriented Army band, was made up of about a third of Afro-Puerto Ricans. Mario Bauzá, a transplanted Afro-Cuban, worked with Chick Webb, Cab Calloway and Dizzy Gillespie. And the avant-garde saxophonist Eric Dolphy was a Panamanian immigrant. “Luis Russell, a Panamanian pianist, was with Louis Armstrong for years,” Blades also pointed out.

Increasingly it’s become clear that a dominant strand of mixtura is Blackness. Afro-Puerto Rican figures have been central in Blades’s career, and to salsa. Blades has spoken of the singer Cheo Feliciano as his primary influence. He’s praised Tito Curet Alonso as the genre’s master songwriter. And on “Salswing!,” he’s included a high-energy remake of Pete “El Conde” Rodríguez’s “Tambó,” a paean to African drumming.

“The understanding of the African drum is what enables you to play both styles,” said Henríquez.

On “Salswing!,” Blades creatively navigates the intersection between the waning days of extravagant, high-modern big band jazz and recession-era, stripped-down salsa. He sticks to his trademark staccato sonero style on the salsa remakes “Contrabando” and “Tambó,” but on the bolero “Ya No me Duele,” some of the higher-register, Ella Fitzgerald-ish scatting he uses on “The Way You Look Tonight” and “Pennies From Heaven” seeps in.

The album also includes elegantly arranged swing standards like “Paula C.,” a post-breakup chronicle about one of Blades’s first mature romances. He wrote it soon after he arrived in New York in the mid-70s, when he was working in the mailroom for Fania Records — known as the Motown of salsa — and subletting an apartment from Leon Gast, who directed the classic salsa documentary “Our Latin Thing.”

“It was a very inspiring time, in terms of creativity,” Blades recalled, citing the city’s thriving jazz and salsa scenes. “Everybody was at their best at that time, downtown punk rock was exploding, and you could still go to Tad’s Steaks and get for $1.99 a steak with a potato and corn on the cob.”

While the material on “Salswing!” is very much a retrospective, Blades is still quite engaged with the present and busily pursuing projects with singers he admires. He just finished a track with the revered Cuban vocalist Omara Portuondo, the effervescent Mexican singer Natalia Lafourcade and the Argentine folk-rocker León Gieco. And following a prepandemic concert in Puerto Rico, he even had a chance to elevator pitch one of the biggest stars of global pop: Bad Bunny.

“We played three and a half hours and he showed up with his mother and his father,” Blades said. “He was so super respectful, not only to me, but his parents. And then I asked him, in front of his dad, ‘Listen, I have a mortgage to pay, why don’t we do something?’ And everybody laughed.”