Over the last year, New York politics have appeared to lurch ever leftward. First came the primary victories last summer in a series of House and state legislative races, then the legalization of recreational marijuana, and just this week, a state budget agreement that would raise taxes on the wealthy and create a $2.1 billion fund to aid undocumented workers.

But in the New York City mayor’s race, the two candidates who have most consistently shown strength are among the most moderate in the field.

The sustained polling leads of Andrew Yang followed often by Eric Adams have made some left-wing activists and leaders increasingly alarmed about the trajectory of the race, leaving them divided over how to use their considerable influence to shape its outcome before the June 22 primary.

“From my perspective on the left in New York, there’s definitely a little sense of disappointment around how the race is shaping up right now,” said Matthew Miles Goodrich, who is involved with the Sunrise Movement, an organization of young climate activists. “There seems to be a mismatch between who is leading in the New York City mayoral race and the tenor of the times that we’re supposed to be living in.”

The mayoral field still reflects the leftward shift of many Democrats in the city, with many voters just beginning to tune into the race. Scott M. Stringer and Maya Wiley, two of the most progressive candidates in the race, are generally discussed as part of the field’s top tier, with the expected resources to be competitive through the end, and perhaps to break out in a meaningful way. Dianne Morales, a former nonprofit executive, has undeniably captured real grass-roots energy. 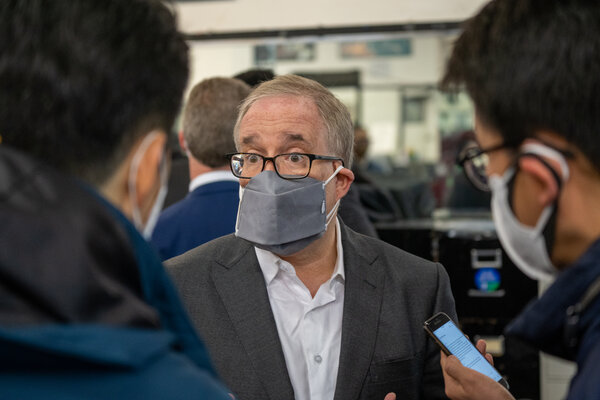 But for now, no one doubts that Mr. Yang, the former presidential candidate, and Mr. Adams, the Brooklyn borough president, are in especially strong positions, with Mr. Yang in particular consistently topping polls.

That emerged as a significant concern at a private meeting on Wednesday of representatives from several prominent left-wing organizations, including Our City, Democratic Socialists of America, Sunrise and other groups, according to two people familiar with the meeting. A consensus emerged that the left needed to mobilize urgently around the city elections, according to one of those people.

Mr. Adams and Mr. Yang embrace progressive positions on a wide range of issues, and their allies say that they are well within the mainstream of the Democratic Party — far more so, they argue, than some left-wing activists are. And on Friday afternoon, as he campaigned in Coney Island, Mr. Yang heaped praise on the new state budget as well as marijuana legalization.

But it is also true that they are relatively friendly toward the business and real estate communities. And on the spectrum of mayoral candidates, they are also more moderate on policing matters, even as they promote criminal justice reform. (Indeed, Mr. Adams, a Black former police officer who says he has experienced police brutality himself, spent much of his career urging changes in the system, but he is also a onetime Republican who speaks often about the constructive role he believes policing can play in promoting public safety.)

Those stances are sharply at odds with the anti-real estate, anti-corporate and “defund the police” rhetoric that has animated the left-wing New York scene in recent years — and in particular after the killing of George Floyd last May — but that has largely been untested in a citywide race.

As more voters tune in, the contest will offer the clearest picture yet of the political mood of a large, racially diverse city on issues surrounding economic recovery, a rise in violent crime and deep inequality that the coronavirus pandemic has only worsened.

Across the city, younger left-wing activists have been part of a coalition that has shaped legislative and House races. But that contingent has not been determinative in statewide races for governor or, at a national level, in the presidential campaign, where moderate Black voters and other older, more centrist voters played a decisive role in giving President Biden the nomination.

Even as some activists worry about the state of the mayor’s race, many are struggling to coalesce behind one of three candidates most consistently mentioned as progressive contenders: Mr. Stringer, the well-funded city comptroller who boasts a raft of endorsements from left-wing lawmakers; Ms. Morales, who is perhaps the most left-wing candidate in the race; and Ms. Wiley, a former MSNBC analyst and counsel to Mayor Bill de Blasio, who on Friday was endorsed by Representative Yvette Clarke, a Brooklyn Democrat.

“The progressive community in New York is divided,” said Mr. Goodrich, who favors Mr. Stringer. “No one has emerged as the clear, viable progressive hero, progressive champion. That’s made it tough for anyone to break out.”

The race for city comptroller offers a sharp contrast: Some of the nation’s most prominent progressives, including Representative Alexandria Ocasio-Cortez of New York and Senator Elizabeth Warren of Massachusetts, have lined up behind City Councilman Brad Lander. They have not yet engaged in the mayor’s race, and it is not clear that they will.

To many on the left wing of the New York political spectrum, the victory of either Mr. Yang or Mr. Adams would represent a loss for a movement that has gathered strength since Ms. Ocasio-Cortez toppled Representative Joseph Crowley, the Queens County Democratic leader, in the 2018 primary.

Certainly, there is still plenty of time for the most liberal voters in New York to unite around a candidate or slate of candidates; under the city’s new ranked-choice system, voters rank up to five candidates in order of preference. If a candidate garners more than 50 percent of the vote, that candidate wins. If not, the last-place candidate falls out of the race, and the voters who made that candidate their first choice get their second-choice votes counted instead. The runoff continues until there is a winner.

A number of lawmakers and other Democrats have offered ranked-choice endorsements — especially of Mr. Stringer and Ms. Morales — and organizations that are currently weighing endorsement decisions could make the same call or support a slate of candidates.

The Working Families Party is in the process of deciding its endorsement, which could be influential and come as soon as next week. Mr. Yang and Mr. Adams are among the candidates participating in that process along with other more left-wing contenders, according to some familiar with the conversations.

Mr. Yang and Mr. Adams each claim to be the most attuned to New Yorkers’ concerns around the economy, reopening the city and the balance of public safety and police reform.

Mr. Adams has also cast himself as a business-friendly candidate who sees no need to demonize real estate. “I am real estate,” Mr. Adams, who owns a multifamily property in Brooklyn, has said. Mr. Adams also previously led an organization that advocated criminal justice reforms within the New York Police Department.

“It seems like he’s happy to tinker around the edges and continue to play the inside game with the N.Y.P.D., and I just don’t think that that has been effective,” said Charles Khan, the organizing director for the Strong Economy for All Coalition.

Mr. Adams’s team argues that substantively, on issues from housing to taxes, he has many of the same goals as the most deeply progressive activists. The difference, the team says, is a matter of tone. Advisers also argue that he has done more than any other candidate to personally press for police reform.

“Eric is not new to this, he has been in the fight for police reform for over 30 years and has the know-how to reform the N.Y.P.D. the right way and keep New York City safe,” said Madia Coleman, a spokeswoman for Mr. Adams. “No one in this race has fought harder or delivered more for people of color than Eric Adams.”

Mr. Yang, for his part, has floated the idea of giving tax incentives to corporations and individuals who return to the office five days a week and has suggested he feels the needs of businesses in his “bones.” He has also been a proponent of having more police patrolling the subways and, like Mr. Adams, is comfortable emphasizing the role he sees for the police in public safety

“We’re proud to be leading among progressive voters,” Sasha Neha Ahuja, a campaign manager, said in reference to internal polling. “Clearly Andrew’s message of cash relief, job creation and rebuilding a safe and vibrant city is resonating deeply within the base and across the city.”

Mr. Yang is also being advised by Tusk Strategies, which has emerged as an issue for some progressives. The consultancy has worked closely with Uber and the Police Benevolent Association, the union that endorsed President Donald J. Trump for re-election.

A spokesman for Tusk said the consultancy hasn’t worked for either organization in over a year.

“As an advocate and as a Black man, why the hell would I want to trust Andrew Yang after that?” said Stanley Fritz, the state political director for Citizen Action of New York.

It is unclear how the talk among progressives about mounting a campaign to stymie the rise of two well-funded candidates will manifest itself. So far, it has been just talk.

“I do think there is an effort congealing to not only push back on Yang but to push back on Eric Adams as well,” said Jonathan Westin, director of New York Communities for Change, which is supporting Mr. Stringer. “Both of them are not really aligned with the progressive movement.”