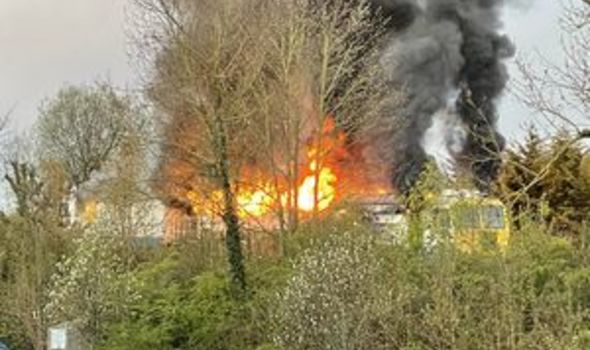 Emergency services were called to the train – which set on fire between Sevenoaks and Kent – at around 5am this morning. People in houses nearby have been told to shut their windows as the blaze rips through the carriages.

Kent Fire and Rescue Service tweeted: “Crews are working hard to contain a train fire close to #DuntonGreen, near #Rye in the #Sevenoaks area.

“There is likely to be disruption to train services for some time.

“People in the area are asked to close windows & doors due to a smoke plume, & to avoid the area if possible.”

One train driver shared a video of the fire as he waited in his train for the fire crews to deal with the blaze.

He tweeted: “Looks like the crew are all out.

“This is a driver’s worse nightmare.

“There are going to hours of delays through #DuntonGreen while @kentfirerescue help @NetworkRailSE get the railway back up and running for @Se_Railway.”

Network Rail Kent and Sussex said it will take “most of the morning” to clear the damaged train carriage.

They tweeted: “We are working with the emergency services after an engineering train caught fire near Dunton Green, blocking both lines between Sevenoaks & Orpington.

“Fortunately no one was injured & we’re now working out how to move the train so we can get @Se_Railway passengers moving again.

“Once we’ve moved the damaged tamper, a machine which restores the level of the track, we’ll need to check for damage to the track & what repairs might be needed.

“At the moment, we estimate it could take most of the morning to clear so check @Se_Railway for travel updates.

“We don’t know yet what caused the fire but are working with @kentfirerescue who are investigating.

“We have lots of people on site right now working to get passengers moving again and that’s our priority.

“We’re sorry for the disruption this has caused.”