Thrilled for the role, needing a paycheck and confident that the theater was safe, Jessika D. Williams left the actors’ union to take the part.

Jessika D. Williams, outdoors at the American Shakespeare Center in Virginia, where she is playing the title role in “Othello.” Credit…Melanie Metz for The New York Times

Jessika D. Williams has wanted to play the title role in “Othello” since she was a teenager.

Now she’s 35, with quotes from Shakespeare tattooed down both arms, and after years studying in Scotland, working in Britain and traveling the United States by van to perform in regional theaters, she finally got the part this summer, at the American Shakespeare Center, a destination theater in Virginia’s Shenandoah Valley.

There was only one hitch, but it was a big one: the coronavirus pandemic.

Actors’ Equity, the labor union representing performers and stage managers, barred its members from in-person performances around the country, citing safety concerns. The union then made a handful of exceptions, mostly in New England, where infection rates are low; the Virginia theater was among scores denied a waiver.

The American Shakespeare Center, located in a rural community with few cases and with a company of actors who signed an “isolation covenant” and live together, decided to proceed anyway, using nonunion actors and elaborate safety protocols.

Williams, who said she not only wanted the role but needed the work, made a decision no actor wants to make: She resigned from the union, potentially giving up a variety of benefits and protections, to take the part. 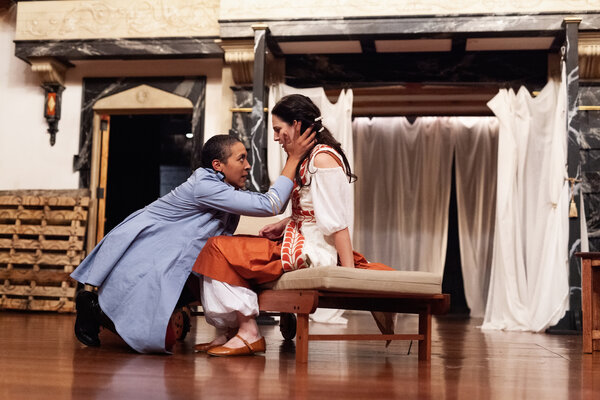 Now she is part of a troupe performing “Othello” and “Twelfth Night” in repertory, with each production being staged indoors, outdoors and online, so patrons can choose however they are most comfortable seeing the show. (The indoor stage, called the Blackfriars Playhouse, is described by the company as “the world’s only re-creation of Shakespeare’s indoor theater.”)

Actors’ Equity has been critical. The union accused the nonprofit theater of abandoning its commitment to safety and listed it as among a handful that are “no longer Equity producers.”

But the American Shakespeare Center sees the situation differently, noting that in normal years, it employs not only Equity and non-Equity actors at its home in Staunton, Va., but also a non-Equity touring ensemble that performs in Staunton as well as on the road. When the pandemic prompted the theater to cancel its main season, it decided to come up with a safety plan and stage the two plays now running with the nonunion company.

In a phone interview from Virginia, Williams talked calmly and confidently about her decision, the “Othello” production and the pandemic. Here are edited excerpts from the conversation.