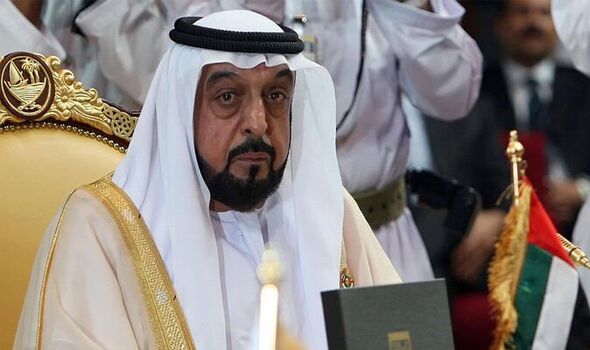 United Arab Emirates (UAE) President Sheikh Khalifa Bin Zayed Al Nahyan died on Friday, it was announced by the Ministry of Presidential Affairs. The UAE has announced a 40-day mourning period, and flags on all government buildings in the UK will be flown at half-mast until 8pm on Saturday out of respect.

Sheikh Khalifa had been the UAE’s second president since 2004 following the death of his father, Sheikh Zayed bin Sultan Al Nahyan, who was regarded as the founder of the UAE. He was also the ruler of the key oil state Abu Dhabi.

Sheikh Khalifa Bin Zayed Al Nahyan had experienced ill health in recent years and he had rarely been seen in public since he suffered a stroke in 2014.

Sheikh Khalifa was known to be a moderniser that aligned the UAE closer to the United States and its allies.

US President Joe Biden paid tribute to Sheikh Khalifa following the news of his death, declaring that he “was a true partner and friend of the United States”.

He said: “We will honour his memory by continuing to strengthen the longstanding ties between the governments and people of the United States and the United Arab Emirates.”

Prime Minister Boris Johnson also paid tribute on Twitter, writing: “I am deeply saddened to hear of the death of His Highness Sheikh Khalifa Bin Zayed Al Nahyan, President of the United Arab Emirates and ruler of Abu Dhabi.”

The news of Sheikh Khalifa’s death was announced by the official WAM news agency.

Who is the new president of the UAE?

While plans to elect a new president of the UAE were underway, the federation’s constitution outlines that vice-president Sheikh Mohammed bin Rashid Al Maktoum, ruler of Dubai, acted as interim president.

The rulers of the seven emirates are required to gather as the federal council to elect a new president within 30 days.

Subsequently, it was announced that Sheikh Mohammed bin Zayed Al Nahyan was elected as president of the UAE on Saturday.

Sheikh Mohammed, known by his initials as MbZ, has been the de facto leader of the UAE for years and Sheikh Khalifa was his half-brother.

He praised Sheikh Khalifa’s memory on Twitter as news of his death emerged, writing: “The UAE has lost its righteous son and leader of the ’empowerment phase’ and guardian of its blessed journey.”

MbZ has regularly been listed in publications such as TIME magazine and the New York Times as one of the most powerful people in the world.

MbZ has been elected at a time when the UAE’s long-standing ties with the US have been visibly strained over perceived US disengagement from its Gulf allies’ security concerns.

MbZ is credited with leading a realignment of the Middle East that created a new anti-Iran axis with Israel and fought the increased presence of political Islam around the region.

He also contributed to the increased standing of the UAE on the global stage with its status as a hub for oil and business, and by increasing its military strength.

He wrote: “We congratulate him and pledge allegiance to him as do our people…and the entire country will follow his leadership to glory.”