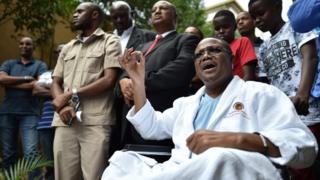 A prominent Tanzanian opposition figure who survived an attempt on his life in the capital, Dodoma, has returned to the country where he is expected to launch a bid for the presidency.

Tundu Lissu had been living in Belgium since he was shot three years ago and has undergone more than 20 medical operations.

Nobody was convicted for the attempt on his life.

While out of the country, Mr Lissu was stripped of his parliamentary seat.

Ahead of his return to Tanzania on Monday, Mr Lissu, as well as rights groups, had asked the government to guarantee his safety in the country.

The BBC’s Sammy Awami in Dar es Salaam says Mr Lissu’s next step in his bid for top office would be to win the Chadema opposition party’s nomination for the presidential race.

Mr Lissu is a staunch critic of President John Magufuli who is vying for a second five-year term at Tanzania’s general elections in October.

Though he has been praised for economic reforms and tackling corruption, President Magufuli’s government is under increasing scrutiny for crackdowns on press freedom and has been accused of under-reporting the spread of coronavirus in the country.

Flood warnings mapped: Is YOUR area at risk of flooding? Latest maps and charts