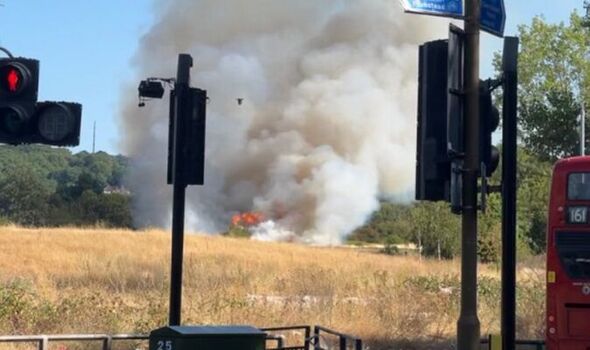 About two hectares of shrubland are on fire on Woolwich Common, according to London Fire Brigade (LFB). It is warning residents nearby to keep their windows and doors shut due to the smoke.

The Brigade received 48 calls about the fire and was first alerted at 4.18pm today. Crews from Plumstead, Eltham, Lee Green and other surrounding fire stations are at the scene, according to a statement issued by the LFB.

It said the cause of the fire is not known at this stage.

In Seaford near Brighton, firefighters from East Sussex Fire and Rescue Service are tackling a blaze at Seaford Head Golf Course which started at around 3.30pm today.

The fire covered an area roughly 100m by 200m, according to the service. The cause of the fire is unknown at this stage.

LFB has previously identified burning cigarettes and barbecues as “the worst offenders” for starting grass fires.

The blaze at Woolwich Common comes less than three weeks after the LFB declared a major incident as firefighters battled fires across the capital during July’s record-breaking heatwave.

On July 19 alone firefighters were dealing with a number of fires across London, including 30 in Upminster, Wennington, Pinner, Southgate, Croydon, Dagenham, Wembley, Hendon and Eltham.

The LFB called for a total ban on disposable barbecues last week in the wake of one if its busiest periods in history.

Fire service chiefs on Wednesday welcomed a move from Marks & Spencer to stop selling disposable barbecues amid the rise in wildfire incidents linked to the hot weather and climate change.

The retail giant had already stopped selling the product near national parks and in London in an effort to protect open spaces and reduce the risk of fires.

LFB hailed the action by Marks & Spencer as “good news”.